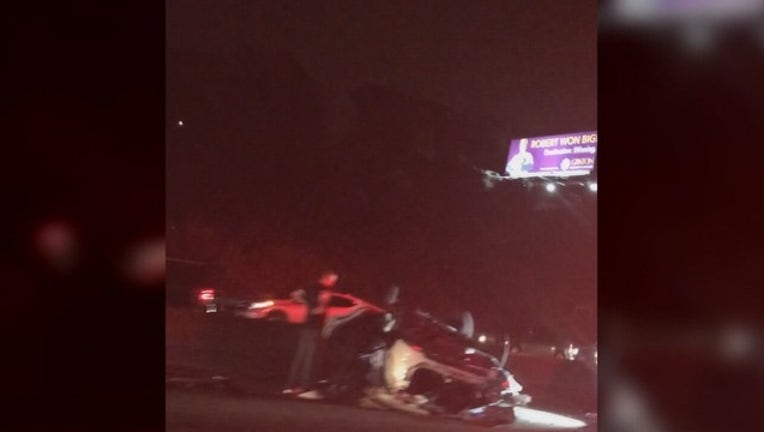 A still image taken from video that shows the scene of a deadly Nov. 2017 crash that left four people dead and injured at least six more on I-80 in San Pablo. Fred Lowe, 49, was found guilty of seven felonies and sentenced to 135 years to life.

(BCN) - A drunk driver found to be at fault for a collision that killed four people and injured at least six more on Interstate Highway 80 in San Pablo in 2017 has been sentenced to 135 years to life in state prison, the Contra Costa District Attorney's Office announced Friday.

Fred Lowe, a 49-year-old Sacramento resident with five prior DUI convictions, was found guilty of seven felonies, including the murder of four victims in the 2017 collision, prosecutors said.

Prosecutors said Lowe's blood-alcohol content was at 0.14 percent when his blood was drawn hours after the crash, and may have been as high as .24 percent when he was behind the wheel of an eastbound Mercedes-Benz that sideswiped a Nissan Rogue, sending it over the center divide and into westbound traffic around 8:15 p.m. on Nov. 25, 2017.

Jared Horn, a University of California at Berkeley student and pitcher on the Cal baseball team, was driving the Rogue and was the only occupant to survive the crash.

Five vehicles were involved in the collision, which left a debris field that spread out for several hundred feet on both sides of the roadway. At least five other injuries were reported.

After causing the collision, prosecutors said Lowe got off the highway and parked his visibly damaged vehicle in a residential area off of San Pablo Dam Road. He was found and arrested nearby later that night.