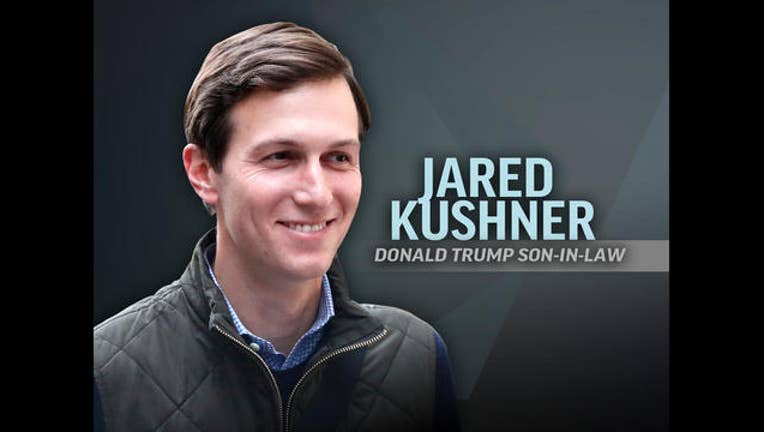 WASHINGTON (AP) -- If the FBI wants to talk to Jared Kushner about his Russian contacts, they won't have to track down the president's son-in-law. Amid reports the FBI is scrutinizing Kushner's encounters, his lawyer says he stands ready to talk to federal investigators as well as Congress about his contacts and his role in Donald Trump's 2016 campaign.

Federal investigators and several congressional committees are looking into Russia-Trump campaign connections, including allegations that there may have been collaboration to help Trump and harm his Democratic opponent, Hillary Clinton.

"The FBI tries to be thorough in their investigations," said defense lawyer Edward MacMahon, who is not involved in the case. "If it's been publicly reported that he met with Russians, and the investigation has to do with administration officials meeting with Russians, well, then, they'll probably want to talk to everybody."

Kushner was a trusted Trump adviser last year, overseeing the campaign's digital strategy, and remains an influential confidant within the White House.

One likely area of interest for investigators would be Kushner's own meetings with Russians, given that such encounters with a variety of Trump associates are at the root of the sprawling probe, now overseen by former FBI director Robert Mueller.

The White House in March confirmed that Kushner and Michael Flynn, the ousted national security adviser, met with Sergey Kislyak, the Russian ambassador to the United States, at Trump Tower in December for what one official called a brief courtesy meeting.

The Washington Post reported Friday that Kislyak told his superiors that he and Kushner discussed setting up a secret communications channel between the Trump transition team and the Kremlin.

The Post report, citing anonymous U.S. officials who were briefed on intelligence reports on intercepted Russian communications, said Kislyak told his superiors that Kushner proposed using Russian diplomatic facilities for their discussions, apparently to make them more difficult to monitor. The Post said Kislyak was reportedly "taken aback" by the suggestion.

Flynn was pushed out of the White House in February after officials said he misled Vice President Mike Pence about whether he and the ambassador had discussed U.S. sanctions against Russia in a phone call. Sally Yates, the former acting attorney general, told Congress this month that that deception left Flynn vulnerable to being blackmailed by the Russians. Flynn remains under federal investigation in Virginia over his foreign business ties and was interviewed by the FBI in January about his contacts with Kislyak.

Obama administration officials told The Associated Press earlier this week that the frequency of Flynn's discussions with Kislyak raised enough red flags that aides discussed the possibility Trump was trying to establish a one-to-one line of communication -- a so-called back channel -- with Russian President Vladimir Putin.

The news agency anonymously cited current and former U.S. officials. Kushner's attorney, Jamie Gorelick, told Reuters that Kushner "has no recollection of the calls as described."

Regarding Kushner, former FBI agent Jim Treacy said Friday: "If there is an investigation on anybody, would other folks around that person be of interest to the FBI as far as being interviewed? The answer to that is a big yes." If the FBI wants to speak with someone, it's not necessarily an indication of involvement or complicity, said Treacy, who did two tours in Moscow as the FBI's legal attache.

"Really, being spoken to, does not confer a target status on the individual," he said.

Investigators are also interested in a meeting Kushner had with the Russian banker, Sergey Gorkov, according to reports from The Washington Post and NBC News.

"Mr. Kushner previously volunteered to share with Congress what he knows about these meetings," Gorelick said in a statement Thursday. "He will do the same if he is contacted in connection with any other inquiry."

Another potential line of inquiry could concern Kushner's failure to disclose some of his contacts with Russian government officials when he was filling out his application for a security clearance. The omissions were described as an "administrative error" by Gorelick, who said additional information about his meetings were provided to the FBI the day after he submitted his incomplete clearance application.

When applying for a security clearance, applicants are asked to disclose details about their interactions with foreigners, including the names of all the foreign government officials the applicant has had contact with over the past seven years. In some cases, people can lose their security clearances and jobs for not properly disclosing foreign contacts. Some Democrats have called on Kushner to be stripped of his security clearance and have asked the FBI to review whether Kushner complied with the law.

Todd Hinnen, the former acting head of the Justice Department's national security division, said it would be easy to read too much into investigators' interest in Kushner.

"Given his position and his contacts, interviewing him would be an important step in any thorough investigation," Hinnen said.