Updates from the Republican National Convention. In other words, what happens when thousands of sleep deprived journalists spend a week together.

Saturday, July 23rd - 10:45 a.m. - FINAL THOUGHTS: As we pack up and head to Philadelphia for the Democratic National Convention there's one thought that sticks with us - Cleveland is a pretty nice city.

In the end, that's the lasting impression Cleveland hoped for as it welcomed 50,000 visitors to the city - 15,000 of those members of the media.

Businesses in Cleveland may have missed out on a financial windfall this week. Many of the convention goers didn't make it out to the restaurants, shops and casino. Over the week, we heard stories about restaurants closing up early, or workers standing around waiting for the crowds that never appeared. But the lasting impression will likely have a larger impact.

I know this trip has changed my impression of the city. Will I come back and visit? I'm not sure, but I no longer believe Cleveland is like the city portrayed in this viral video:

Yes, it's muggy, but it was still very cool.

Friday, July 22nd - 1:11 a.m. - The Republican delegates are having a good time tonight! Maybe a little too good.

Thursday, July 21st - 10:41 p.m. - Yep, watching the Trump speech on a TV just like the rest of America. There are 15,000 members of the media here and not everyone can fit inside the Q Arena. Besides, there's trail mix back here! 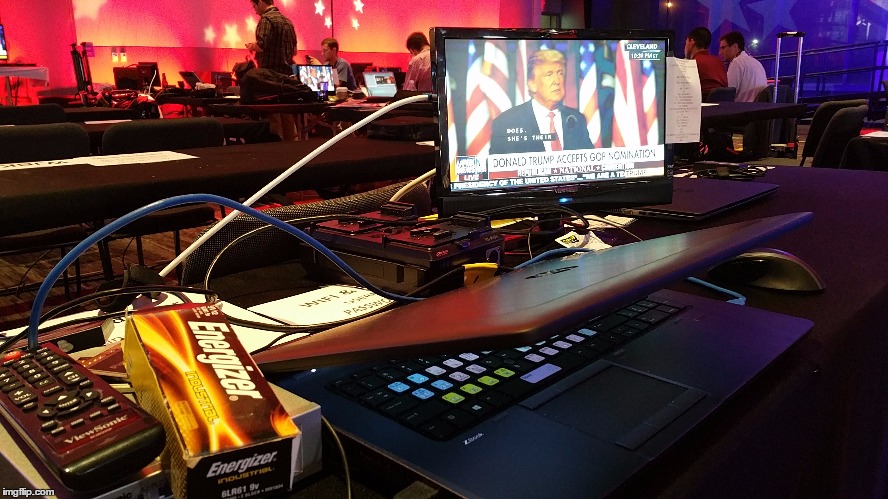 Thursday, July 21st - 3:10 p.m. - So much for the protests. The crowd tonight was chanting "love trumps hate" and offering free hugs. I guess I can take that gas mask off now. 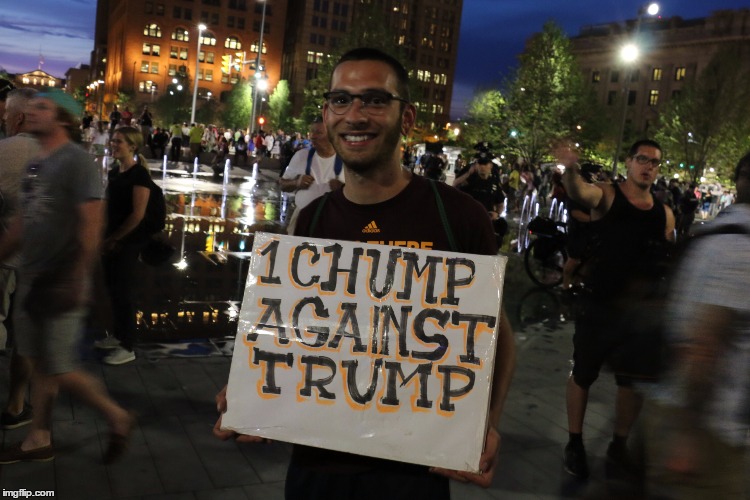 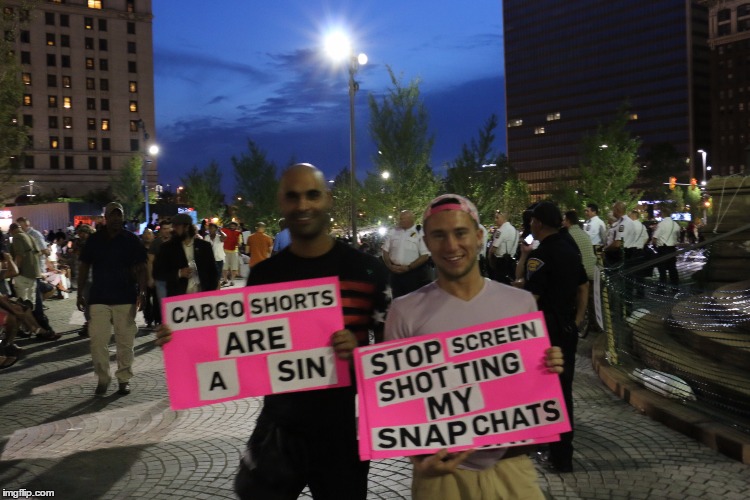 Thursday, July 21st - 3:10 p.m. - We just got some video (see below) of a man being arrested inside the Quicken Loans Arena. The video shows him yelling, "black people are not allowed in the Republican Party".

There are unconfirmed reports he was inside a media suite on the 4th floor, yelling down to the stage while Trump was doing his walk through this morning.

Everyone who enters the arena must be credentialed, but you do not need a special credential to enter the media suites. You're also supposed to be wearing your credential at all times. In the video the man is not wearing any credentials, but we don't know if they were removed by authorities.

Thursday, July 21st - 11:02 a.m. - I just took a closer look at the speakers list for the Democratic National Convention:

And we thought security was tight here...

Thursday, July 21st - 9:52 a.m. - So tonight's the big night! We've already been told to be on the floor early because they may lock it down and stop allowing people in. The floor is packed when no one is speaking. Imagine what it will be like when Trump takes to the podium! Should be an exciting night.

Wednesday, July 20th - 5:09 p.m. - There's a demonstration area in downtown Cleveland a few blocks away from the convention site. It's open to the public and great for people watching. While I was there, I met Dr. Awesome, who claims to be the current Guinness World Record holder for biggest free floating soap bubble. A few yards away from the demonstrators and mounted police, he was making bubbles next to a small sign that reads "make bubbles, not bombs". 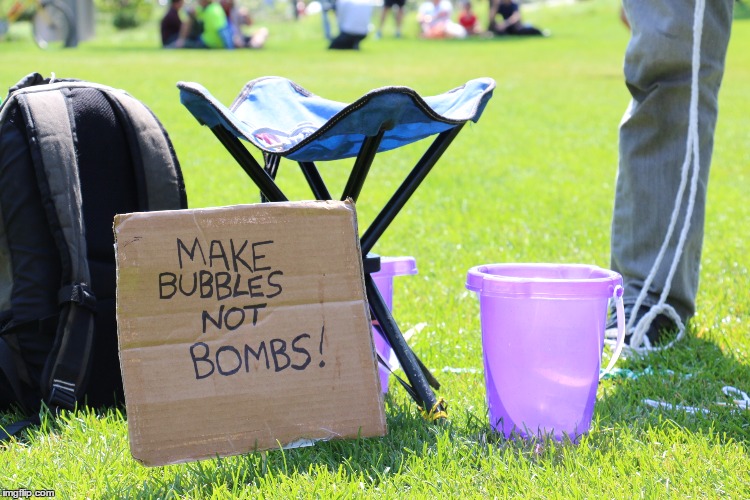 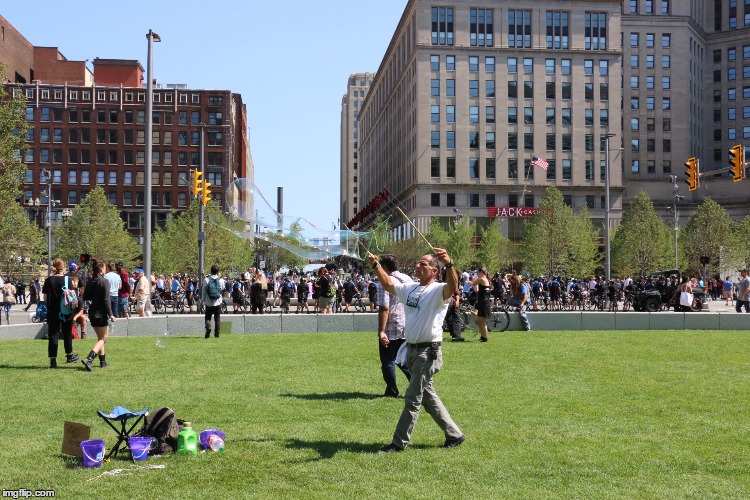 Wednesday, July 20th - 4:31 p.m. - There's a flag burning and some arrests happening right now outside the Q. It was a scheduled event. Yes, you read right -- A scheduled flag burning.

Wednesday, July 20th - 12:03 p.m. - Day three of the RNC! So far our biggest challenge is the transportation. A majority of the media is out in the suburbs. Some are as far away as Akron, Ohio. We take shuttles in, but the shuttles only run every two hours. And when you're going to bed at 3:00 a.m. that 10:00 a.m. shuttle seems a little early.

So we've been leaving around noon, getting into the city around 12:30 p.m. - Then we need to go through security which takes another 20 minutes. That's just to get into the media center. To get to the convention site, we have to take another shuttle and that takes about 10 minutes. So here we are, day three, and ready to shuttle all over Cleveland! 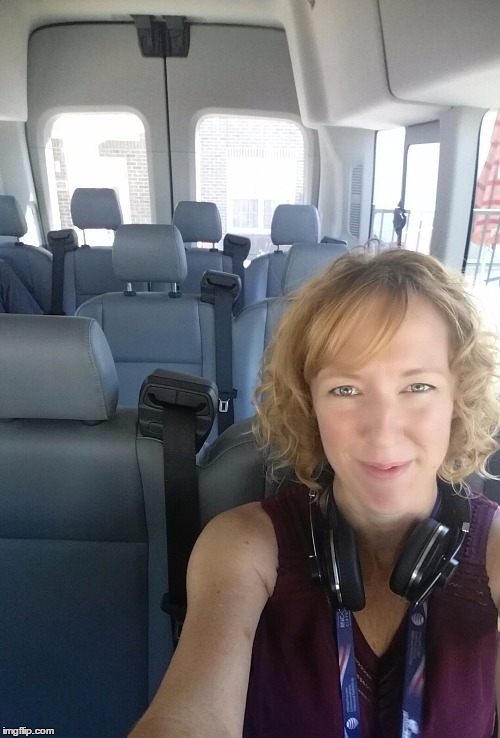 Wednesday, July 20th - 1:45 a.m. - Had a hard time finding food in downtown tonight after our live shot was over. Granted our live shots are 1:00 a.m. Cleveland time. About a block away from the arena, a guy at a pizza shop told us they planned on being open until 4:00 a.m. but decided to close early because it was so slow.

Earlier tonight, I was talking to a secret service agent who said he was surprised by how quiet it was around town. Then he said, "Why would you hit a hard target like this when you can just hit a soft target."

Tuesday, July 19th - 6:26 p.m. - I just got back from the convention floor and wow, what a pep rally! It was my first time being on the floor while the convention was in session. People were cheering, booing, dancing, singing, chanting, and waving signs. It was contagious.

I'm working on a video of my walk through the floor. I'll post that soon. (UPDATE: Here's the link)

Oh, my feet are also killing me. They don't allow you to wear sneakers on the floor while the convention is in session and my little ballet flats didn't cut it. Earlier today Jezebel reported the Trump folks were cracking down on women wearing skimpy or sloppy outfits, but I haven't seen any of that. And I've been wearing jeans every day.

Tuesday, July 19th - 2:20 p.m. - This afternoon I stopped by the Facebook media headquarters outside the Quicken Loans Arena to talk to the folks running the place. Imagine a trendy patio bar with white globe string lights and pretty people.

Despite the party atmosphere, it was all business with Facebook operating live shots on Facebook Live from their upstairs deck.

During my 30 minutes there, a congresswoman from Tennessee stopped by to go live and Newt Gingrich did an interview with reporters -- Also probably on Facebook live.

If you haven't figured it out yet... Facebook really likes being live. (UPDATE: Full Story Here) 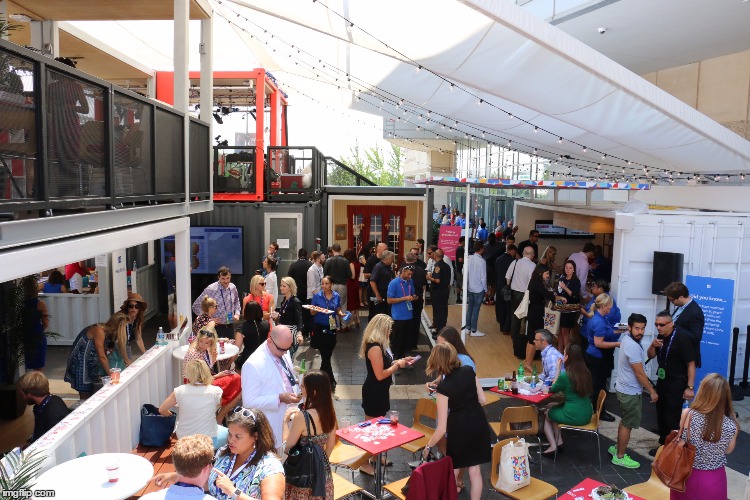 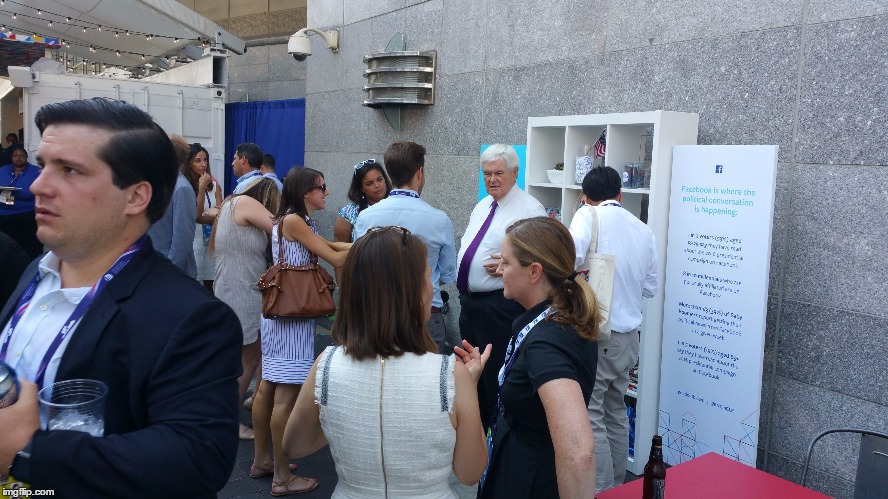 Tuesday, July 19th - 9:49 a.m. - Last night I spent a lot of time behind the scenes at the Quicken Loans Arena and was struck by how similar the event was to a NBA game. Sure the convention is being held at the home of the Cavs, so it's not hard to make the connection. But on television, you don't see the souvenir stands and the long lines for pretzels and hot dogs.

Even the crowd was like being at a game. There were two teams - The delegates and the media. I tried to avoid bumping into delegates, while giving head nods to my fellow journalists.

One thing they all had in common - They were all rooting for the same team. 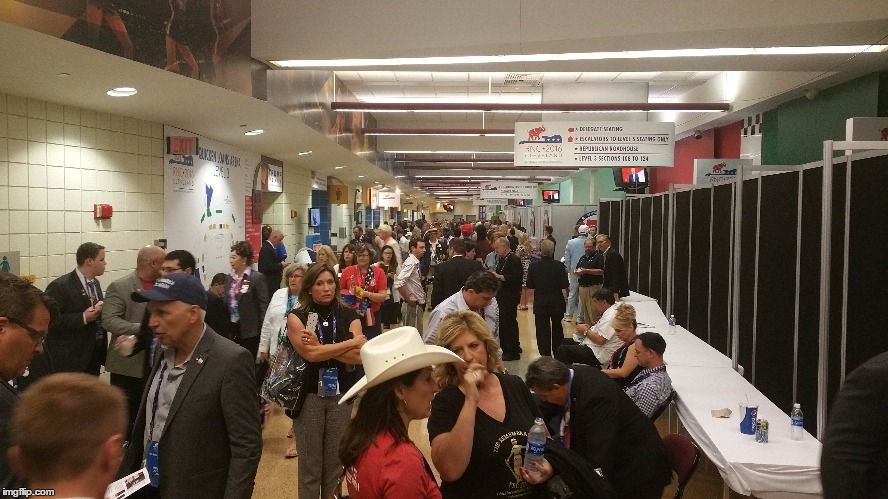 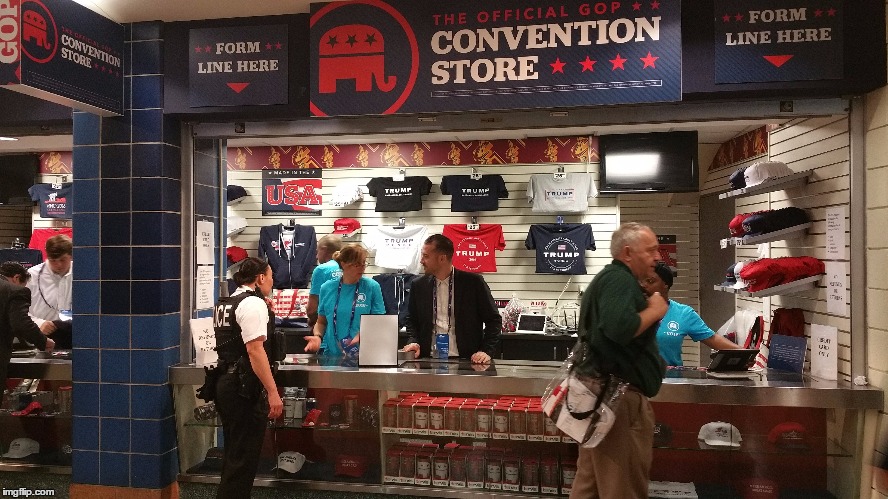 Monday, July 18th - 10:12 p.m. - What it's really like to be a journalist covering a national convention - No charging outlet is off limits when you need to make deadline: 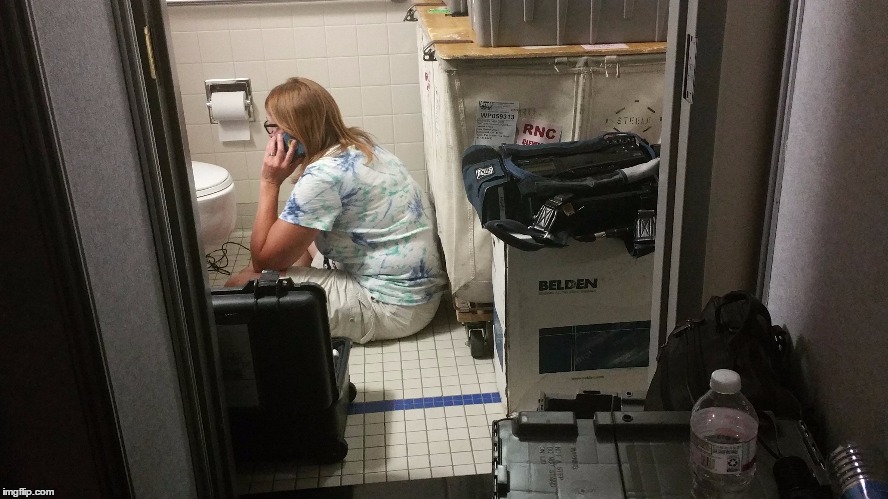 This woman was in the Fox suite this evening. I'm assuming her reporter/anchor was going live and she had no other way to call the booth/newsroom. Don't worry girl, I've been there too.

Monday, July 18th - 5:10 p.m. - Annnnd I just realized that the secret service agent who checked my camera earlier took this picture of me. I know you gotta make sure it's a camera and not a bomb, but do you really need to take a picture of me being a sweaty mess?

Click here for my full story on the security and giant fences in downtown Cleveland. 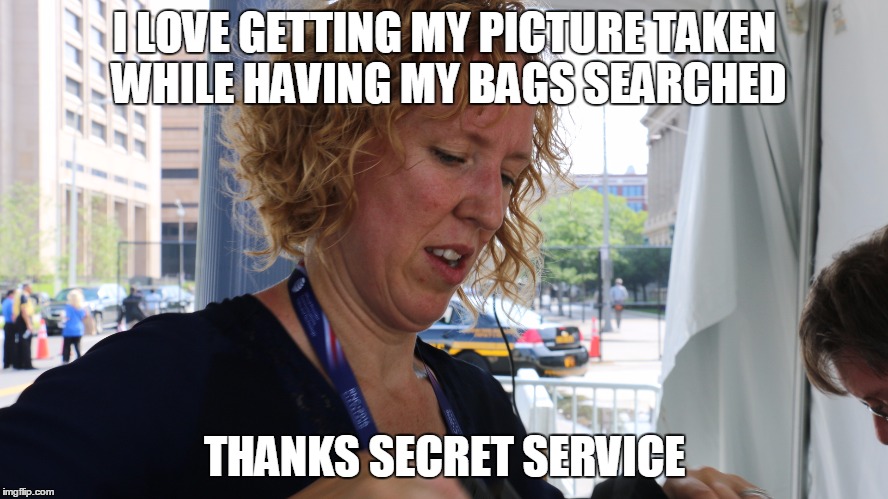 Monday, July 18th - 4:56 p.m. - Well that was easy. A reporter from another station stopped by our work desk to show us picture of some vulgar anti-Hillary pins being sold outside the convention. We went to check it out and sure enough, the first stand we went to had them.

You can read the full story here. 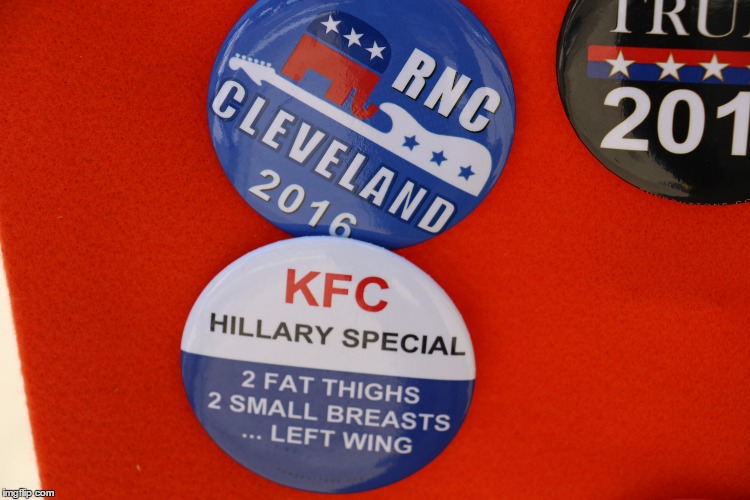 Monday, July 18th - 2:45 p.m. - I just walked to the convention site to get a feel for what's going on outside the giant black fences (see picture below). It took about 30 minutes and during that time I saw about 200 police officers and two protesters. I don't even know if I'd call them protesters - There were a couple of people with bull horns talking to small crowds.

And I don't want to imply that there was a huge wall of officers with riot gear. It was more like small groups of officers hanging out. I saw officers from Indiana, South Carolina, and even California.

The mood is good. Vendors are selling t-shirts, buttons and red Make America Great Again hats. There are food trucks in the park. The sun is shining. Music is playing. So far, a pretty calm start to the convention. 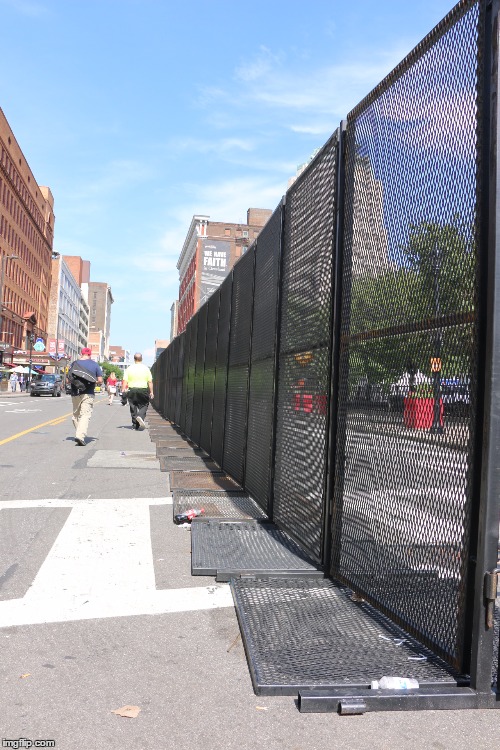 Monday, July 18th - 12:33 p.m. - I've been working for hours now, but have yet to leave the media center. Probably because I was doing this Snapchat story behind the scenes in the media work rooms - Enjoy!

Monday, July 18th - 12:35 a.m. - We just finished our walk through of the convention site and the media center, and I'm sooo happy I brought comfortable shoes. A large section of downtown is surrounded by a giant black fence that stands about 12 feet high. I wasn't trying to be "artsy" when I took this picture, I just couldn't see over the giant fence. 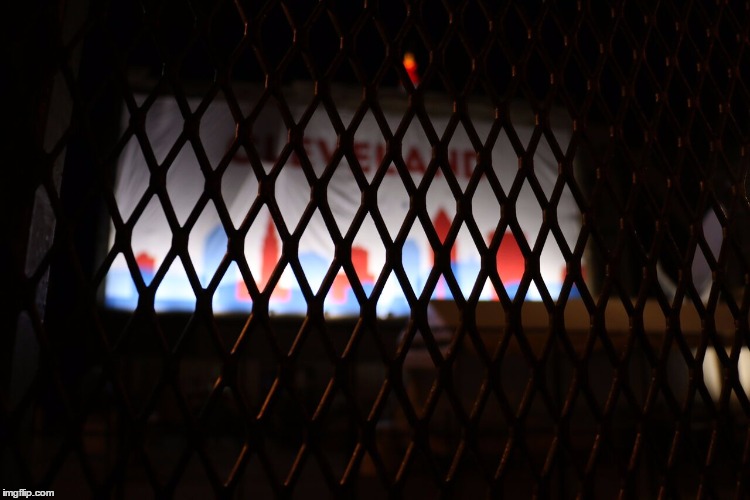 To get behind that giant black fence, you need to have your bags searched by Homeland Security agents. To get out, you need to walk. We tried to grab an Uber and got this message on the app. Yes, come get your Uber - It's only a half mile away. Again, soooo happy I brought comfortable shoes. 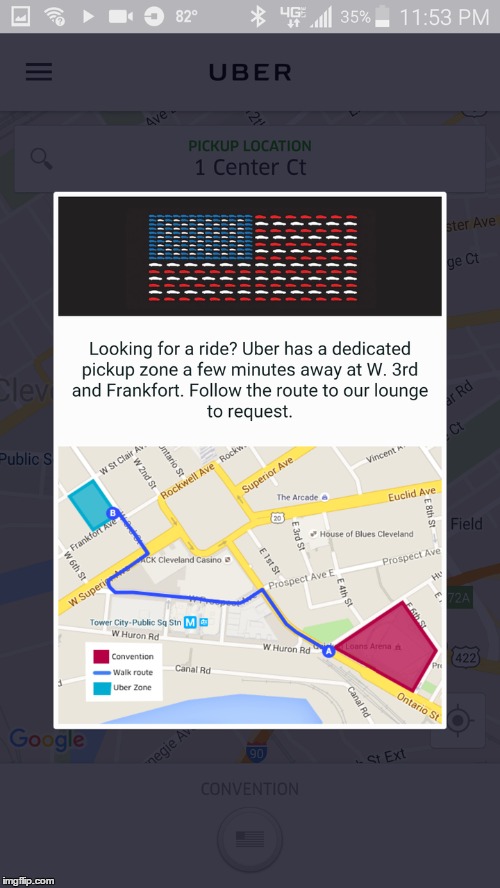 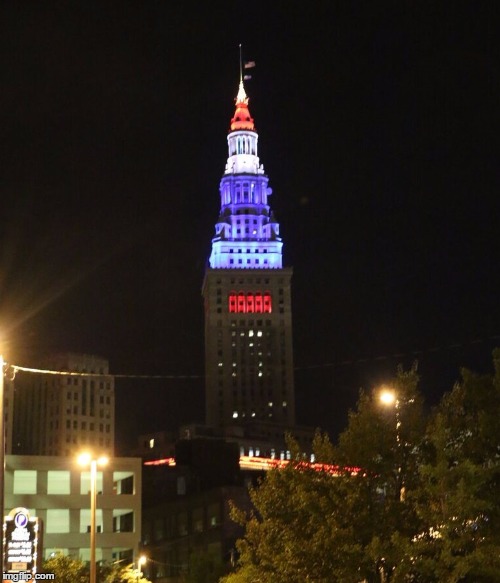 Sunday, July 17th - 6:45 a.m. - So here we go! Cleveland bound for the Republican National Convention. My bag is packed and I'm ready to go. Oh wait, I need to pack the GoPro camera. And the digital camera. And the 360 camera. And the chargers for all three of my cell phones.

Covering the conventions will be great experience they said.

Over the next week, I'll be Snapchatting, YouTubing, Facebook Live'ing, Tweeting, streaming, posting, sharing, liking, and hashtagging. Oh and I'll also writing stories for KTVU.com. Need to find me? I'll be that woman by the power outlet.

You'll learn a lot they said.

I'll be carry around so much stuff, they bought me a special backpack. My photographer, Chris Paxton, actually giggled when he saw me wearing it. Here's a picture, courtesy my 7-year-old.

I think it looks pretty good, despite what my photographer thinks.

All kidding aside, I hope to bring you video, pictures and stories that you won't see on TV. Feel free to tweet me if you have any requests or questions. And if you need a refresher course on what's about to happen, check out our quick guide to the conventions.

You'll have fun they said.

Yes, I think I will.

About the author: Amber Eikel is currently the Assistant News Director at KTVU, the Fox affiliate in San Francisco. She has worked in Seattle, Milwaukee and Las Vegas. You can follow her on Facebook, Twitter and on the KTVU Snapchat account.