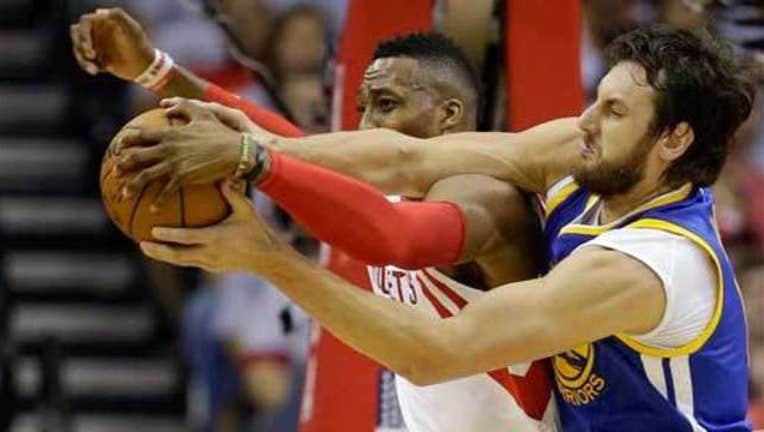 OAKLAND, Calif. (AP) — Houston Rockets center Dwight Howard will not be suspended for Game 5 of the Western Conference finals against the Golden State Warriors after the NBA decided to uphold his flagrant 1 foul.

NBA President of Basketball Operations Rod Thorn said in a statement Tuesday night that Howard was trying to free himself from Andrew Bogut when Howard "recklessly hit him in the face with an open hand." Thorn said the contact was deemed unnecessary by game officials, who were aided by replay review, and the league doesn't "see a reason to modify that call."

Howard received a flagrant 1 foul early in the third quarter after throwing his left elbow at Bogut's head — connecting with the back of his hand — after the Warriors center made contact with him. Howard could've been suspended for Wednesday night's game by accumulation of flagrant foul points if the NBA upgraded the call to a flagrant 2.

Howard said after the game he was reacting to Bogut's contact and wasn't trying to hurt him. Told Howard would be suspended for Game 5 if the NBA upgraded the call to a flagrant 2, Bogut said he doubted that would happen then.

The decision comes with the Warriors leading the series 3-1 and after Atlanta's Al Horford and Cleveland's J.R. Smith recently received stricter penalties for contact above the shoulders.

Horford was assessed a flagrant 2 foul and ejected from Game 3 of the Eastern Conference finals on Sunday night for striking Cavaliers guard Matthew Dellavedova above his shoulders late in the first half. The two got tangled on the floor while scrambling for a loose ball, and as Dellavedova was rolling up on his right knee, Horford brought his right arm down hard and struck the side of the scrappy Australian's head.

A few weeks earlier, the NBA suspended Smith the first two games of the East semifinals against Chicago without pay after he swung backward and smacked Boston's Jae Crowder in the face in the final game of the first round. Smith was ejected and Crowder sprained a knee ligament.

Stu Jackson, who ruled on such matters when he was previously the NBA executive vice president of basketball operations, wrote on Twitter that he was "baffled" by the league's decision not to upgrade Howard's flagrant.

Before the league announced the ruling, Rockets coach Kevin McHale argued that Howard was retaliating to the contact made by Bogut and the flagrant foul should not be upgraded.

"I guess the one thing we'll learn is we should be the first one to grab," McHale quipped.

Warriors coach Steve Kerr declined to say whether he thought Howard's flagrant should be upgraded, but he thought the contact was clearly above the shoulders.

"He elbowed him in the head, so I don't really know what the rule is," Kerr said. "I'm not sure anyone really knows what the rule is. Seriously, it just seems like every case is a little different. There doesn't seem to be a definitive answer, and there is a lot of gray area in all these plays, so I understand that."