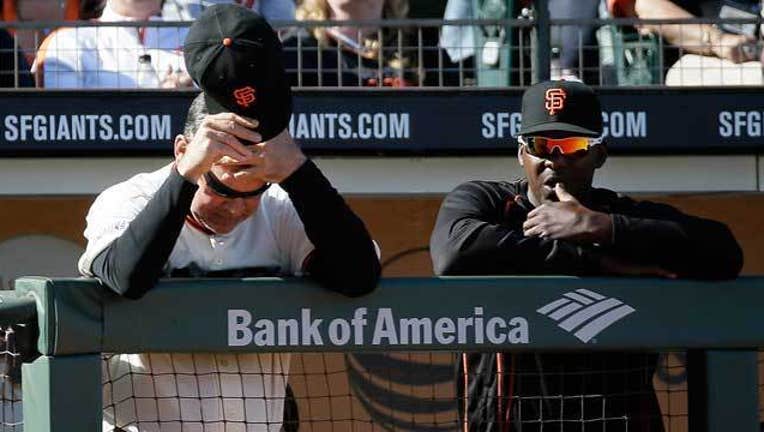 Troy Tulowitzki, back in the lineup after a day off, had the only RBI of the game with a run-scoring single in the fourth against Heston (1-1). San Francisco raised its third World Series championship flag in five years before the game.

Facing the Giants for the first time, Butler (1-0) tossed 5 1-3 innings of five-hit ball, walking six with one strikeout. Colorado's 2012 first-round pick worked out of bases-loaded jams in the first and second innings.

The Giants were shut out in a home opener for only the third time in the San Francisco era and first since home run king Barry Bonds' final season of 2007.

Fourth Rockies reliever Rafael Betancourt struck out two in a perfect ninth for his first save since Aug. 20, 2013. Colorado matched its best road start at 4-0, also done in 2006.

Just the second rookie in San Francisco history to start a home opener, Heston allowed one earned run, struck out five and walked two over seven strong innings. His parents were in the stands among the 42,019 fans at sold-out AT&T Park for the occasion.

In the seventh, Giants shortstop Brandon Crawford saved a run when he stopped a hard grounder for a single by DJ LeMahieu. Nick Hundley doubled with two outs but had to hold up at third.

But Hundley wound up scoring anyway moments later on a pitch that got away from Heston. Hundley's slide was short of the plate but he reached in with his left hand and the ball came loose from Heston's glove. It ended up under Hundley's leg in a crazy sequence.

Giants manager Bruce Bochy challenged but the call was upheld in 1 minute, 22 seconds. Heston received an error on the play.

Heston allowed Charlie Blackmon's sharp single up the middle on the second pitch of the game but induced a double play by Carlos Gonzalez and struck out Tulowitzki to escape unscathed.

World Series MVP Madison Bumgarner — who will be honored again Tuesday — hopped on a horse to carry the championship flag through the outfield warning track. He handed off to Matt Cain and members of all three World Series champion teams took it the rest of the way: Tim Lincecum, Jeremy Affeldt, Sergio Romo, Santiago Casilla and Javier Lopez. Catcher Buster Posey was in the bullpen warming Heston.

Four daughters of Lon Simmons threw out the ceremonial first pitches following a videoboard tribute for the Hall of Fame broadcaster, who died April 5 at age 91.

Rockies: Closer LaTroy Hawkins is getting a "breather," as manager Walt Weiss put it in announcing the RHP will move out of the ninth-inning role for now after a blown save Sunday.

Giants: RHP Erik Cordier was scheduled to throw to hitters as he works back from a strained right forearm. ... RF Hunter Pence (broken left forearm) was to be reevaluated by the team's medical staff, while 3B Casey McGehee (left knee strain) was considered day to day.

Rockies: RHP Christian Bergman (1-0) makes his first start of the season after earning a victory in the Rockies' home opener Friday against the Cubs.

Giants: RHP Tim Hudson (0-0) makes his home debut looking to improve to 6-2 lifetime against the Rockies. He didn't have a decision against them in four 2014 starts.