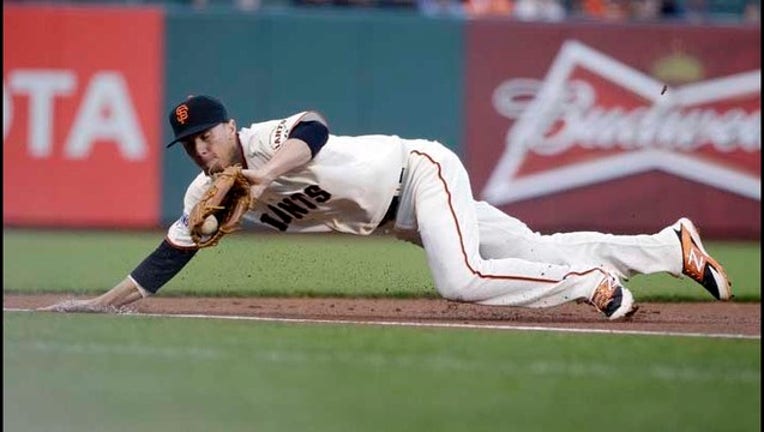 SAN FRANCISCO (AP)  — The catch of his career one night, a three-run homer the next for Nolan Arenado, who put Colorado on the board in the first inning and saw it hold up as the first-place Rockies completed a sweep of the San Francisco Giants with a 4-2 win Wednesday night.

Charlie Blackmon added a sacrifice fly for the Rockies, who at 7-2 have matched the best nine-game start in franchise history by joining the 1995, '97 and 2011 clubs.

Matt Duffy hit his first career home run with a solo drive in the eighth off Boone Logan for the Giants. Angel Pagan added an RBI single in the first.

The Rockies won at AT&T Park for the ninth time in 13 games, including a three-game sweep from June 13-15 last year.

Matzek allowed five hits and one run in six innings, struck out two and walked one while earning just his third road victory (3-7) in 12 starts. Just promoted closer Adam Ottavino finished for the second straight night to get his third career save. He struck out two more in a perfect ninth after striking out the side in order in the ninth Tuesday.

Lincecum gave up Arenado's two-out home run in the first to dig himself an early hole the Giants couldn't get out of with their struggling offense.

A night earlier, Arenado made a spectacular falling catch over the tarp and rail in foul territory along the left-field line on Gregor Blanco's popup. He immediately threw from his knees while still on the tarp and nearly got Angel Pagan at third for a double play. Arenado still had some lingering soreness Wednesday.

Matzek hit Giants leadoff hitter Nori Aoki in the back with his fourth pitch of the game. He then stole his third base before advancing to third on backup catcher Michael McKenry, giving Nick Hundley a breather.

Aoki went 0 for 3 and had his career-best 17-game hitting streak snapped that dated to last season.