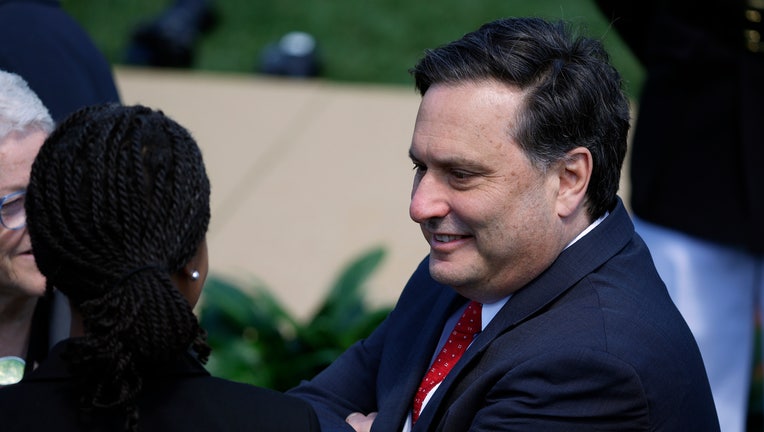 White House Chief of Staff Ron Klain joins other guests for a celebrations of Judge Ketanji Brown Jackson's confirmation to the Supreme Court on the South Lawn of the White House on April 08, 2022 in Washington, DC. J(Photo by Chip Somodevilla/Getty

WASHINGTON - White House chief of staff Ron Klain, who has spent more than two years as President Joe Biden's top aide, is preparing to leave his job in the coming weeks, according to a person familiar with Klain's plans.

Klain's expected departure comes not long after the White House and Democrats had a better-than-expected showing in the November elections, buoyed by a series of major legislative accomplishments, including a bipartisan infrastructure bill and a sweeping climate, health care and tax package that all Republicans rejected.

His tenure as chief of staff is the longest for a Democratic president in modern times.

The person familiar with Klain's plans was not authorized to discuss the matter publicly and spoke on condition of anonymity to confirm the development, which was first reported by the New York Times.

READ MORE: By the numbers: A look at President Biden's first 2 years in office

The White House did not return calls or emails seeking comment on Klain’s expected exit.

Spending the weekend in Rehoboth Beach, Delaware, Biden did not respond to shouted questions about when his chief of staff is expected to depart.

Klain sent an email to White House staff on Friday, which was the second anniversary of Biden’s inauguration. "Although much work remains ahead, as we look back on these two years, I am awestruck at what this team has done and how you have done it," he wrote in the email, obtained by The Associated Press, and noted that he bought cake to mark the occasion. He added: "These cakes are my small way of adding my personal thanks to those of the President, the Vice President and the country for your service and outstanding achievements."

Now that Republicans have regained a majority in the House, the White House is preparing to shift to a more defensive posture. GOP lawmakers are planning multiple investigations into the Biden administration, examining everything from the chaotic U.S. withdrawal from Afghanistan to U.S. border policy. Republicans are also pledging to investigate the president's son, Hunter Biden.

Klain's departure also comes as the White House struggles to contain the fallout after classified documents dating from Biden's time as vice president were discovered at his home in Wilmington, Delaware, and at his former institute in Washington. Attorney General Merrick Garland has appointed a special counsel to investigate the matter.  Biden's lawyer said Saturday that the FBI searched the Wilmington home on Friday, locating six additional documents containing classified markings and taking possession of some of his notes.

Dunn has publicly ruled out interest in the chief of staff job but would be the first woman in the post. She played a leading role in shaping Biden’s political and communications strategy, including the "ultra-MAGA" framing of Republicans that helped Democrats exceed expectations during the 2022 midterms.

Zients has returned to the White House since running the COVID-19 response team in a low-profile role to ensure the administration is appropriately staffed for the remainder of Biden’s first term. Richetti, a former lobbyist, followed after Klain and senior adviser Bruce Reed as Biden’s final vice presidential chief of staff.

Walsh, Boston's mayor before joining the Cabinet, earned praise from Biden as recently as Friday for his job performance. Vilsack, a former Iowa governor, is in his second stint as agriculture secretary after serving in the role for the entirety of the Obama administration. He volunteered for Biden during Biden's ill-fated 1988 presidential bid in Iowa.

Klain, a longtime Democratic political operative, has overseen a West Wing that has been largely free of the high-stakes drama that permeated the upper echelons of the Trump administration. Klain has been an outspoken proponent of Biden’s agenda via Twitter, where he frequently engages with reporters to defend the president’s record.

His social-media use has run Klain into trouble at times. In October, he was found to have violated the Hatch Act, which bars government officials from political activity when acting in their official capacity, when he retweeted a message from a political group last spring. At the time, the White House said Klain "got it wrong this time" and he promised to be more careful with his Twitter account.

The Indianapolis native has served under Biden for decades, including as chief counsel of the Senate Judiciary Committee when Biden was its chairman. Klain also worked on judicial picks in the Clinton White House, helping with the nomination of Ruth Bader Ginsberg for the Supreme Court.

"With all due respect to my predecessors, I’m sure this is a higher priority for me." Klain said in an Associated Press interview last month in which he discussed the importance placed by Biden of seating judges on the federal bench. "The fact that (the president) makes it such a priority, makes it a big priority for me."

He was also tapped during the Obama administration to lead its response to the Ebola crisis — a background that came in handy as the Biden White House took on the COVID-19 pandemic in the early months of his presidency.

The father of three is married to Monica Medina, an assistant secretary of state.