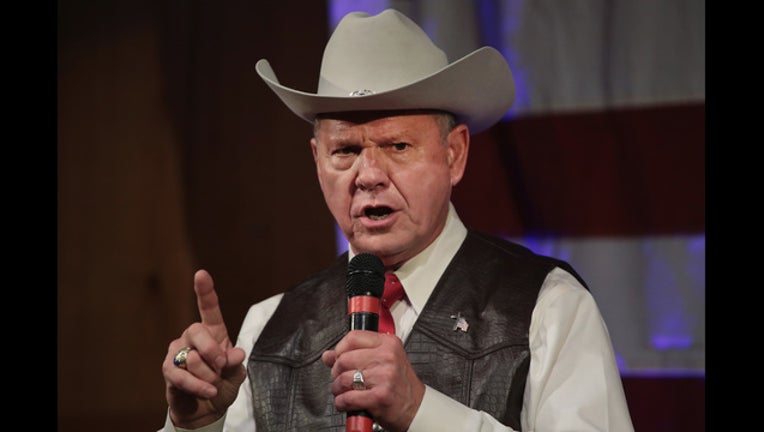 Republican candidate for the U.S. Senate in Alabama, Roy Moore, speaks at a campaign rally on September 25, 2017 in Fairhope, Alabama. (Photo by Scott Olson/Getty Images)

MONTGOMERY, Ala. (AP) - Former U.S. Senate candidate Roy Moore has issued a plea for money to pay legal bills, saying his "resources have been depleted."

In a Thursday post on his campaign's Facebook page, Moore asked for contributions to his legal defense fund. Moore has sent regular fundraising emails for the fund since losing the 2017 election to Sen. Doug Jones, a Democrat. However, the link to the donation site indicated that Moore had raised just $32,000 of a $250,000 goal.

"My resources have been depleted and I have struggled to make ends meet, but I have not lost my faith in our God, who is our true source of strength and will never leave or forsake us," Moore wrote.

Moore lost the election amid accusations that he pursued romantic and sexual relationships with teens as a man in his 30s. Moore denied accusations of sexual misconduct, and said he never dated "underage" girls.

Leigh Corfman, who accused Moore of sexually touching her when she was 14 and he was in his 30s, has an ongoing civil lawsuit against Moore.  She claims Moore and his campaign defamed her as he denied the allegations.

In the fundraising post, Moore disparaged the "liberal media" and said "gays, lesbians, and transgenders have joined forces with those who believe in abortion, sodomy, and destruction of all that we hold dear."

Moore is former chief justice of the Alabama Supreme Court. A state board in December approved a $135,000 annual retirement for him because of his years on the state bench.