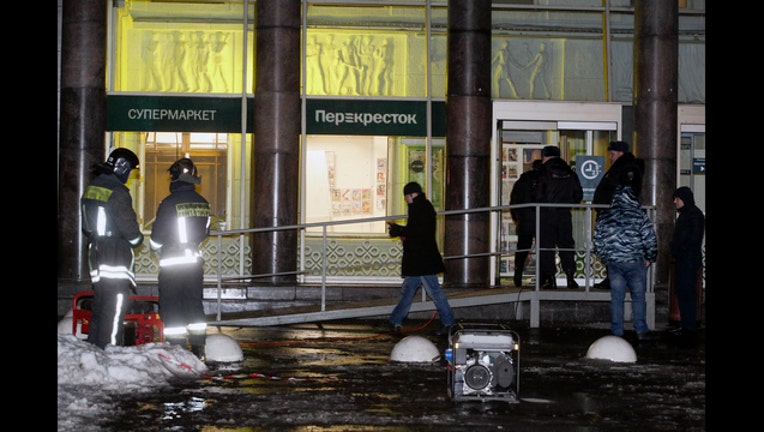 Police stand at the entrance of a supermarket, after an explosion in St.Petersburg, Russia, Wednesday, Dec. 27, 2017. Russian officials say at least 10 people have been injured by an explosion at a supermarket. (AP Photo/Dmitri Lovetsky)

ST. PETERSBURG, Russia (AP) -- At least 10 people were injured Wednesday by an explosion at a supermarket in St. Petersburg, Russia's second-largest city and the site of a deadly subway bombing this year.

The Investigative Committee, the nation's top investigative agency, said a device containing 200 grams (7 ounces) of explosives went off at a storage area for customers' bags. It said the device was rigged with shrapnel to cause more damage.

No one has claimed responsibility for the explosion at a branch of the Perekrestok supermarket chain in the city's northwest Kalininsky district.

Alexander Klaus, the chief of the local branch of the Investigative Committee, said 10 people were hospitalized with injuries.

Andrey Kibitov, a spokesman for St. Petersburg's governor, tweeted that the injured were in satisfactory condition and one had been discharged from the hospital.

A criminal investigation was launched.

While officials stopped short of branding the explosion as a terror attack, the National Anti-Terrorism Committee that oversees anti-terror efforts in Russia said it was coordinating the search for suspects.

Viktoria Gordeyeva, a St. Petersburg resident who walked past the supermarket shortly after the explosion, said people were afraid to enter other stores in the area.

"There was no panic, but people were reluctant to enter a nearby drug store and a grocery store," Gordeyeva said.

Another local resident, Marina Bulanova, a doctor, heard the explosion and rushed to the market to help treat anyone who might be hurt. She said ambulance crews already had taken those injured to city hospitals by the time she got there.

The Federal Security Service, or FSB, said seven suspects linked to the Islamic State group were arrested in connection to the alleged plot. The Kremlin said the arrested suspects had planned to bomb St. Petersburg's Kazan Cathedral and other crowded sites.

In April, a suicide bombing in the St. Petersburg's subway left 16 people dead and wounded more than 50. Russian authorities identified the bomber who blew himself up on a subway line as Akbardzhon Dzhalilov, a 22-year old Kyrgyz-born Russian national.

Vladimir Isachenkov in Moscow contributed to this report.