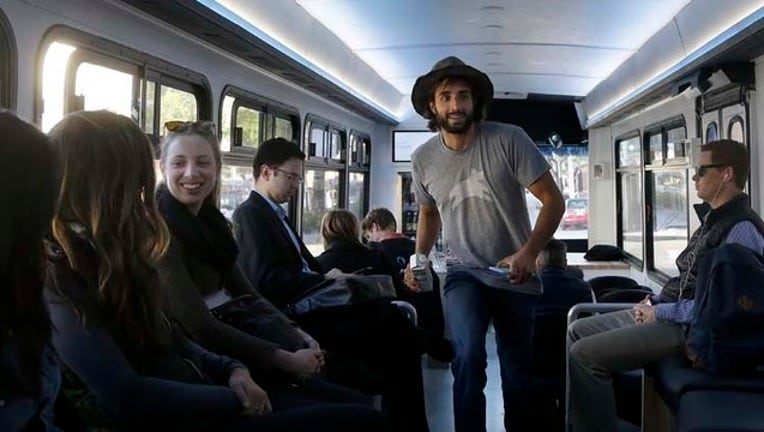 SAN FRANCISCO (AP) — The compact city that inspired ride-hailing companies Uber and Lyft is offering a new way to get to work: fancy $6 big-bus rides with spacious seating, free Wi-Fi and attendants who deliver snacks.

A company called Leap launched the service in March with morning and evening commutes that follow public bus routes between the tony Marina district and the heart of downtown San Francisco. Leap joins a private shuttle service called Chariot, which operates 15-seat passenger vans over multiple routes within the city at a cost of $3 to $5 a ride.

Fans say the app-enabled buses and shuttles complement an aging municipal transit system that is unreliable and overburdened at peak times. Critics say the private rides are just another sign of the growing gap between wealthy tech workers and everyone else in a city where starter homes can easily go for $1 million.

A single-fare bus ticket on the citywide Municipal Railway is $2.25, amenities definitely not included.

San Francisco, with its picture-perfect views and steep hills, has a wealth of public transit options, including buses, light rail, historic trolleys and, of course, its cable cars.

But with a boom in technology jobs and development, thousands of workers — commuters and residents alike — have added to congestion on the often narrow streets. New ways of getting people around the city have created tensions.

Taxi drivers, for example, weren't happy when Uber and Lyft launched in 2010 and in 2012, allowing passengers to connect with drivers via smartphone. Protesters blocked Silicon Valley commuter buses in 2013 and 2014, complaining that companies such as Google were hogging public bus stops to give their well-paid workers a hassle-free ride to work.

The move into group transit — especially buses that do not carry many riders — worries public bus advocates such as Thea Selby, chairwoman of the San Francisco Transit Riders.

"We are very concerned that people will mentally disinvest in Muni when they take Leap, and that will create a two-tier transportation system," she said.

On a recent weekday evening, a dozen passengers spread out on a bus with seats for 27. Stops are limited and the ride home takes about 25 minutes rather than 45 minutes on public transit. Rides are $5 each if bought in bulk.

Julia Vitaro, 27, said she was tired of packed city buses passing her by in the morning. She doesn't make that much money at a startup downtown, she said, but chooses to spend it on Leap.

"I don't want to start my day off with Muni," Vitaro said.

Leap CEO Kyle Kirchhoff started the company with a $2.5 million investment from venture capitalists. The company's five buses are refurbished from full-sized transit buses and are not wheelchair accessible, which critics say is another problem with the service.

In San Francisco, the other option is Chariot, which has raised $3 million from investors, said founder and CEO Ali Vahabzadeh. The year-old company has 35 passenger vans circulating five routes in the morning and evening, between jobs in South of Market and downtown, and homes in the Marina, Haight-Ashbury and Cow Hollow.

Two rides cost $10, with the price declining if bought in bulk. A monthly pass costs $93.

The services can't use public bus stops; drivers need to collect and drop off passengers at shuttle or loading zones.

Leap declined to provide ridership or comment on profitability. Chariot reported two routes are making money and that the company gives close to 5,000 rides a week. Both companies are dwarfed by Muni, which carries 700,000 passengers each weekday, and Bay Area Rapid Transit, which carries 420,000.

That entrepreneurs are competing for transit passengers doesn't surprise Gabe Klein, a private shuttle consultant who once headed operations at car-sharing company Zipcar. Klein said smartphones have made it easier to experiment with clunky bus lines that haven't changed in decades.

He doesn't know if any one model will survive in San Francisco or elsewhere, "but I can tell you for sure the bus industry is going to change dramatically in the next decade."