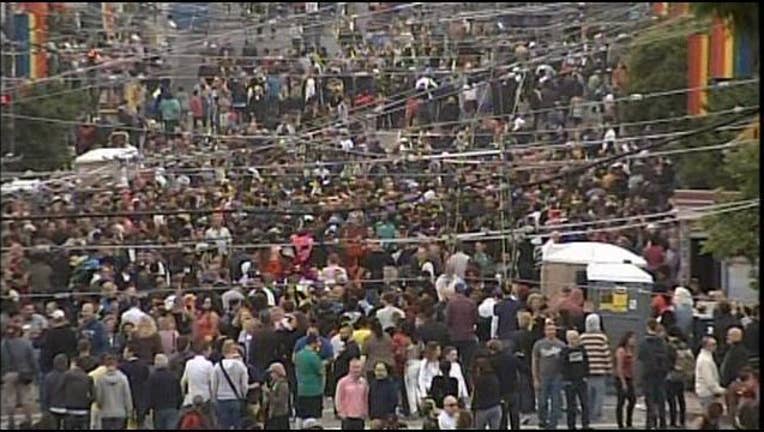 SAN FRANCISCO (KTVU) - The Pink Saturday party will go on this year, after the San Francisco LGBT Community Center and city officials on Thursday said they would step up to produce the event.

The event dates back about 25 years, and in recent years has attracted hundreds of thousands of people to the city's Castro District for a street party ahead of the Sunday Pride parade.

"The point is a joyous occasion for all parts of our community to come together and have a good time and celebrate all of the history that our community has gone through," said Emily Palmer, manager of Hot Cookie on Castro Street.

But a series of recent violent attacks against attendees seemed to jeopardize the event's future. Last month, the Sisters of Perpetual Indulgence- the event producers - said they'd no longer manage the party after a member and her husband were attacked last year.

"They've done an incredible job for the last 25 years, and they leave some big shoes to fill," San Francisco LGBT Community Center Executive Director Rebecca Rolfe told KTVU Thursday. With about three and a half months until Pride weekend, the Center is now set to produce the event.

"It is a short turnaround time," said Rolfe. "We want to make sure that people have activities and things that they can engage with that are fun and also really are about LGBT community and culture. We've got an LGBT youth program here and we see this also as a really important event for youth because there are so many places that they can't go on Pride weekend."

The city is stepping forward with a yet un-estimated amount of financial support to produce the party, with a renewed focus on security.

"Some people love Pink Saturday, some people would like to see it go away, but regardless of one's view, Pink Saturday is here," said Supervisor Scott Wiener, whose district includes the Castro.

Wiener told KTVU the footprint of the event may shrink and it will end as much as two hours earlier than previous years.

"We want to really get it back to its roots of being a community celebration of Pride. It starts out that way every year and then later in the evening, people show up who aren't necessarily wanting to celebrate Pride," said Wiener. "We are going to have increased security this year and that will be an additional cost and the city is helping with that."

It's also expected to be one of the largest Pink Saturdays in the event's history.