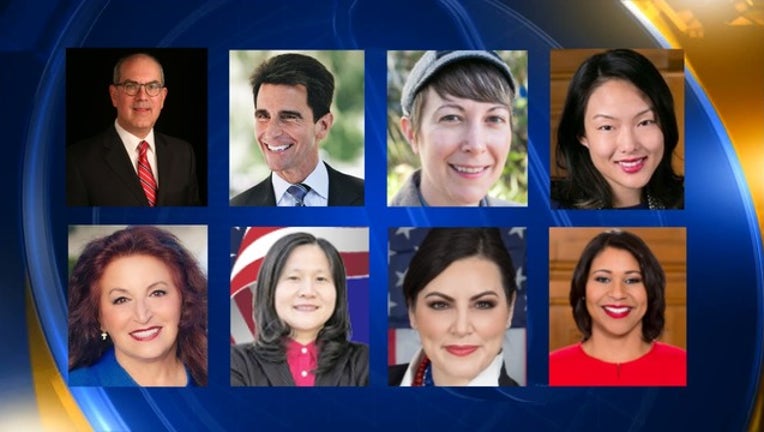 Eight people vie to be San Francisco's next mayor in the June 2018 primary election.

SAN FRANCISCO - Eight men and women with political experience that runs the gamut from state senator to student school board representative, are vying to be the next mayor of San Francisco.

They range in age from 40 to 68. One’s a civil rights attorney, another a social worker. Two members of the San Francisco Board of Supervisors are also in the running. Some are San Francisco natives, while others came to the city from out of state.

While the candidates on the June 5 special election ballot are as diverse as San Francisco itself, there are striking commonalities on their individual political agendas: fixing the city’s growing and chronic homelessness problem, improving affordable housing and cleaning up city streets.

“San Francisco can’t afford another decade of the same failed policies on homelessness,” said candidate Mark Leno. “Over 7,000 homeless people live on San Francisco’s streets, in our shelters and jails, and in tents and public parks.”

Statistics from the Department of Homelessness and Supportive Housing show that each year in San Francisco more than 20,000 people experience homelessness at some point.

“But San Francisco didn’t get here by chance — city hall has failed us,” said Leno, who has a detailed 15-point plan for dealing with the crisis, including using the $100 million he secured as a state senator to create 400 units of permanent housing.

Candidate Angela Alioto, a civil rights attorney and former president of the board of supervisors, is the daughter of the late Joseph Alioto, who served as San Francisco mayor from 1968 to 1976. Alioto, who has run unsuccessfully for mayor twice before, said finding permanent, supportive housing for the homeless is at the heart of her push to lead the city.

“We cannot continue to invest in programs that take in our most vulnerable, help them get their situations resolved, and then return them to the same toxic environment 120 days later,’’ she said.

Alioto also cites dirty streets as another major problem, citing statistics from the Department of Public Works that show that workers collected 55,000 pounds of debris from homeless encampments, including 4,000 needles, in a single week.

Furthermore, millions of dollars are spent each year on public works crews cleaning up after the homeless, she said. “They have the resources to clean our streets, but they are diverted to monitoring homeless camps, which is not their job,’’ said Alioto.

Candidate Jane Kim said waste on city streets isn’t just an eyesore, it’s an economic and environmental disaster and a public health crisis waiting to happen. As a member of the board of supervisors, she has pushed for additional funding to step-up street cleaning.

As mayor she said she would craft a plan to clean city streets, including doubling the number of public bathrooms in high problem areas to reduce public urination and defecation and cut the risk of disease. She also wants to double the number of street cleaners and appoint a “clean streets director’ to coordinate public upkeep and public health.

Richie Greenberg also hopes to be the next mayor of San Francisco and has a unique approach idea for how to control the homeless problem in the city: stop the flow of out-of-state transients. “As mayor, I will cease the incentives attracting those homeless from other cities to move here for free handouts,’’ he said on his web site.

Greenberg said nearly 30 percent of the estimated 7,000 homeless people in San Francisco come to the city from another city or state. “A priority will be a comprehensive review and performance audit of each and every homeless outreach agency. Our city will not have a homelessness industry. We have got to stop throwing taxpayers money at issues in hopes they go away,’’ said the Republican business consultant who describes himself as a moderate in a city that he says is in “progressive decline.”

While Greenberg is a newcomer to city politics, candidate London Breed said she has a long record of serving communities and improving the city’s housing, environment, public safety, transportation, and quality of life, including many initiatives to combat homelessness.

Breed has passed legislation to increase housing along transit corridors and prioritize neighborhood residents for the affordable homes in their communities.She helped transform unused public housing units into homes for homeless families, and is leading the effort to renovate thousands more.

She has fought for more navigation centers for the homeless and launched a task force to study if safe injection facilities can help IV drug users get off the streets and into treatment.

She is also working on improving mental health services for all San Franciscans. As the current president of the board of supervisors she lists homelessness, affordable housing and property crime as the three biggest issues facing San Francisco.

“San Francisco needs someone who is bold, who is fearless, who is prepared to take on many of the challenges that we know exist in our city. And I'm prepared to do just that,’’ said Breed, who was interim mayor for a short time after the death of Mayor Ed Lee last year.

Community housing advocate Amy Farah Weiss said she has been fighting for fair housing her entire career and will make the issue a top priority if she’s elected as mayor. One of her notable successes was founding a community benefit organization called Neighbors Developing Divisadero to support inclusive and sustainable housing policy and economic development.

Weiss said she has developed and piloted a plan to get 3,000 people out of crisis conditions and into housing that increases both neighborhood and individual well-being, health, and safety.

Weiss would like to redirect half of the city’s current $30 million budget for police and public works homeless encampment response into this project to heal the crisis at the root, and seek $15 million in matching contributions from local corporations and foundations.

Candidate Michelle Bravo lists her top three priorities as getting transients off the streets, providing adequate housing and transportation and not funding stun guns for police officers.

“I believe in transparency for better community. What this means is my mayoral experience will be open, communicative and inclusive of all San Franciscans,’’ said Bravo in a short video about her goals. “I plan to work closely with the San Francisco supervisors to ensure that all transients are provided shelter and services for the health and safety of all San Francisco residents.”

Ellen Lee Zhou, a family social work and union organizer, said homelessness can only be curbed by eliminating drug abuse, including recreational marijuana.“I am totally 101 percent against recreational cannabis. I've experienced many of our young people and homeless people on the street experience problems related to cannabis use,’’ wrote Zhou on a candidate mission statement.

“Cannabis is a federal regulated illegal alternative substance to treat patients who have health care issues. Medical cannabis is under medical doctor's prescription. Our current city administrators created unfair, unjust regulations that will create health problems for our children, youth, residents and visitors.”