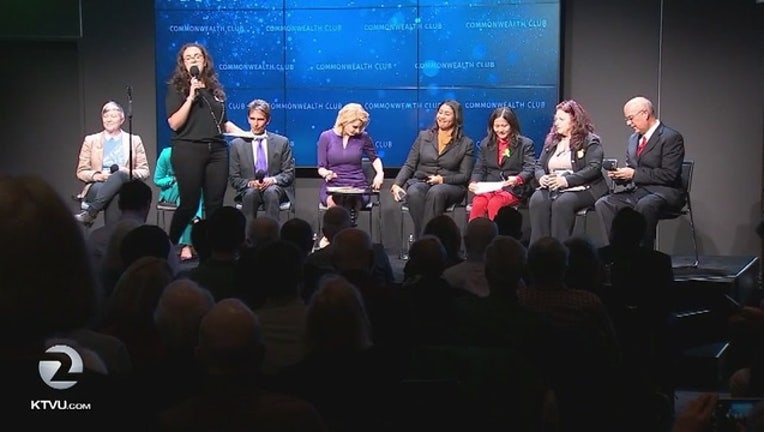 SAN FRANCISCO - The Commonwealth Club's mayoral forum on Monday featured seven candidates in what is likely the last event with all of them on stage together before the June special election.

Board of Supervisors President London Breed, the frontrunner in a poll last month, answered questions about housing and homelessness.

Two progressives, former State Senator Mark Leno and Supervisor Jane Kim are running a close second and third in that same poll, with similar policies. Leno was asked how they differ.

"I would have had a difference on the twitter tax break, that we should have had community benefits," said Leno who added that local hiring requirements would have benefitted San Franciscans.

Kim said after the debate she feels she has more local experience in City Hall and in the community than Leno and could get results more quickly.

"I want to rebuild the middle class here in the city of San Francisco again. I want to continue the work we've done to make to make city college free for all of our residents, to make child care affordable for every single family," said Kim.

Former supervisor Angela Alioto, said she would crack down on crime and modify the sanctuary city policy to turn undocumented felons to federal immigration agents.

"We have a left and left policy...my goal will be to bring back centrist policy," said Greenberg.

"I understand it would take a miracle for me to become mayor. But I'm open to miracles and I want to make miracles happen for San Francisco," said Weiss.

"I have (been) demanding and crying out for government change. Now is the time," said Zhou, who drew laughter and applause for her repeated vigorous assertions she would win and hire all the other candidates on stage.

Each candidate was asked to name their endorsement for second choice.

"My second choice is London Breed. And my third choice," said Breed, declining to endorse anyone else.

"My second is Mr. Greenberg and Angela," said Zhou.

"I have no number two or number three," said Greenberg.

As for alliances, Greenberg told KTVU after the debate that Clint Greiss, a staffer compensated by Breed's campaign, did approach the Republican Central Committee at their May 2nd meeting to request that they endorse Breed as their second choice. The Republicans asked if Breed would in return endorse Greenberg, the Republican, as her second choice.

Greenberg said Breed's campaign declined to endorse him and the Republican committee also declined the request from Greiss.

"Board President Breed never reached out to Richie Greenberg or any other candidate regarding ranked choice strategies; she is not interested in cutting any deals, and she never has been," said Tara Moriarty, a spokesperson for Breed's campaign. "She’s focused on earning every vote she can, on the strength of her practical solutions and bold leadership." Moriarty added that the staffer was found to be misrepresenting the campaign and action was taken action to prevent a similar incident in the future.

The June special election is being held to find someone who will fill the remaining one year of the late Ed Lee's mayoral term. Another election for a full term will be held in November 2019.