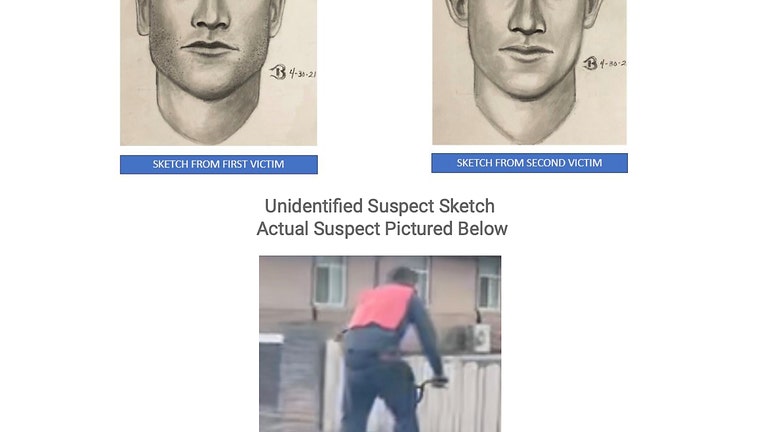 An assault with great bodily injury on two separate women occurred near Meridian Avenue and Fruitdale Avenue in San Jose, Calif on Wednesday, April 28, 2021. The suspect is described as a dark complected Hispanic male in his late twenties or early th

SAN JOSE, Calif. - The San Jose Police Department is asking the public to help identify and locate a suspect who attacked and injured two women on the same evening last week.

Around 7:50 p.m. on April 28, the suspect approached the first survivor in the area of Meridian and Fruitdale avenues while she was jogging and, after briefly speaking with her, attacked her, police said.

The woman managed to escape. The suspect then mounted his bicycle and rode a short distance where he confronted the second woman and attacked her before fleeing on his bike.

Police have released sketches drawn from the two survivors' descriptions and described him as a dark-skinned Hispanic man in his late 20s to early 30s with a medium build, standing around 5 feet 5 inches to 5 feet 8 inches tall with dark hair and dark eyes.

He was last reported wearing an orange vest and dark clothing and was last seen biking south on Meridian Avenue.

To remain anonymous, people can submit an anonymous tip at https://svcrimestoppers.org or call the Crime Stoppers tip line at (408) 947-STOP.

Anyone who provides information that assists in the arrest and conviction of the assailant may be eligible for a cash reward.