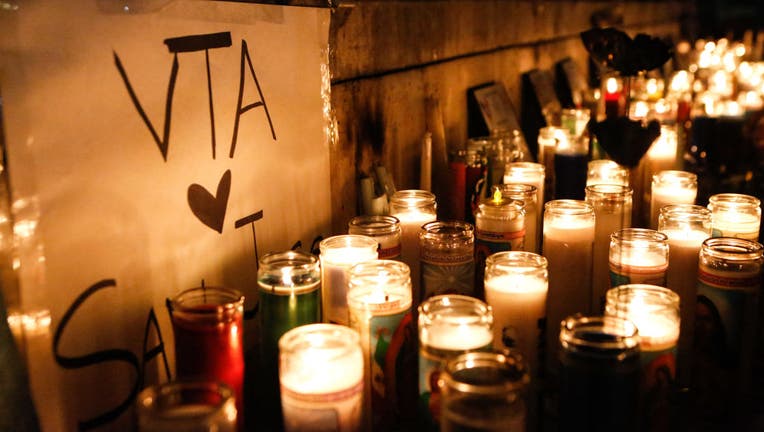 A memorial with candles for the victims of the San Jose VTA rail yard shooting is seen at the San Jose City Hall in San Jose, California, on May 27, 2021. (Photo by AMY OSBORNE/AFP via Getty Images)

SAN JOSE, Calif. - A mass shooting in San Jose that killed nine Valley Transportation Authority employees and also left the gunman dead when he killed himself now has the notorious distinction of being the Bay Area's deadliest gun massacre in history.

An early portrait of the now-dead attacker, Sam James Cassidy, 57, shows him to be a hot-tempered, bipolar VTA worker, who had long complained about his job and had at least two ended relationships.

He stormed into a morning meeting on Wednesday and used three weapons to fire off 39 bullets to kill people he had worked with. When authorities confronted him, he took his own life, according to the Santa Clara County Sheriff.

His actions have left friends and families grieving and in despair.

Before Wednesday's tragic event at the San Jose light rail yard on Younger Avenue, the deadliest mass shooting occurred about 45 miles away in San Francisco on July 1, 1993. That's when a disgruntled man, Gian Luigi Ferri of Los Angeles, entered the 101 California Street high-rise building and killed nine people, including himself.

"Nobody should have a gun. Not even the good people."

The South Bay in particular has also had its share of tragedy.

On July 28, 2019, gunman Santino Leganat killed three people - two children and a 25-year-old man - at the Gilroy Garlic Festival before police shot and killed him.

The bloodshed comes in a year that has seen a sharp increase in mass killings as the nation emerges from pandemic restrictions that closed many public places and kept people confined to their homes.

"The public mass shootings were suppressed in 2020. Now as we are coming out of the pandemic you see more of them," John Donohue, a Stanford University law professor who studies gun violence and mass shootings, told KTVU.

Experts attribute the rise in shootings last year to an increase in gun sales, stress over unemployment during the lockdown, and police departments unable to implement anti-violence programs because of COVID.

Experts say it is difficult to fully understand what provokes someone into a mass shooting because so many kill themselves, after killing others.

A database compiled by The Associated Press, USA Today and Northeastern University that tracks every mass killing over the last 15 years shows that San Jose is the 15th mass killing so far in 2021, all of them shootings.

Eighty six people have died in the shootings, compared with 106 for all of 2020. The database defines mass killings as four or more people dead, not including the shooter, meaning the overall toll of gun violence is much higher when adding in smaller incidents.

Newsom speaks at scene of VTA mass shooting: "What the hell is going on in the United States of America"

As is standard following one of these tragedies, some call for gun control reform, and others push back on it.

Bagga Singh, a cousin of Taptejdeep Singh, 36, who was one of the nine victims, said emphatically: "Nobody should have a gun. Not even the good people."

In reference to the VTA shooting, Democratic California Gov. Gavin Newsom called for nationwide gun reform through the passing of "commonsense gun laws."

At a news conference this week, Newsom said: "There's a numbness I imagine some of us are feeling about this because there's a sameness to this. Anywhere, USA."

Newsom also stated that the shooting "begs the damn question: what the hell is going on in the United States of America?"

KTVU's Rob Roth and Azenith Smith, and the Associated Press contributed to this report.