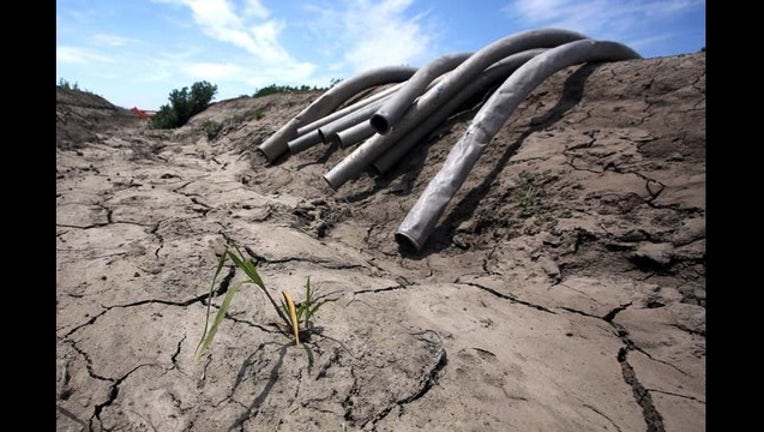 FILE - In this May 18, 2015 file photo, irrigation pipes sit along a dried irrigation canal on a field farmed by Gino Celli, who relies on senior water rights to water his crops, near Stockton, Calif. (AP Photo/Rich Pedroncelli, File)

SANTA CLARA, Calif. (BCN) - As the state experiences its fifth year of drought, the Santa Clara Valley Water District's board of directors is calling on people in the county to reduce their water use by 20 percent.

The board at its Tuesday meeting approved lowering the water usage reduction target to 20 percent due to some improvements over the winter, water district officials said.

The rains during the winter helped fill a few water service reservoirs and improve local groundwater conditions, but the district doesn't expect its water supplies to reach normal levels in the near future, according to water district officials.

"We are still in a drought. We don't know if next year is going to be another dry year. Four years of drought is not erased by one year of decent rain," board chairwoman Barbara Keegan said in a statement.

The board last year asked residents for a 30 percent reduction from their 2013 water use through this month, water district officials said.

The switch from 30 percent to 20 percent is a "relatively modest reduction," Keegan said.

County water users saved 27 percent in water last year and 27 percent from the start of the year through April, water district officials said.

The board also asked water providers in the area to require a 20 percent reduction among their customers and limit watering schedules to no more than three times a week, as opposed to two days a week that most local water companies have implemented since last year.