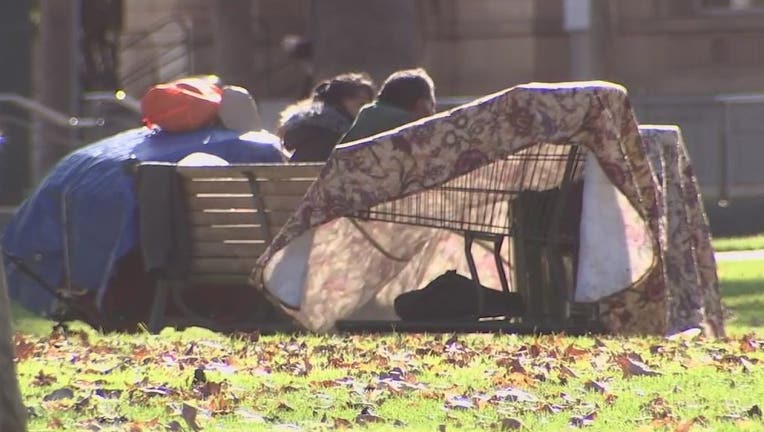 Homeless advocates are calling for immediate changes after a winter storm was tied to the deaths of at least five people who were homeless in San Jose. (KTVU FOX 2)

SAN JOSE, Calif. - Santa Clara County has received a $22 million grant from the state's Homekey program, which the county will use to purchase and convert a hotel into housing units for homeless residents.

The county will use the state's funding as well as $3 million from 2016's Measure A affordable housing bond to buy and renovate the Bella Vista Inn in Santa Clara.

Once completed, the project will include 67 interim housing units as well as supportive services. Construction is scheduled to begin in March, with an anticipated completion date in December, according to the county.

"This funding, along with the county's matching funds approved by voters, gets us closer to our mission of providing every resident the opportunity for safe and stable housing," said County Executive Dr. Jeffrey Smith.

The state created the Homekey program in 2020 with the intent of expanding housing access by converting vacant hotels, motels and other buildings into both permanent and interim housing.

The program grew out of the state's Project Roomkey, a similar process of leasing empty hotel and motel rooms to provide homeless residents shelter and a place to quarantine at the outset of the COVID-19 pandemic.

Santa Clara County has already utilized four Homekey funding awards to create 364 housing units. The county submitted eight applications for the current round of funding, including its application for the Bella Vista Inn.

County officials are also planning on a second phase, which is still under review, of the hotel's redevelopment that would result in 120 permanent housing units at the site.

"This is a big win that will further our mission to provide housing for every person in our area," Santa Clara County Officer of Supportive Housing Director Consuelo Hernandez said. "The relationships we've built across jurisdictions really show the importance of ending homelessness in every city and community in Santa Clara County."

The county has set a goal to house some 20,000 homeless residents by 2025. Nearly 5,000 have already been through the county's supportive housing system.