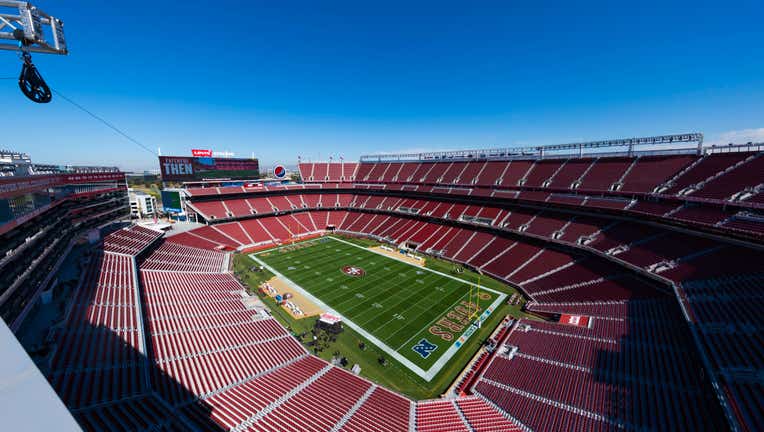 SANTA CLARA, CA - OCTOBER 07: General view of the interior of Levis Stadium from an elevated level during the NFL regular season football game between the Cleveland Browns and the San Francisco 49ers on Monday, Oct. 7, 2019 at Levi's Stadium in Santa

SANTA CLARA, Calif. - A battle between the City of Santa Clara and the San Francisco 49ers could be coming to an end as soon as Tuesday night.

The Santa Clara City Council is currently considering a settlement offer from the 49ers to end the long-standing dispute.

The city council went into closed session shortly after 3 p.m. on and could make an announcement about the fate of the settlement as soon as 7 p.m.  If a decision to settle is reached it would end a legal dispute that has stretched on three years.

Levi’s Stadium opened in July 2014 and the troubles between the 49ers and the City of Santa Clara have been brewing for nearly all of that time. Disputes over revenues, weekday event curfews, accounting practices, and the non-football uses of the stadium have generated plenty of bad blood between the team and the city. In 2019 the city held a news conference to announce it was terminating its agreement with the 49ers to operate the stadium.

"It's clear the 49ers performance off the field is terrible. That's why we can't continue to let them manage or mismanage our stadium, said Santa Clara Mayor Lisa Gillmor in 2019.

That decision resulted in a lawsuit with the team suing to maintain its operational control of the stadium. Now -- a potential settlement being offered by the 49ers includes an immediate $3.3 million dollar cash payment to the city’s general fund.  The 49ers also say it would save an estimated $2 million dollars per year in ongoing attorneys fees.

About two-thirds of the settlement payment would cover disputed public safety costs provided by the city for stadium events.

On Tuesday afternoon, the Santa Clara City Council met in public before moving into closed session to discussing the proposed settlement.

A majority of those who commented opposed the deal said the city, not the team, should be the ones dictating any settlement terms.

"Please let the legal process continue that will bring a better resolution for all of Santa Clara.  Please vote no on item 1A," said Teresa O’Neill, a former member of the city council.

The 49ers lawsuit contends the city’s 2019 decision violated a contract allowing the team to run day-to-day events at the stadium.

In a statement, the 49ers say: "We’re currently in discussions with city staff on a settlement that would inject millions directly into the general fund and avoid millions in future legal fees." The statement continued "Prolonged legal fights only benefit the lawyers, and we hope the city will take this significant step to restore this partnership and focus on generating revenue from the stadium."

The 49ers say their ultimate objective is to return to a successful private-public stadium relationship that existed in the earlier days of Levi's Stadium.