A Santa Rosa man was arrested for allegedly starting a small fire near Bay Village Shopping Center on Saturday.

SANTA ROSA, Calif. - A person who saw a man set a fire in a field next to a Santa Rosa shopping center Saturday morning was joined by several others who were nearby to surround and detain the suspect until police arrived.

Police responded to an 11 a.m. report of a subject who had lit a field on fire behind the Bay Village Shopping Center at 3080 Marlow Road, according to a news release issued Saturday night by Santa Rosa Police Department.

Officers found the suspect, 43-year-old Jacey Steven Ludwicki, of Santa Rosa, surrounded by several people, one of whom told police the suspect lit something on fire and dropped it on the ground before trying to fan the flames. 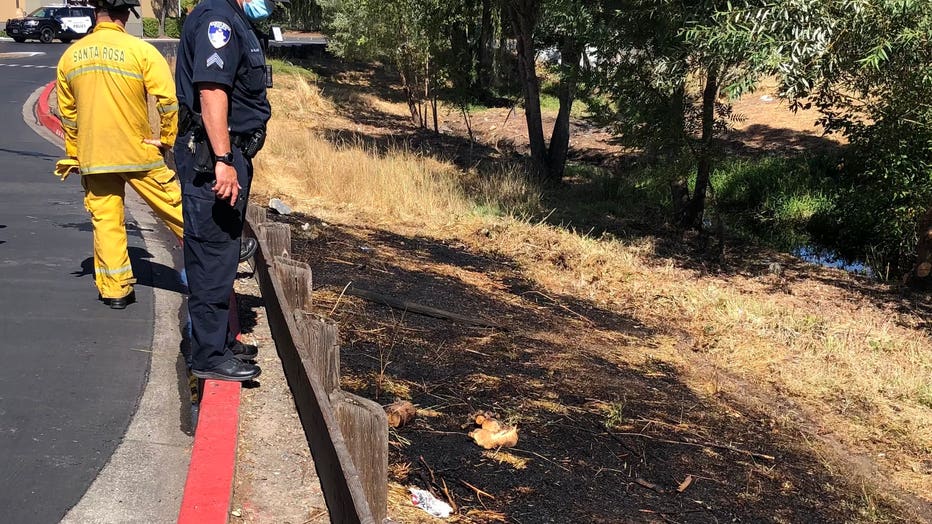 Site of an arson fire in Santa Rosa, where police arrested a suspect with the assistance of witnesses on Saturday, Sept. 11, 2021 (Courtesy of Santa Rosa Police Department)

Police arrested Ludwicki on suspicion of arson and violating his probation terms. Police said they found a lighter on Ludwicki, who admitted to intentionally lighting the fire.

Firefighters from the Santa Rosa Fire Department contained the fire to a 400-foot square area of grass.