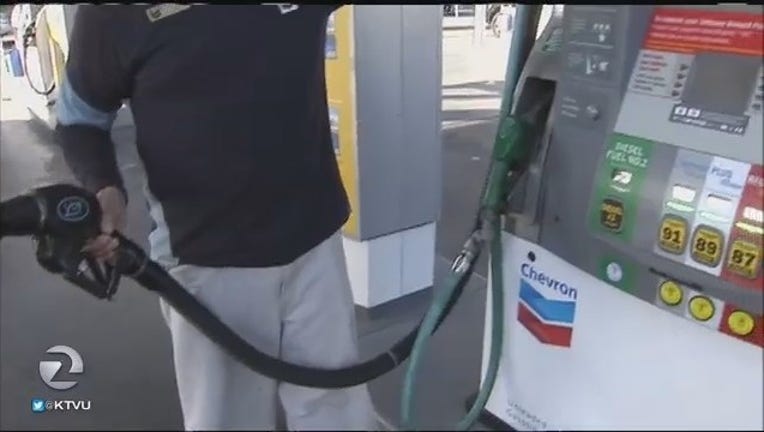 SANTA ROSA, Calif. (KTVU) - From the North Bay, there's a crime so simple it's complicated. The scam is pumping gas on another person's dime, right under their noses.

It's happened several times at Chevron stations on Bennett Valley Road in Santa Rosa and on Old Redwood Highway in Cotati.

"They did it on two different pumps, in daylight," cashier Rogger Duran told KTVU, as he patrolled the Santa Rosa location Friday evening.

Duran explained how thieves make a quick switch: moving the hoses from one side to the other and then wait and watch for an unsuspecting victim to pull in.

"If I'm the customer, I think I'm paying for gas," demonstrated Duran, "but the hose in my car isn't getting any gas. It's going in on the other side."

The thief, who has strategically pulled in on the opposite side, gets the fuel and drives away.

The first telltale sign for drivers would be a hose that's stretched across the pump in a position more horizontal than vertical.

But if the customer doesn't catch it, and sees their purchase tallying up in front of them, they don't suspect anything is amiss.

Victims were mystified and upset when their fuel gauges didn't move after a purchase.

They had a receipt but no gas. Many wondered if it was a pump problem or a car problem.

"After review of the video we saw what they were doing," Lynn D'Amato told KTVU.

D'Amato works at the corporate office of Redwood Oil Company, owner of 20 service stations in the region.

"Then we put two and two together, and we couldn't believe what we saw," exclaimed D'Amato, "they're taking our customers gas!"

They were even bold enough to come into the station's convenience store as they waited for victims.

On video, one man is seen messing with the pump hoses; then a white van sits off to the side waiting.

A few minutes later, when a customer arrives, the van pulls into position.

Duran and other employees regularly patrol the pumps now, watching for hoses that have been rearranged.

Some customers are confident they'd never fall for it, because they can feel the gas coming through the hose.

"I always hold mine," explained Jonathan Vejar of Santa Rosa," I never walk away from it, and I know when the gas is coming through. I'm always right here by my car."

But often people are distracted, and may walk off or be preoccupied with their phone.

The thieves even make a point of luring them away from the pump.

"They tell them their tires look a little low," noted Duran, "so the customer goes over and starts looking around at their tires, not realizing that their gas is being taken."

Santa Rosa Police were startled by the unusual thefts, and Redwood Oil thought twice about publicizing them because of possible copycats, but decided in favor of warning people.

"This is happening and it could happen to anybody," declared D'Amato, so just be aware of what's going on around you."

Warning labels advising customers to "Look Up!" to examine the nozzle and hose are now posted on the pumps.