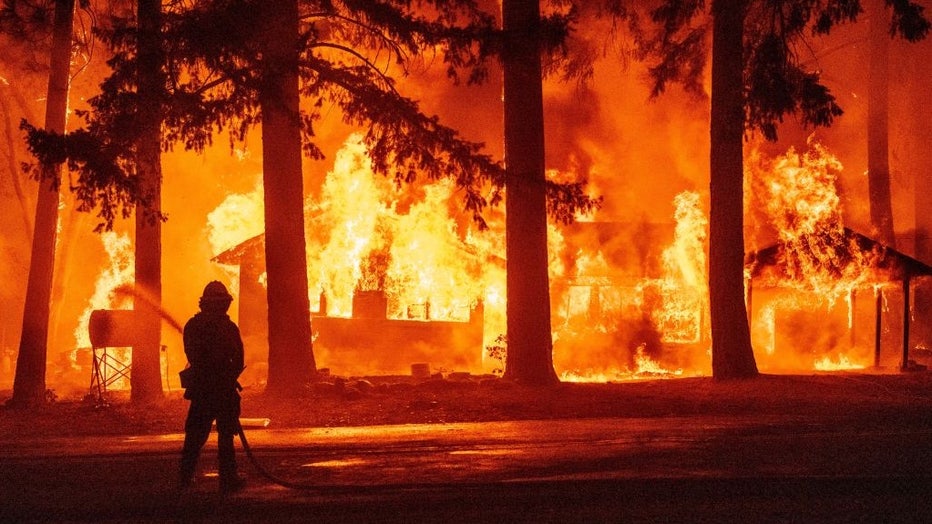 TOPSHOT - A firefighter sprays water on a propane tank as a home burns due to the Dixie fire in the Indian Falls neighborhood of unincorporated Plumas County, California on July 24, 2021. - The Dixie fire, which started only a few miles from the orig

The fire erupted on July 14. Over the weekend, it merged with the Fly Fire which broke out last Thursday, north of the town of Quincy. On Saturday, the combined fires ripped through the community of Indian Falls.

Timelapse video of Fly Fire in Plumas County on July 24, 2021

As of Monday morning, flames had consumed 197,487 acres, destroying at least 16 structures, and prompting widespread evacuation orders and warnings as well as road closures. Soaring, above normal temperatures were expected. 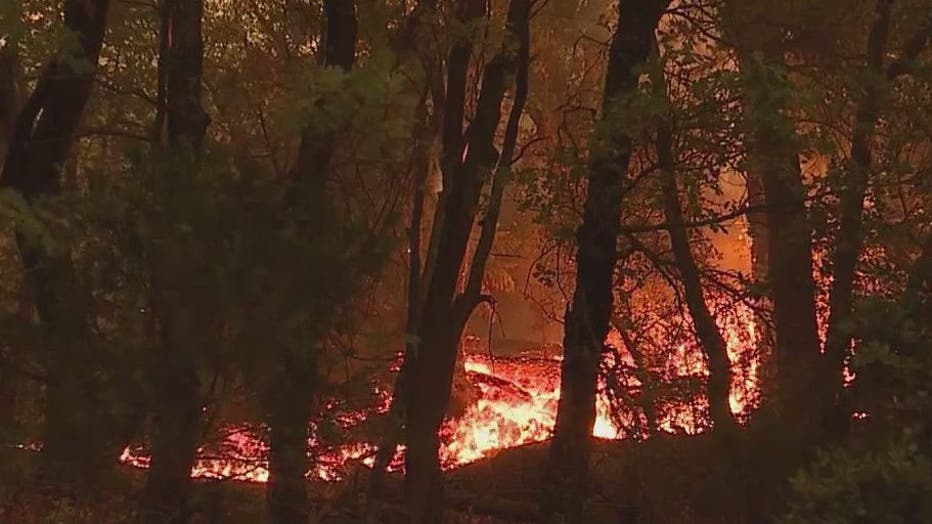 Cal Fire said conditions on Sunday helped crews on the fire lines. A thick covering of smoke over the area provided shade over the fire. "Temperatures decreased and fire behavior moderated," the agency said in its update on Monday, adding, "The significant change in fire intensity allowed firefighters to construct dozer and hand lines in some key areas."

The fire stood at 22 percent containment. Smoke from the Dixie Fire (combined with other western U.S. fires) have prompted environmental officials to keep a close eye on fire activity.

On Monday, The National Oceanic and Atmospheric Administration (NOAA) shared satellite images of the smoke from the Dixie Fire.

"As wildfires continue to burn across western North America, @NOAA's #GOESEast satellite is focusing on California's largest, the #DixieFire, in today's #ImageoftheDay," the agency shared on Twitter.

NOAA’s satellite images came from last Thursday, showing the movement of the heavy smoke from the Dixie and Fly fires before they merged.

The agency said that "blazing wildfires across the western U.S. and Canada... have produced massive amounts of smoke that is blanketing North America in a hazy pall, fueled by severe heat waves and deepening drought."

Smoke from the western wildfires, including Oregon’s massive 409,611 acre Bootleg Fire, has traveled across the U.S. and even been reported as far as parts of western and north-central New York.

So far, the Bay Area has been spared from smokey, unhealthy air, and the region has seen nothing close to the unsafe air conditions that were brought on by wildfires from last summer and fall.

"We have been exceptionally lucky," Kristine Roselius, a spokeswoman for the Bay Area Air Quality Management District (BAAQMD) told KTVU. "We have had onshore winds that, for the most part, have pushed the smoke out."

But Roselius warned that changing weather conditions could adversely affect things quickly. "If the wind shifts, we would get smoke impacts," she said.

The air quality district said its meteorologist expected the conditions to remain the same in the coming days. "The onshore winds will mostly continue into next week," Roselius said. She hinted there were slight concerns about Thursday, but added that it was still too early to say if the wind patterns would shift.

Updated information on air quality in the region can be monitored through BAAQMD's site or through the Environmental Protection Agency's Fire and Smoke map.

The air quality district also said that residents can take actions now to prepare for the possibility of unhealthy wildfire smoke-tainted air.

"One thing I like to stress about air filtration units and HVAC MERV 13 filters is to buy them now," Roselius said, adding, "They are very difficult to find when smoke is blanketing the region."

While the Bay Area’s air quality remained good for the time being, the heavy smoke from the Dixie Fire as well as the Tamarack Fire in Alpine County was having negative effects on the air in the Tahoe region, where wildfire smoke advisories have been issued. 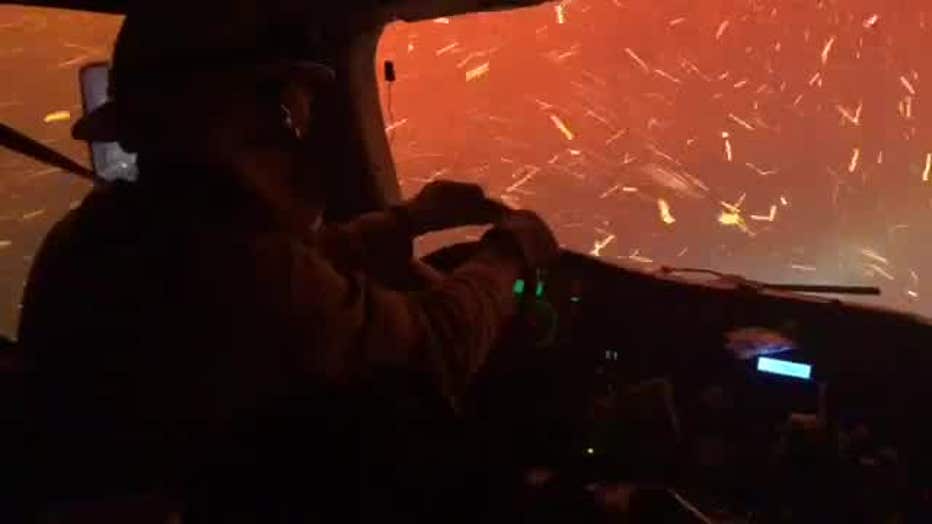 The air quality index (AQI) on Monday measured in the 150-180 range in the region. An AQI greater than 150 is considered unhealthy not only for sensitive groups but for the general population.

The Tamarack Fire had consumed 67,764 acres and was 45 percent contained.

SEE ALSO: Wildfire outlook continues to worsen for Western US

On Monday, there was positive news coming out of that fire area, with crews reporting "more significant signs of progress." U.S. Forest Service officials said that key roads, Highway 395 on the east side of the fire and Highway 88 on the west, have reopened.

Evacuations have also been lifted for many residents in the fire area. "Yesterday authorities in Alpine and Douglas Counties ended evacuations in 15 communities, meaning nearly 2,000 residents can return to their homes. The number of people still under evacuation orders is now approximately 300," fire officials said in their daily update.

There was also news that Lake Tahoe wildlife workers on Sunday rescued a black bear cub that had been injured in the Tamarack Fire. Alpine County Unified Command shared images of the bear that had been retrieved, evaluated and bandaged up from burns suffered in the fire. 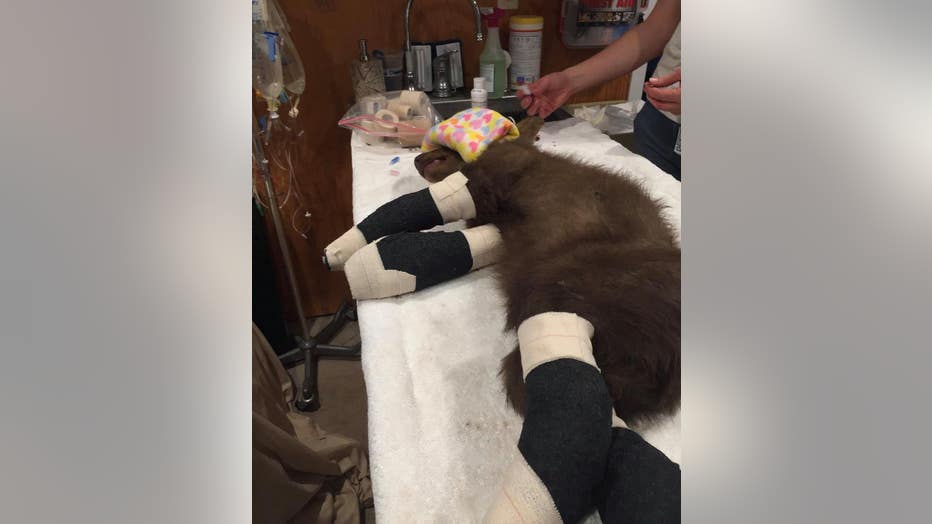 "The injuries to the animal were a result of the Tamarack Fire and the mother bear could not be located," county officials said. "As a result, the Lake Tahoe Wildlife Care staff successfully located and transported the bear to their facility in South Lake Tahoe." 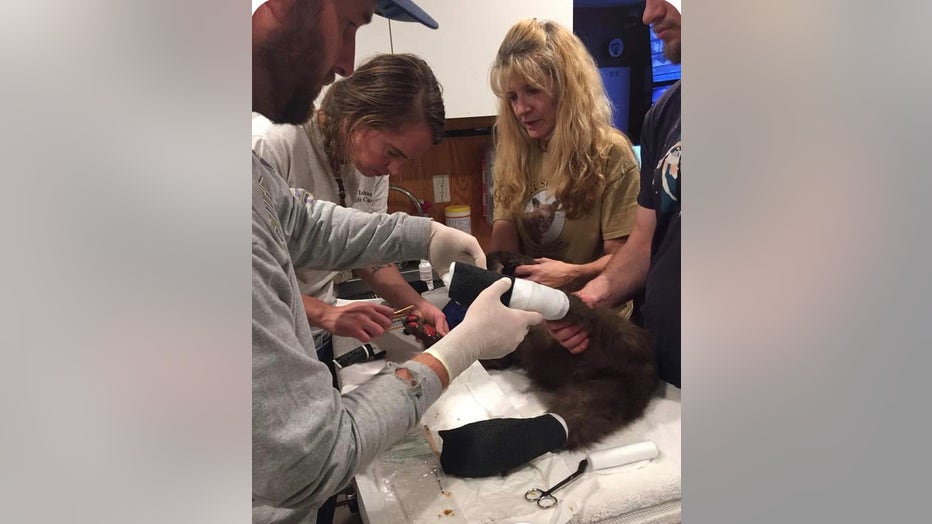 Officials said that the bear cub would remain in the care of  Lake Tahoe Wildlife Care until it's fully rehabilitated.

"We are grateful for their quick and effective response to this situation," said Alpine County Public Information Officer JT Chevallier, adding, "We are hopeful for a full and speedy recovery for ‘Tamarack,’ our four-legged, Alpine County Resident." 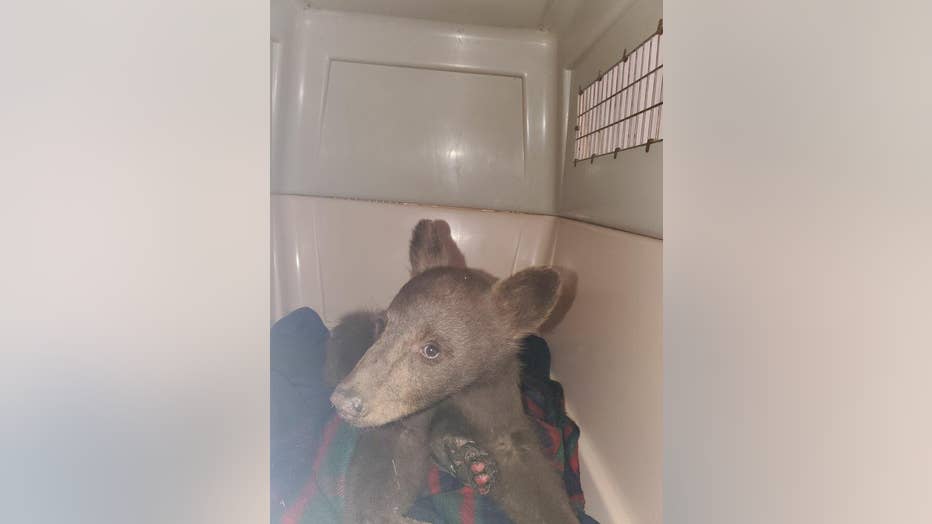 Injured black bear cub is rescued from the Tamarack Fire in Alpine County on July 25, 2021.

With the imminent threat the wildfires posed to wildlife, anyone who came across an injured animal was encouraged to contact Lake Tahoe Wildlife Care at 530-577-2273 or the California Department of Fish and Wildlife at 916-445-0411.