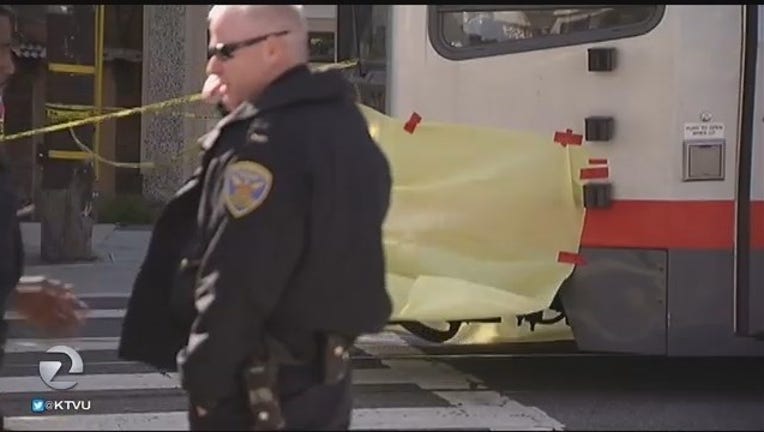 SAN FRANCISCO (KTVU & Wires) -- A middle school attended by a 12-year-old boy who died Tuesday when he was struck by a San Francisco Municipal Railway light-rail vehicle will hold events throughout this week to honor his memory, a school official said.

Aptos Middle School will allow students to stop by the library on campus to make cards for Andrew Wu, on Wednesday.

In addition, the school will also begin accepting donations that will go to the boy's family because they are in dire need of donations, she said.

On Friday, the school will also hold a moment of silence for Andrew and allow students to share memories of him.

Andrew was struck in a collision reported at 8:28 a.m. Tuesday at the intersection of Lakeview and San Jose avenues in the city's Ingleside neighborhood as he was running across a crosswalk.

He was pronounced dead at the scene and firefighters had to remove his body from underneath the Muni vehicle.

Nicole Ferrara, executive director of Walk San Francisco, a pedestrian advocacy organization that works with the city to make streets and neighborhoods more walking-friendly, said she hopes the intersection where Andrew was killed gets additional traffic safety measures installed.

"The intersection where this child was hit is one of our city's highest injury corridors," Ferrara said.

The three-way intersection has only one stop sign on Lakeview Avenue just before it ends at San Jose Avenue. There are only two white striped crosswalks and no stop signs on San Jose Avenue in either direction.

"The intersection will hopefully get a rapid flashing beacon to help drivers see people in the crosswalk. A couple of painted lines isn't enough to make someone safe from a light-rail vehicle," Ferrara said.

In response to a Vision Zero policy the city adopted last year, which aims to eliminate all traffic-related deaths in San Francisco by 2024, Ferrara said "10 years is really not fast enough. We need to speed that timeline up."