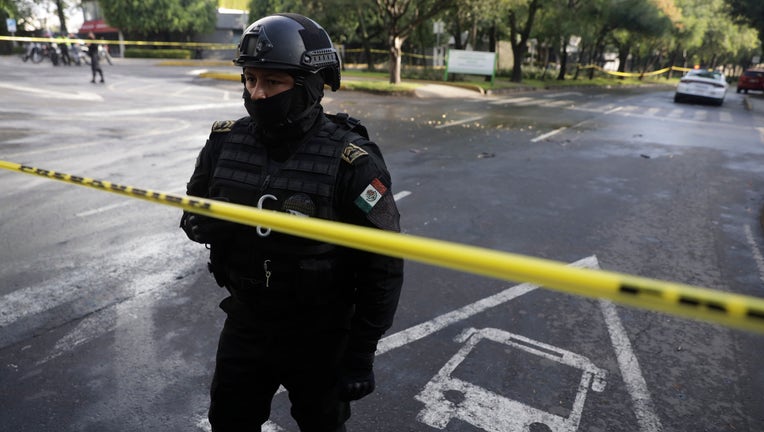 MEXICO CITY, MEXICO - JUNE 26, 2020: A officer guards crime zone where the secretary of Citizen Security of Mexico City, Omar Garcia Harfuch was the victim of an attack on Reforma Avenue in the Lomas de chapultepec neighborhood. Approximately during

Police searching for a 2-year-old boy who went missing from a marketplace in southern Mexico led authorities to a house where 23 abducted children were being kept and forced to sell trinkets in the street.

The children were being kept in squalid conditions and physically and psychologically abused and manipulated to sell handcrafted carvings and embroidered cloth in the colonial city of San Cristobal de las Casas, authorities said.

Most of the victims were between the ages of 2 and 15, but police said they discovered three babies between 3 and 20 months old during the raid of the house on Monday. Three women were arrested and may face child trafficking charges, Chiapas state prosecutors said.

Authorities believe the older victims were also used to lure or kidnap younger children to add to the group. All of the rescued children are now in the custody of child welfare officials.

“According to the children, many of them were forced to go out on the streets to sell things, and moreover they were forced to return with a certain minimum amount of money for the right to get food and a place to sleep at the house,” said state prosecutor Jorge Llaven.

According to video presented by the prosecutors, many of the children slept on what appeared to be sheets of cardboard and blankets on a cement floor and suffered from malnutrition.

Police were originally investigating the disappearance of Dylan Esaú Gómez Pérez, who went missing from a public market in San Cristobal on June 30.

A surveillance camera from a nearby shop showed that a young girl who appeared to be about 13 grabbed the little boy by the hand and led him away.

Despite the grisly discovery in the house, prosecutors did not confirm that Pérez was one of the victims that were rescued from forced labor and his mother is pleading with authorities to widen the investigation to find him.

“None of the children (rescued) is my son,” Pérez's mother said in an interview with local news reporters outside of the National Palace in Mexico City, where she traveled to petition President Andrés Manuel López Obrador to help find her son.

“I haven't heard anything about my son,” she said tearfully.