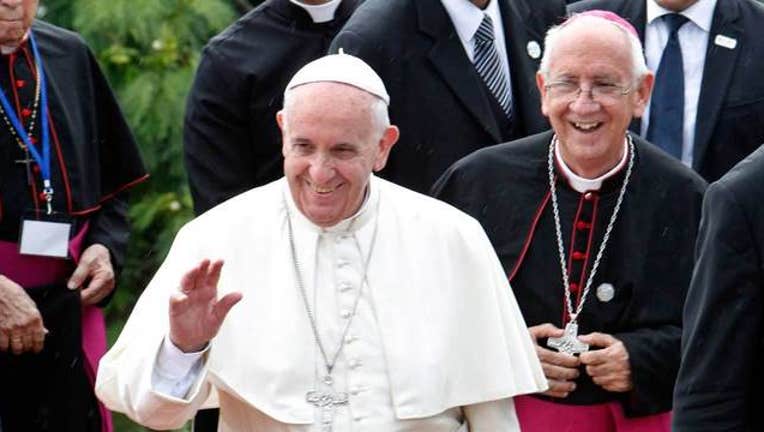 SANTIAGO, Cuba (AP) — Security was tight Monday for Pope Francis after a dissident got close enough to touch the popemobile a day earlier and at least three other opposition members were thwarted trying to accept Vatican invitations to greet the pontiff at ceremonies in Havana.

Despite what appeared to be thousands of plainclothes and uniformed security officers in Havana's Plaza of the Revolution during a papal Mass on Sunday, a man began emotionally appealing to the pope and grabbing onto the popemobile as it drove through the crowd before the service.

Video of the incident showed Francis touching the man's head and hand before he was pulled away by security officers as he cried out to the pope. Authorities arrested several other people nearby who appeared to rush in to join his protest.

Jose Daniel Ferrer, head of the Santiago-based opposition group Patriotic Union of Cuba, said Monday that the man who got close to the pope was a member of his organization.

He identified the man as Zaqueo Baez Guerrero, a 34-year-old Havana resident. Ferrer said the man called him from a holding center after being arrested and reported he had told the pope that "this is a dictatorship that represses the people and oppresses the opposition."

Vatican officials did not comment in detail on the Sunday incidents involving dissidents, other than saying that some dissidents had been invited to papal events but no private meetings were planned. Cuban officials have made no public statements about dissident activities during the pope visit.

At least three high-profile dissidents said they were detained by Cuban security officials Sunday after the papal ambassador to Cuba invited them to public events where they could be greeted by the pope. Francis had come under criticism before the trip for not scheduling private meetings with dissidents on the island.

"It really shows the intolerance of the totalitarian Castro regime and the lack of respect to the Vatican, which invited us," said Berta Soler, head of the well-known opposition group Ladies in White.

Even a public greeting to specific dissidents would have been novel for a papal visit to Cuba.

Pope John Paul II did not meet with dissidents when he visited in 1998. When Pope Benedict XVI visited Cuba in 2012, dissidents complained that dozens or possibly hundreds of their cellphones were blocked, presumably to keep them from organizing themselves and communicating with the outside world during the trip.

In Santiago, a man was arrested March 26, 2012, after shouting "Down with the revolution! Down with the dictatorship" at Benedict's Mass at the city's main square.

Before Benedict's visit, 13 dissidents occupied a Havana church demanding an audience with the pope. They later changed their demand to ask that he mediate a list of grievances with the government, including the end of communist rule and the creation of a transition government. They were evicted by police a few days later with the church's blessing after Roman Catholic authorities secured a promise from the government that none would be prosecuted.

Marta Beatriz Roque, one of the dissidents who reported being detained Sunday on her way to a papal event, had no criticism for church officials.

"Personally I feel very satisfied with the recognition implied by the fact that they invited us to the pope's activities," she said.