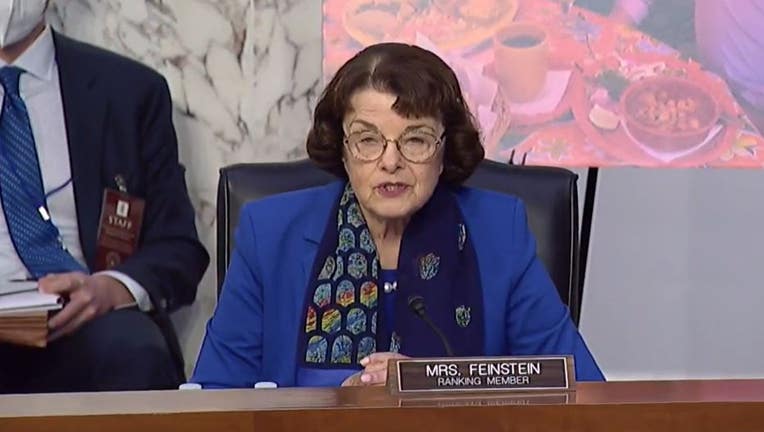 SAN FRANCISCO - At 88-years old and having recently endured the death of her husband, U.S. Sen. Dianne Feinstein of California once again finds herself defending her mental fitness to serve out the rest of her term.

In an article published Thursday in the San Francisco Chronicle, an anonymous source, only identified as a California lawmaker in Congress, said in a lengthy interaction with Feinstein, that they had to reintroduce themselves to her multiple times.

The Chronicle said senators and former Feinstein staffers in recent interviews, told the paper that the senator's memory is deteriorating.

In a statement to KTVU, Feinstein says she remains committed to Californians on the economy, and what she calls key issues in the state such as water and fire.

"While I have focused for much of the past year on my husband’s health and ultimate passing, I have remained committed to achieving results and I’d put my record up against anyone’s," Feinstein fired back.

Her husband of more than 40 years, Richard Blum, died after a long battle with cancer in February.

Feinstein pointed to other recent accomplishments including; the reauthorization of the bipartisan Violence Against Women Act, claiming to have secured more direct government funding for California than any other Democratic senator except for the chairman of the Appropriations Committee. She's also preparing the state for its inevitable wildfire season by securing funding to retain federal firefighters.

The crafty veteran politician and former San Francisco mayor pointed to her record with emphasis in her statement's bottom line.

"The real question is whether I’m still an effective representative for 40 million Californians, and the record shows that I am."

In a statement on this report, House Speaker Nancy Pelosi called her colleague a "workhorse for the California people of California and a respected leader among her colleagues in the Senate."

Pelosi said Feinstein was instrumental in the historic confirmation of President Biden's Supreme Court nominee, Judge Ketanji Brown Jackson. In addition, she called her an unsurpassed leader in the fight against gun violence.

"It is unconscionable that, just weeks after losing her beloved husband of more than four decades and after decades of outstanding leadership to our City and State, she is being subjected to these ridiculous attacks that are beneath the dignity in which she has led and the esteem in which she is held," Pelosi's statement read.

This isn't the first time Sen. Feinstein's mental capacity to serve has been scrutinized. In December 2020, she had to respond to similar reports by saying she was not considering leaving the Senate early.

"I don’t feel my cognitive abilities have diminished. Do I forget something sometimes? Quite possibly," Feinstein told the L.A. Times in an interview at that time.