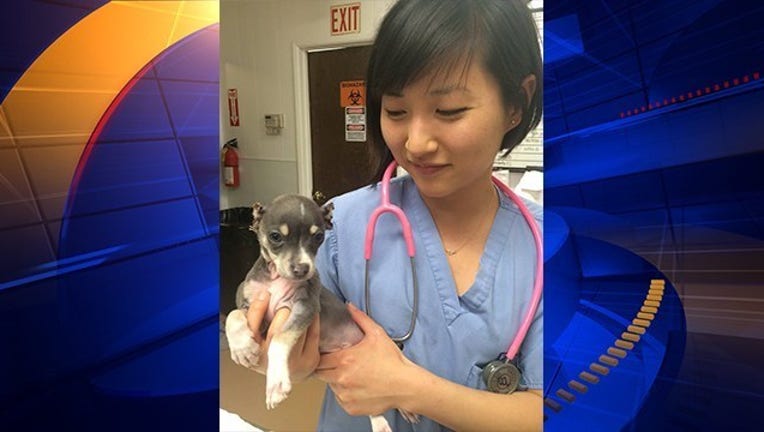 ANTIOCH, Calif. (KTVU) – An 8-week-old puppy who was found outside the Antioch Animal Shelter, covered in apparent chemical burns, is taking a little longer to recover than expected.

Fireman, a Chihuahua mix, was wincing in pain when he was discovered at the shelter in early April.

Veterinarians had to remove Fireman's outer ears. On its Facebook page Umbrella of Hope wrote, "He is healing more slowly than expected but is otherwise doing well."

Fireman was found in the play area at Antioch Animal Services. The area is surrounded by a six foot tall fence and volunteers say they don't know who may have dropped him off, or how they were able to.

Kristy Keusch, one of the volunteers, decided to foster Fireman. Keusch says she can't figure out what caused the dog's injuries. "If he were to fall or stand in a chemical it would affect his paws, but his paws are not affected. I feel someone tortured him."

Fireman is hoping someday to find a loving full-time home.

Umbrella of Hope says its current time frame for Fireman's adoption is mid-June due to his physical and emotional wounds that need time to heal. Initially they thought he'd be ready for adoption in May.

Umbrella of Hope estimates it has received more than 1,000 offers to Adopt Fireman. They can't take applications until Fireman is officially up for adoption, and are encouraging people to consider other animals in need of loving homes.

They have the following message for people who are interested in Fireman's story, "Every homeless dog is Fireman. There are dogs in rescues and shelters all over this country who have a story about their past that is not warm and fuzzy. They have been abused, neglected or abandoned. They are all Fireman. And even though they have not been on the news -- every single one of them deserves a home and a family who will give them a new story. Fireman's mission is to remind people that they should adopt THOSE dogs too and when they go, to please tell the shelter/rescue that #firemansentme. We hope to start a movement by using Fireman's media story to help all of the dogs (cats, birds, rabbits, reptiles etc.) who are just as deserving of a home find their forever families too."