This marks the third SFPD officer to be criminally charged or indicted in less than a month.

Officer Terrance Stangel faces felony charges for beating Dacari Spiers with his baton on October 7, 2019. Charges against Stangel include assault with a deadly weapon, battery with serious bodily injury, and assault under color of authority.

Spiers, whose leg and wrist were broken in the beating, had alleged through his attorneys that he was attacked for no reason. 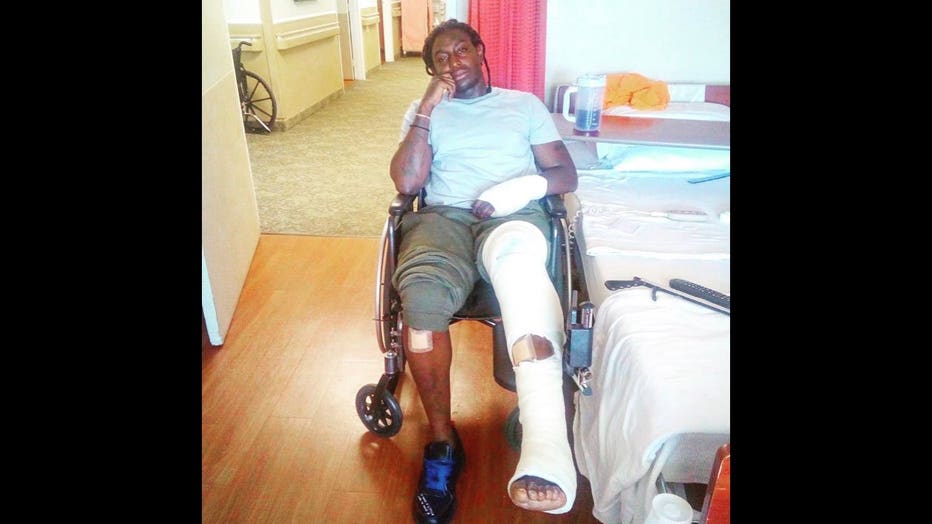 Dacari Spiers, victim of a beating by an SFPD officer at Fisherman's Wharf in 2019 the district attorney calls, "excessive and unlawful force"

On the night of the incident, Spiers was consoling his girlfriend who had realized her wallet was stolen. A 911 domestic violence call was made, although two arriving officers witnessed no physical violence or unlawful conduct by the couple, according to the D.A.'s complaint.

The D.A.'s office said Officer Cuahtemoc Martinez approached Spiers first. Martinez ordered Spiers to turn around, ignoring questions from the couple over what Spiers had done. Martinez tried to grab Spiers who insisted he had done nothing wrong. Police body camera footage captured much of the incident.

That's when Stangel approaches Spiers from behind and allegedly begins striking him with his baton as Spiers yells stop. He was then forced to the ground.

The incident left Spiers, a former Uber driver who had worked as a peer counselor, in a wheelchair during his recovery. He was never arrested.

“Officers responding to a call have a duty to promote public safety—not to turn to violence as a show of authority,” said District Attorney Boudin. “This case is an example of an officer unnecessarily escalating a situation and then violently beating a Black man whom he had no legal basis to even arrest. Officers who not only fail to promote safety but actively harm others must—and in my administration will—be held accountable.”

“Growing up in the 1970s in San Francisco seeing police commit violence on Black men and never being held accountable made me feel like being Black meant we were less than,” she said. “Today I have tears in my eyes to hear that under the Office of the San Francisco District Attorney Chesa Boudin, officers are being charged, history is being made, and Black people are finally being seen.”

Stangel's attorney Nicole Pifari issued a statement on Monday that said the officers were doing their job by responding and trying to protect someone who was "reportedly being strangled."

The attorney with Rains Lucia Stern St. Phalle & Silver, added that Boudin got facts about the case wrong when he characterized the 911 caller as a, "racially-biased Karen". They said the caller was a Black woman.

On Nov. 23 Boudin charged a rookie officer with manslaughter. It marked the first time the DA's Office has filed homicide charges against law enforcement for homicide while on duty.

Then on Dec. 7, Boudin asked both Jamaica Hampton and the officer who shot him to surrender after they were indicted by a grand jury. Hampton allegedly cut an officer with a glass bottle. Hampton was paralyzed from the waist down in the shooting.

A warrant is out for Stangel's arrest. The district attorney’s office is not requesting Stangel's pretrial detention.