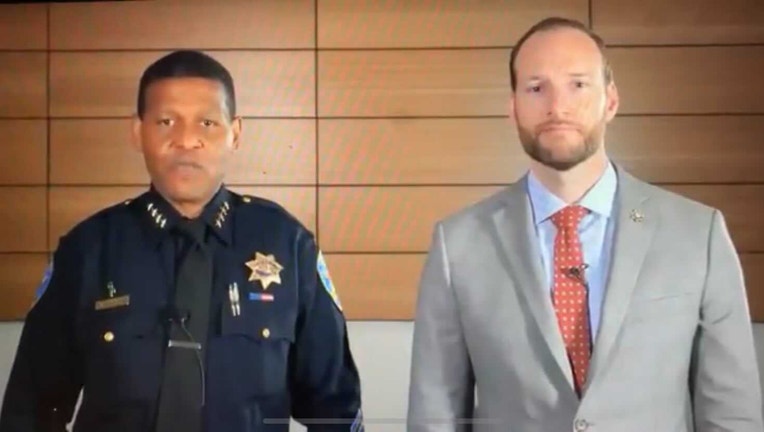 SFPD Bill Scott and District Attorney give a joint press conference before a feud erupted between the two top law enforcement officials.

SAN FRANCISCO - The feud between two of San Francisco’s top law enforcement officials continued Tuesday – this time with District Attorney Chesa Boudin accusing police Chief Bill Scott of violating an agreement between the offices that is at the center of a swirling controversy around police reform and use of force.

Boudin sent a pointed letter to the chief pushing back on accusations that his office committed misconduct in prosecuting Officer Terrance Stangle in a 2019 beating on Fisherman’s Wharf.

A conflict between San Francisco's police chief and the city's district attorney continues to heat up. This comes after the police chief ended an agreement, which gave the D.A. the authority to investigate police use-of-force cases.

The misconduct accusations prompted Scott last week to pull out of the agreement that gave the district attorney’s office authority in police use-of-force cases – one of the defining reforms the department took on following several controversial police killings before Scott was appointed in 2016.

Boudin’s letter added a new twist to the still-unfolding saga, accusing the chief of failing to disclose information to his office about the Stangel investigation. What’s more, Boudin said his office never violated the agreement in the first place – which the chief suggested – because it had been amended several times in recent years.

"At the outset, I want to be clear: your decision to walk away from this agreement will not stop the District Attorney’s Office from working to protect the residents of San Francisco harmed by police violence," Boudin wrote.

"Based on sworn testimony and evidence…it is clear to the chief of police — as it should be to any reasonable observer — that the San Francisco District Attorney’s office has breached its agreement and betrayed a public trust both our departments owe to the San Franciscans we serve," Dorsey said in a statement.

But part of the chief’s justification for pulling out of the agreement with the DA, was based in part on a separate issue. Stangel’s attorneys said Hayashi failed to share information with the police department about its investigation into Stangel’s alleged victim, Dacari Spiers in December 2019.

At the time, the district attorney was not required to share the information, under the agreement – or memorandum of understanding, Boudin said.

"The language of the 2019 MOU reveals that the SFDA did not violate the MOU terms as you allege," Boudin wrote. "According to the language of the 2019 MOU, which delineates the information sharing within the structure of two independent investigations, the SFDA’s office should provide the evidence that it gathers ‘upon declination of criminal charges or upon completion of all prosecutions.’ The prosecution in this case, as you know, remains ongoing; as a result, discovery of non-protected evidence has not been triggered."

The swirling controversy will take center stage at Wednesday’s police commission meeting, where the commission is expected to address the accusations on both sides, while attempting to preserve the vital agreement between the two offices.

"I am mindful that we are steadying the ship," commission President Malia Cohen said in an interview with KTVU on Tuesday. "You’ve got other cities and municipalities in the state of California and across the country that are looking at and watching this."

Cristine Soto DeBerry helped draft the agreement under former District Attorney George Gascon. She now heads the Prosecutor’s Alliance of California, of which Boudin and Gascon are members.

"Unilaterally pulling out of an agreement that took the city six years to get to that arrival is a very drastic step," she said. "We were making real progress in this city under this agreement. The answer is not to throw this out."