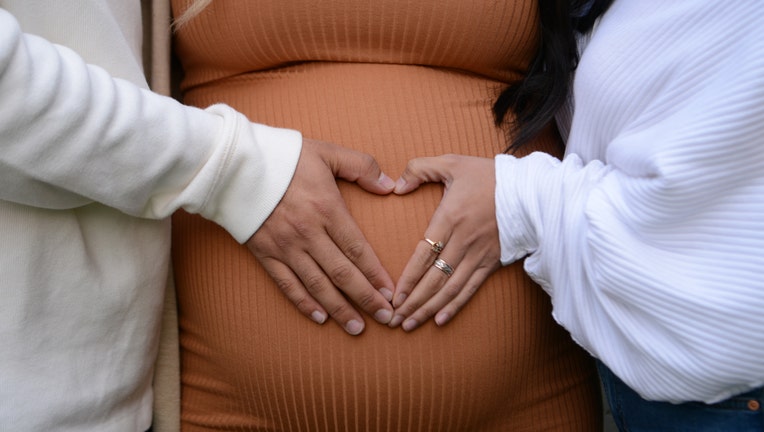 A pregnant woman and friends pose for a photo at a baby shower on November 10, 2018 in Pittsburg, Calif. (Ray Saint Germain/Bay City News)

Since 2021, the Abundant Birth Project has provided an additional $1,000 a month to 150 at-risk pregnant women of color in efforts to mitigate racial birth disparities.

Now backed by a multi-million-dollar state grant from the California Department of Social Services, the program will work with local health organizations to serve 425 mothers residing in Alameda, Contra Costa, Los Angeles and Riverside counties for the next two or three years.

"Thank you to the state of California for this crucial investment in the Abundant Birth Project as it works diligently to minimize racial health disparities caused by financial stressors," said Dr. Grant Colfax, San Francisco Director of Health. "We are so proud and excited to see a San Francisco program grow to help hundreds more Black birthing parents in California and give infants the best chance for a healthy start in life."

The first-in-the-nation program was put on by the city's public health department and Expecting Justice, an organization that advocates for safe births for Black and Asian American and Pacific Islander women.

The project aims to prevent premature births, which are nearly twice as likely to happen to Black women compared to white women in San Francisco, according to the city's Office of Financial Empowerment.

Expecting Justice said this is because women of color face greater challenges during pregnancy due to interpersonal, institutional and structural racism, as found in the health care industry and the ever-growing income gap.

These disparities often leave mothers without basic needs, greater stress and worsened health conditions, said the organization.   Expecting Justice's approach is to supplement women with additional cash to ease the financial stress that holds them back from putting their health first, which ultimately keeps their expected child healthy, too.

As women receive funds, researchers from University of California at San Francisco, UC Berkeley and UC Davis will monitor how extra cash can help mothers and their babies.

"For so long, Black women have been excluded from the resources needed to have safe and healthy pregnancies. This funding will provide pregnant people with economic stability during this critical phase in their lives while allowing public health institutions to test a novel and promising public health intervention," said Dr. Zea Malawa, director of Expecting Justice.

San Francisco Mayor London Breed said she committed an additional $1.5 million to sustain the project for another year after it has "proven to be successful" in helping Black families overcome these socio-economic barriers.

"This guaranteed income program helps ease some of the financial burdens that all too often keep mothers from being able to prioritize their own health and ultimately impact the health of their babies and family," Breed said in a statement. "We hope the Abundant Birth Project serves as a model to address racial birth disparities throughout the region and state, and across the country."