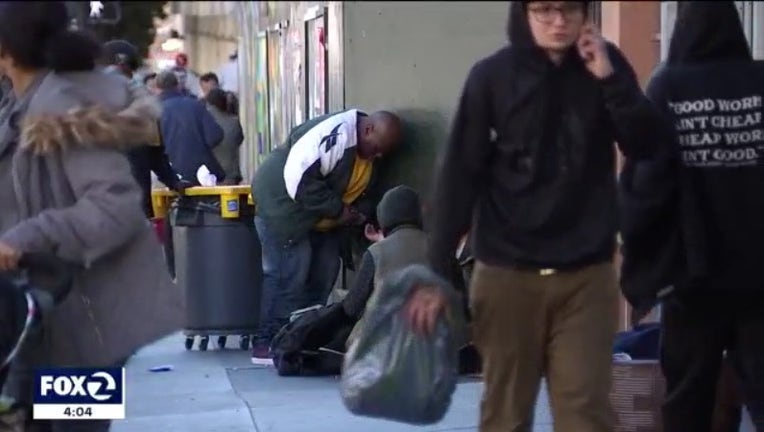 SAN FRANCISCO - San Francisco plans to try to thread a legislative needle to allow the opening of safe injection sites in the city.

Mayor London Breed and Supervisor Hillary Ronen announced Wednesday the expected introduction of a bill next week that, if enacted by the Board of Supervisors, would remove one hurdle to the opening of "Overdose Prevention Sites" in the city.

Such sites would allow individuals to use heavy drugs like heroin, methamphetamine and fentanyl in a safe and supervised environment where there would be access to wraparound services for addiction.

The new bill is necessary to remedy a problem the city inadvertently created in July 2020 when it passed a local ordinance that created a program to issue permits to operate safe injection sites.

In order to obtain a permit under the 2020 ordinance, an operator would need to offer a hygienic space, supervision by health care professionals, sterile consumption supplies, education about overdose prevention, and access or referrals to "substance use disorder treatment services, medical services, mental health services, and social services."

The problem arose from the fact that the ordinance provided that any permit issued by the city "shall not be operative and shall not authorize the operation of an Overdose Prevention Program unless and until state law authorizes the City to approve" the operation of such programs.

California law has not authorized cities to fund such sites.

At the time, there were no supervised injection sites operating in the United States, though such sites have operated in other countries, beginning with a site opened in Switzerland in 1986.

In December 2020, state Sen. Scott Wiener introduced a bill that would have allowed San Francisco, Oakland and Los Angeles to operate overdose prevention programs on a pilot basis. The bill passed the state Assembly and Senate, but Gov. Gavin Newsom vetoed the bill last August, stating that he was concerned about a lack of sufficient safeguards.

The veto essentially froze San Francisco in its tracks because the program was contingent on state authorization.

On the federal side, there were also developments.

In Philadelphia, a non-profit organization named Safehouse announced plans to operate a supervised injection site with the support of the city government.

In February 2019, before Safehouse had initiated operations, U.S. Attorney William McSwain of the Eastern District of Pennsylvania brought suit against the nonprofit, claiming that Section 856 of the U.S. Controlled Substances Act prevented operation of such a site.

Section 856, initially enacted to make operation of "crack houses" illegal, forbids any person from managing or controlling any place "for the purpose of unlawfully...using a controlled substance."

In October 2019, a federal judge in Philadelphia ruled against the prosecutors on the theory that Safehouse had shown that its overall purpose was "to reduce drug use, not facilitate it."

However, the U.S. Attorney appealed and on Jan. 12, 2021, a divided three-judge panel of the U.S. Court of Appeals for the 3rd Circuit reversed, in an opinion that began "Though the opioid crisis may call for innovative solutions, local innovations may not break federal law."

The panel found that Safehouse's proposed site would violate Section 856, ruling, "Because Safehouse knows and intends that its visitors will come with a significant purpose of doing drugs, its safe-injection site will break the law."

Jeff Cretan, a spokesperson for Mayor Breed, said the city is mindful of the challenges of implementing a city-funded site under current federal law. He said that the city is waiting for guidance from the federal government on that issue and if it is positive it "could potentially provide a path for how to do this with city funding."

In the meantime, he said, some local non-profit organizations want to follow the New York approach and open a safe injection site or sites with on private land with private funding.

According to Cretan, City Attorney David Chiu is supportive of that approach.

Chiu said in a statement, "The opioid epidemic continues to wreak havoc on our streets and claim the lives of far too many San Franciscans. To save lives, I have fully supported a non-profit moving forward with New York City's model of overdose prevention centers."

Beyond the federal law issues, the problem, according to Cretan, is that in setting up the permit scheme in 2020, the city ordinance provided that there could not be any safe injection sites in the city without receiving a permit. In light of that and Newsom's subsequent veto of state authorizing legislation, the city's 2020 ordinance would block a local nonprofit from following the New York approach.

The proposed ordinance is expected to be introduced at next Tuesday's board meeting.

The Mayor's Office was not willing to share a draft before that time, however, according to Cretan, the 2020 ordinance is "basically going to be repealed. There's going to be a giant strike through of that whole section."

The effect will be that a non-profit organization will be able to proceed as long as it uses private funding for the overdose prevention program and it isn't done on city land or with city personnel.

"The key thing is no city employee or city resources would be involved in the overdose prevention site," he said.

Cretan said the city hasn't given up on the federal approval.

"In an ideal world, the Department of Justice, the federal government, comes down with guidelines that allows also allows the city to do it, too...that would also open up a different, more direct path."