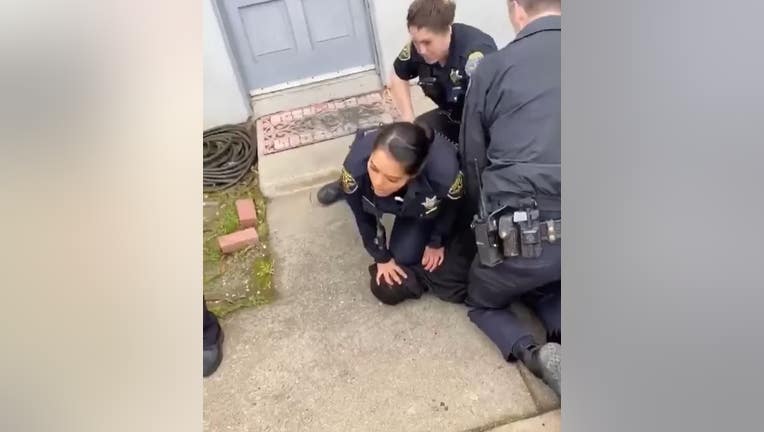 SAN FRANCISCO - After a video surfaced of a San Francisco police officer applying her knee to a 19-year-old's neck, Public Defender Mano Raju this week called for further police reforms including prohibiting officers to apply pressure to a person's neck when they're on the floor.

The video, filmed on Jan. 25 on Atoll Circle in the city's Hunters
Point neighborhood, shows Kajon Busby being pinned face-down to the ground by an officer.

The video was posted Friday on Facebook amid nationwide protests following the death of George Floyd in Minneapolis -- an unarmed black man who died when an officer used his knee to pin Floyd's neck to the ground.

According to Raju, after Busby's arrest, the officer misrepresented what happened in a police report, alleging the officer claimed
to only have put her knee on Busby's back.

"Police who abuse their power should not be wearing a badge. While oversight and early intervention is important, it means nothing if there is rarely any meaningful disciplinary action or change. A massive overhaul of our policing system is needed, and it must be driven by the wisdom of the communities most impacted by systemic abuse," Raju said in a statement.

Raju is calling on San Francisco police Chief Bill Scott and the
city's Police Commission to immediately issue a general order to forbid officers from applying pressure to a person's neck and head while the person is on the ground. The policy would fit with the department's other policies that forbid chokeholds and other potentially deadly forms of detention.

In addition, Raju is calling for any officer who uses a potentially deadly form of detention be punished with misconduct that could
lead to immediate termination.

Raju is also calling for the Police Commission to make reform
measures and discipline matters its top priority and that it requires the department to fulfill the remaining of the 272 reform recommendations provided by the U.S. Department of Justice back in 2016 in the wake of racist text messages and high-profile police shootings.

Furthermore, Raju wants to see investigations of officers accused
of violent or dishonest conduct to be completed faster and that the
department invest in community programs.

"I am heartened by Chief Scott's recent statement condemning the
police murder of George Floyd and by the Chief's desire to implement anti-bias measures. However, the current pace of reform is neither rooting out violence and racism in SFPD, nor protecting our community members equally, nor holding violent or dishonest police accountable. San Francisco deserves better," Raju said.'

Police on Saturday responded to the video, releasing the bodycam
footage from five officers at the scene, and said Busby was arrested on suspicion of making criminal threats and resisting an officer.

Since the video's release online, police said the department's
Internal Affairs Division is conducting an investigation into the arrest and the Training Division is also conducting a review of handcuffing techniques while a person is on the ground to see if changes are needed.

Additionally, the police's Special Investigations Division has
opened an investigation into threats being made against SFPD officers as a result of the case.

"It is clear from the attached video that Mano Raju's naked publicity grab to depict a San Francisco police officer in an unflattering light is not only wrong, but a sick attempt to take some sort of political advantage of the horrible death of George Floyd.  The video, from all angles, clearly shows an in-policy response to an individual that even Chesa Boudin, the criminal apologist himself, filed criminal charges against. Mr. Raju should take a hard look in the mirror and ask himself why he’s choosing to inflame tempers during this emotionally charged time.”