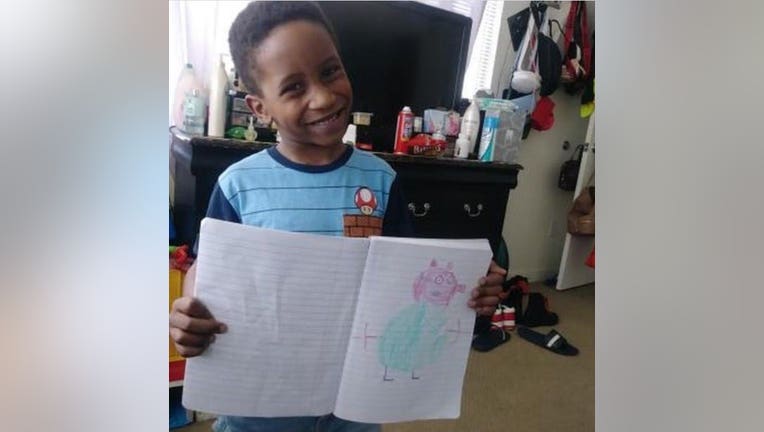 Jace Young would have started First grade in San Francisco on Monday. SFPD announced a reward in his shooting death from July 4.

SAN FRANCISCO - San Francisco police on Monday announced a $100,000 reward in a Fourth of July shooting in the city's Bayview neighborhood that killed a 6-year-old boy.

Police are hoping the reward will encourage someone to come
forward and reveal information about the July 4 shooting near Whitfield Court and La Salle Avenue that killed Jace Young, leading to the identity of the suspect or suspects and an arrest and conviction.

San Francisco police on Monday announced a $100,000 reward in a&nbsp;Fourth of July shooting in the city's Bayview neighborhood that killed a&nbsp;6-year-old boy.

"Jace was with his older sister, family and friends lighting off
fireworks in the celebration of Independence Day when this horrific incident happened," Police Chief Bill Scott said.

"We're just trying to get some awareness out about the senseless
tragedy involving my son on the Fourth," said Jason Young, Jace's father.

"If anybody anywhere knows anything about my son, please come
forward," Jace's mother Lakesha Kyle said. "I am so hurt. I am so at a loss for words, I don't even know what to say. All I want is help from somebody to bring people to justice, so we can bring justice for my son."

More than a month has passed since the shooting, which also
injured a man that night, but police still don't have a detailed description of the suspects or their vehicle.

Lead investigator Sgt. Timothy Kiely said he's certain there are
people in the community who have information but aren't speaking.

"We have gotten numerous surveillance video footage. We are reviewing and have been reviewing to help us track down these individuals," Kiely said. "He was senselessly gunned down in a very cowardly act and there's no other way to put it."

His family shared video of Jace on the day he graduated from kindergarten in May.

His mother says he was looking forward to first grade.

His heartbroken parents said Monday would have been his first day of school.

"He was so happy, so excited. He loved school. He loved to learn," said Kyle, "He was going to be a whole lot of things; an artist, an astronaut, a firefighter."

A memorial for Jace remains in front of his home. His mother says it is a reminder of the devastating loss.

She wears a necklace and bracelet bearing Jace's image. She said it's the only way she can hold her son close.

"I need what's right done for my son. my 6-year-old baby," said Kyle. "I'm wishing that you had a heart and come forward say something because he didn't deserve it."