Emergency crews responded to the scene of a multi-vehicle crash in downtown San Francisco Wednesday afternoon. Police say they pursued a vehicle following a report of shots fired connected to a "road rage" incident.

SAN FRANCISCO - Emergency crews are responding to the scene of a multi-vehicle crash in downtown San Francisco Wednesday afternoon. Police say they pursued a vehicle following a report of shots fired and a "road rage" incident.

The scene of the crash is at Market and Front streets. Police said there are no injuries.

Truck flips on its side in downtown San Francisco crash

Emergency crews are responding to the scene of a multi-vehicle crash in downtown San Francisco Wednesday afternoon.

Two people have been detained, police said. A spokesperson for SFPD said the incident began about two and a half miles away with a report of shots fired at Lombard and Laguna streets. Officers responded to that call at around 4:15 p.m.

Officer Kathryn Winters said the victim told police he had been involved in a road rage incident with another vehicle. Police said the other driver brandished and fired a gun before fleeing the scene.

Police said they located a vehicle matching the suspect description. They attempted to stop the vehicle, but the suspect allegedly fled. Winters said police pursued the vehicle and that the pursuit ended at Front and Market – the scene of the crash.

Two occupants of the suspect vehicle were detained. It is not clear where exactly the pursuit began.

The city's emergency alert notification system said to avoid the area of Market and Front streets at 4:31 p.m.

A white truck at the scene is flipped on its side. Another heavily-damaged white vehicle appears to have been involved. 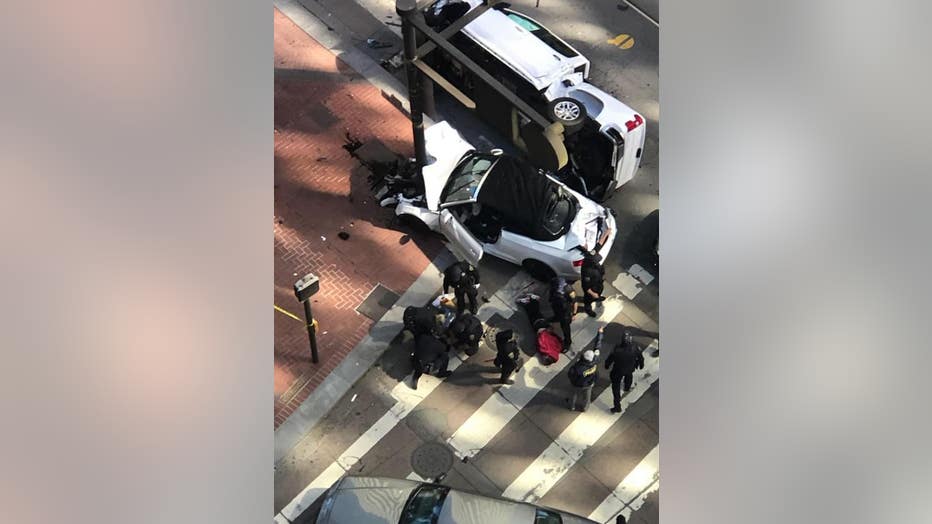 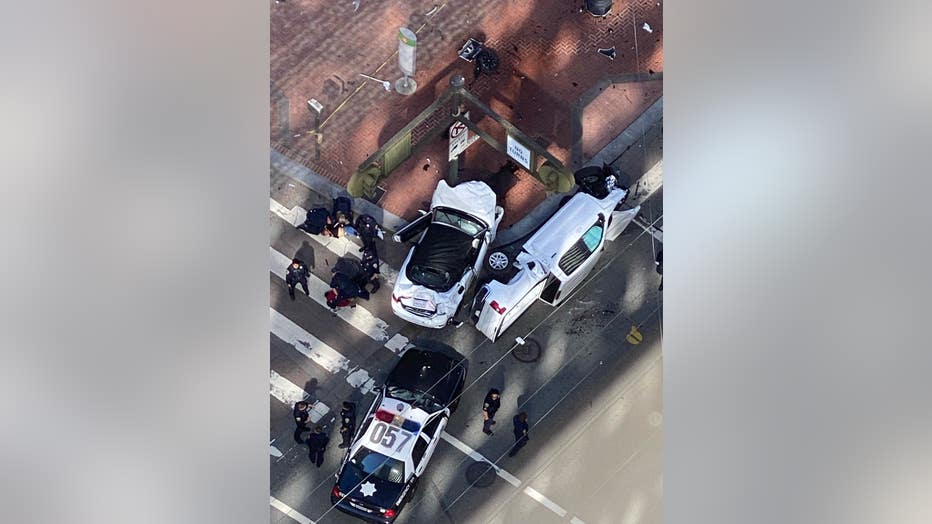 There is a heavy police presence in the area.

This is along part of a stretch on Market Street that does not allow private vehicles. Since 2020, Market Street only allows taxi cabs, public transportation, commercial and emergency vehicles from the eastbound direction from 10th to Main streets and westbound from Steuart Street to Van Ness Avenue.