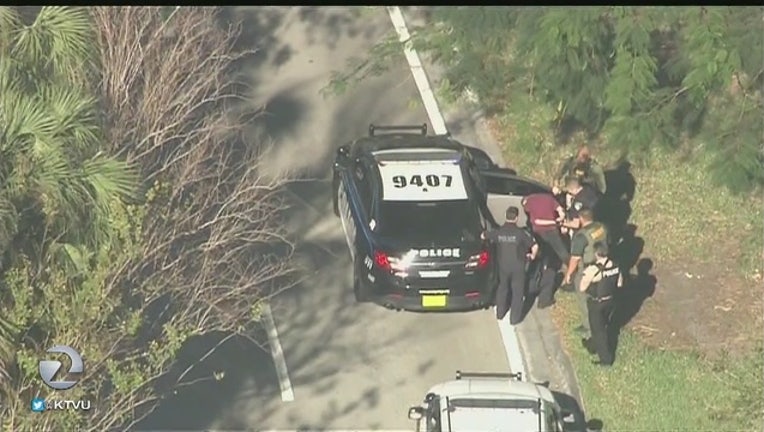 A Florida sheriff says the deputy who was on duty at a high school where 17 people were massacred waited outside the building for about four minutes without ever going in.

Israel said he made the decision after reviewing video surveillance and interviewing witnesses, including the deputy himself. The sheriff says Peterson responded to the building where the shooting took place, took up a position outside a door and never went in.

U.S. Sen. Marco Rubio says a visit to a Florida high school where 17 people were fatally shot has prompted him to change his stance on large capacity magazines.

Rubio visited Marjory Stoneman Douglas high school and a few days later met with its teachers. He said he was told that several people were able to escape because 19-year-old suspect Nikolas Cruz stopped and reloaded the rifle he used during the Feb. 14 attack.

The Florida Republican, who was challenged by survivors and family members during a contentious meeting broadcast on CNN on Wednesday, said this is "evidence in this case that it saved the lives of some people."

Rubio has been sharply criticized since the shooting because he has received support from groups like the National Rifle Association during his political career.

Hundreds have gathered to remember a 37-year-old assistant football coach and security guard gunned down while helping students to safety during a mass shooting at a Florida high school on Valentine's Day.

Aaron Feis was remembered Thursday as a loyal friend and a hero during an emotional funeral service that began with football players carrying the casket into the Church by the Glades in Coral Springs, not far from Marjory Stoneman Douglas High School in Parkland.

Joe LaGuardia, who attended high school with Feis at Stoneman Douglas, described him as "one of the greatest people I have ever known." He recalled hearing about the Feb. 14 shooting while preparing to go to an Ash Wednesday service.

He said, "I knew that Aaron would be running to save lives, I just knew it."

Former student Brandon Corona called Feis a "counselor to those who had no father figure."

The daughter of slain civil rights leader Martin Luther King says she stands in solidarity with the survivors of the Florida school shooting as they seek solutions to school violence.

Speaking Thursday at The King Center in Atlanta, the Rev. Bernice King said the Feb. 14 massacre of 17 people at Marjory Stoneman Douglas High School "gives us an opportunity to lay aside for a moment our differences and really look at how we can come together as humanity and move forward with these injustices and these evils that continue to beset us."

King commended the surviving students and said she plans to join and support them during the March for Our Lives in Washington next month and in other planned efforts.

King said that as the 50th anniversary of her father's assassination approaches, she hopes we can "look toward solutions as these young people are forcing us to have the conversations, bipartisan conversations."

Democratic U.S. Sen. Bill Nelson of Florida is giving fellow Sen. Marco Rubio credit for being the only Republican to attend a televised town hall meeting after the school shooting in their state.

He also criticized Republican Gov. Rick Scott for not showing up at the Wednesday meeting.

Nelson told a group of Democratic state senators on Thursday that Rubio "had the guts to be there when Governor Scott did not."

Scott is likely to challenge Nelson as he seeks a fourth term in the Senate this November. Nelson questioned Scott's commitment to make meaningful change after the shootings at Marjory Stoneman Douglas High School that left 17 dead.

For almost a half-hour after a school shooter dropped his assault-style rifle and escaped Marjory Stoneman Douglas High School, police officers thought they were seeing his actions live on the school's security system.

The 19-year-old suspect Nikolas Cruz was captured an hour later in a neighborhood about 2 miles (3 kilometers) from the school where 17 people died Feb. 14.

The newspaper reports police transmissions show that police initially couldn't get to security cameras. Sheriff Scott Israel said at a news conference he didn't know about the security system delays but would look into it.

The students who swarmed Florida's state capitol in the wake of the Marjory Stoneman Douglas High massacre want the Legislature to enact stricter limits on guns. What that might entail remains debatable -- if any changes are forthcoming at all.

The 100 Stoneman Douglas survivors who traveled 400 miles to Tallahassee were welcomed into the gun-friendly halls of power Wednesday, but the students' goal of a ban on assault-style rifles such as the weapon used in the shooting was taken off the table a day earlier.