OAKLAND, Calif. - The number of deputies, equipment and other resources that Alameda County sheriff's office used to remove a handful of homeless mothers from an Oakland home this week wasn't cheap.

Sheriff's spokesman Sgt. Ray Kelly told the Associated Press that department is considering billing the owner of the Magnolia Street home, Wedgewood, for the “tens of thousands of dollars” associated with enforcing Tuesday morning's eviction.

The moms, who weeks ago formed an ad hoc group called Moms 4 Housing, lost a court battle last week when Alameda County Superior Court Judge Patrick McKinney said they didn't have a valid claim to squat in the home, which they moved into without paying rent in November. The judge ordered an eviction within five days, something the sheriff's office is tasked with. In court, the women's' lawyers unsuccessfully argued that housing is a right and that the court must give the women the right to possess the house, especially because it sat vacant for so long and because the alternative would be to send the women to live on the streets. 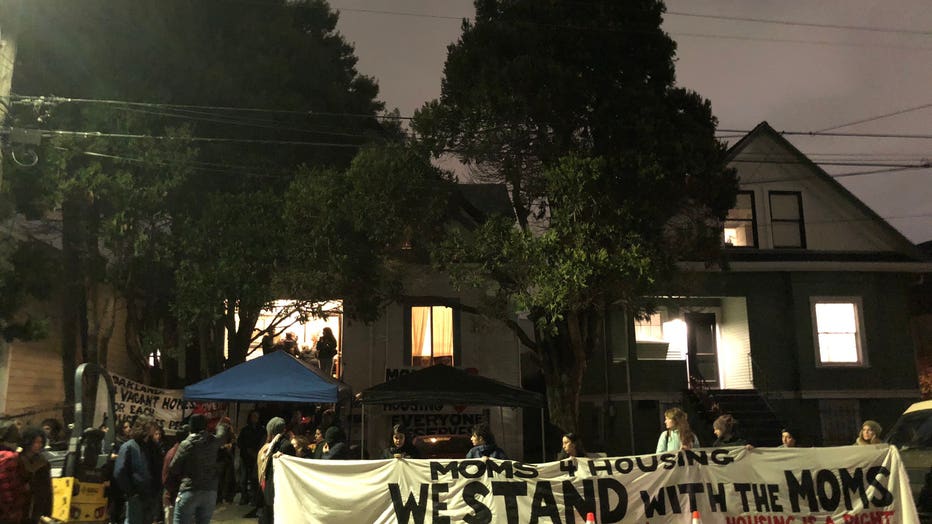 Kelly said that deputies had to use the battering ram to get into the house at 5:15 a.m. because the back and front doors had been fortified. He also told reporters that the dozens of tactical units and Bearcat armored vehicles had to be brought out in case "we had to do rescues of civilians in the home or officers."

Kelly added that the extra protection, including the use of AR-15s, was also for some "violent" protesters that deputies had spotted in the crowds of people outside the home who came to support the moms. He did not specify who these people were or how many of them were in the group.

“There was a tremendous amount of work that went into this and we had to think outside the box a little bit," Kelly said.

Kelly touted the operation as a success as there were only four peaceful arrests and no injuries.

Wedgewood spokesman Sam Singer told KTVU on Wednesday that he was "unaware" of Kelly's proposed bill.  Regarding the eviction, Singer said the company was pleased “the illegal occupation of its Oakland home has ended peacefully.” Wedgewood said it plans to work with the nonprofit group Shelter 37 to renovate the property with help from at-risk youth and will split profits from the home's sale with Shelter 37.

Many in the community resented the sheriff's tactics, saying they were overzealous and even racist, as all of the mothers are African-American.

“They came in like an Army for mothers and babies," the lead mother, Dominique Walker, said after the removal. Mayor Libby Schaaf said she was "shocked" at the sheriff's show of force.

A mother is taken away in handcuffs from a Magnolia Street home. Jan. 14, 2019

The women who were evicted moved into the three-bedroom house in November with their children, partly to protest the methods of speculators who they have claimed snap up distressed homes and leave them empty despite California's housing shortage.

They also wanted to highlight the plight of African Americans in the U.S. who were historically shut out of owning property and forced into substandard neighborhoods that are now popular with wealthier, and often whiter, residents.

African Americans are about a quarter of Oakland's population, but made up 70% of homeless counted.

While the mothers have had plenty of community support and help from longtime activists in The Town like Cat Brooks and Carole Fife, they had plenty of critics, too. Debbie Stevenson Peterson wrote on Facebook that it's not that anyone disputes the housing crisis, but entering illegally is "not the way you obtain housing. The fact that the mayor is supporting their tactics and blasting [law enforcement] is appalling."

After the eviction, deputies boarded up the house with plywood and said it is up to Oakland police to arrest anyone caught trespassing. The house did not contain many belongings, Kelly said, and Wedgewood is responsible for returning those belongings.

The home was empty on Wednesday morning. The women said that their fight isn't over, but they have not made their future plans public.

EDITOR'S NOTE: A previous version of this story incorrectly identified the type of rifles that the sheriff's office uses.

Furniture and belongings of the Moms 4 Housing home were placed outside on Magnolia Street in Oakland after the mothers were evicted. Jan. 15, 2020