LAKELAND, Fla. - Four people were killed, including an infant, and an 11-year-old girl was injured by a self-described survivalist on meth early Sunday morning, according to Polk County Sheriff Grady Judd.

According to Sheriff Judd, a woman called 911 around 7:30 p.m. on Saturday to report a suspicious man, who deputies say was 33-year-old Bryan Riley, in a vehicle. She said the man told her that "God sent me here to speak with one of your daughters."

She said she he wouldn't leave so she alerted a nearby man on a lawnmower. Riley told him that he was there to speak to Amber because she was going to commit suicide and he needed to save her. They told Riley that there wasn't anybody at the house named Amber and if he didn't leave, they were going to call the cops. They said Riley replied by saying they didn't need to call the cops because he is the "cops for God."

Deputies arrived within six minutes of the call, but the man and the vehicle were already gone.

Around 4:30 a.m. on Sunday, a lieutenant with the Polk County Sheriff’s Office was on another call when he heard two volleys of automatic gunfire about two miles away. At the same time, PCSO began getting 911 calls about reports of shots fired and began community-wide active shooter protocols.

As law enforcement approached the area, they saw a truck on fire and heard a popping noise. They saw a man, whom they say was Riley, dressed in camouflage, but did not see a gun at the time. Deputies say there was also a path made of glowsticks going from the road to the house. As law enforcement approached, the man ran into the house. That’s when officers and deputies heard another volley of gunfire followed by a woman screaming and a baby whimpering. 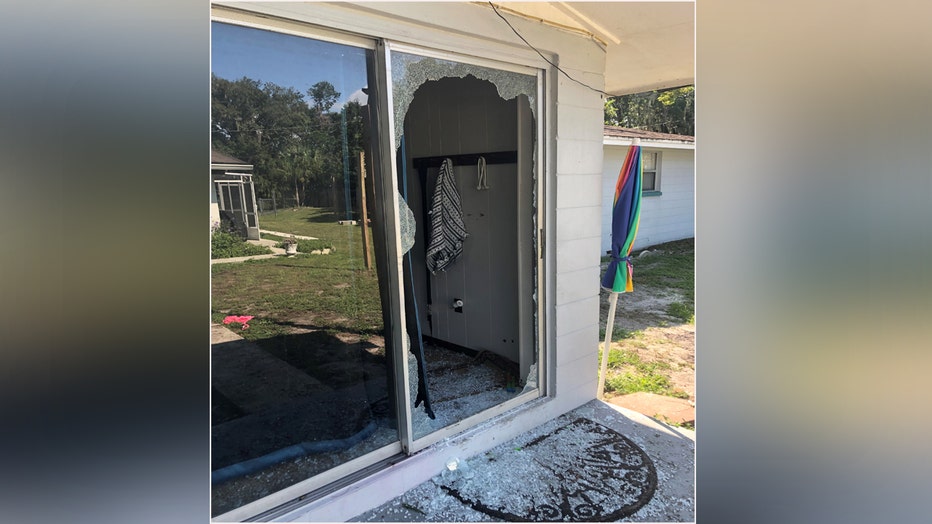 The lieutenant went to the back of the house where the suspect shot at him. The lieutenant returned fire and got away from the house. That's when the suspect starting shooting at deputies and officers with the Lakeland Police Department. Law enforcement officers returned fire and at least one bullet struck Riley, who had put on a bulletproof vest.

A PCSO helicopter was up and they saw Riley come out of the house with his hands raised. He was taken into custody and then to Lakeland Regional Hospital to be treated for a gunshot wound.

According to Judd, while at the hospital, the suspect jumped up and tried to steal a gun from a Lakeland police officer, but was unsuccessful and subdued.

Law enforcement officers found the bodies of 40-year-old Justice Gleason,  a 33-year-old woman, and a 3-month-old baby, who was in the woman’s arms dead inside the home. In another residence on the property, they also found the body of a 62-year-old woman. Law enforcement officers were searching for a 10-year-old girl, who is the sister to the 11-year-old, after the shooting, but she was safely located at a relative's home on Sunday morning. 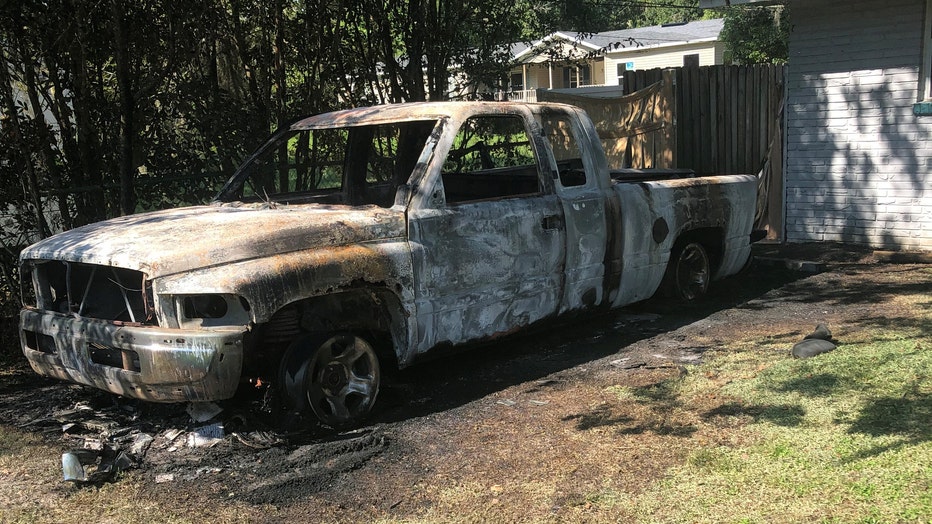 Sheriff Judd said, "I will never be able to unsee that mother with that infant laying deceased in her arms as she lay dead."

Law enforcement officers also found the family dog shot to death in the home. Sheriff Judd said the dog was named Diogi after the PCSO K-9 that was killed in the line of duty in 2005.

According to Sheriff Judd, Riley told detectives, "they begged for their lives and I killed them anyway." Judd added, "He is evil in the flesh. He is a rabid animal."

Judd says law enforcement was worried about booby traps when they entered the home and they found blood-stop kits and first-aid kits inside the suspect’s truck. He says the suspect "was ready for battle."

Judd said, "He came out with his hands up and that's why there was no more gunfire. It would be nice if he had come out with a gun and then we would have been able to read a newspaper through him and we'd be having a different conversation right now. But, when someone gives up we take them into custody peacefully. If he had given us the opportunity, we'd have shot him up a lot. But, he didn't because he's a coward. It's easy to shoot innocent children and babies and people in the middle of the night when you've got a gun, but he's not much of a man." 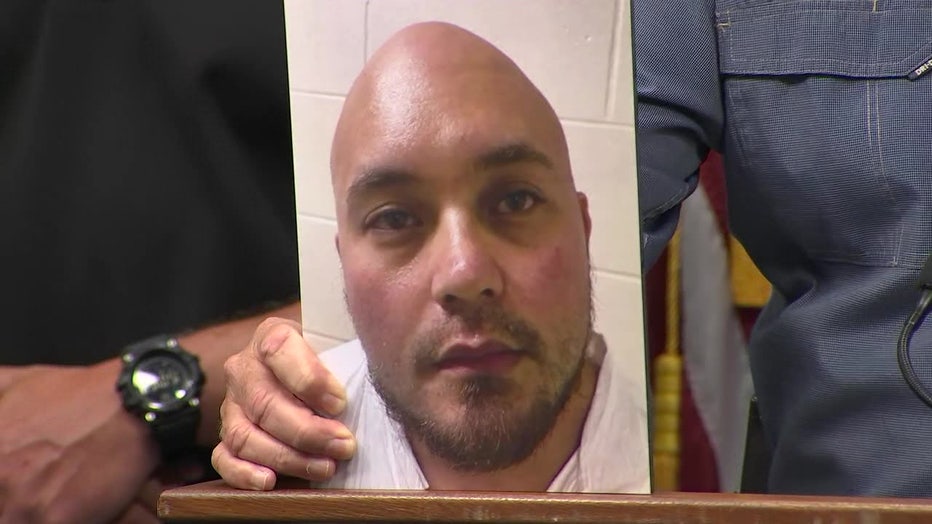 Sheriff Judd says law enforcement officers have found no connection between Riley and the victims. He said Riley is a former Marine from Brandon who was a designated sharpshooter in the military. According to Judd, Riley was honorable discharged from the Marines after four years of service and then signed up for the reserves. Riley was employed with ESS Global Corporation as a security guard. He says Riley had no criminal history until now.

"This is God’s country here. The crime rate in this county is at a 49-year low. Crime’s never been this low, but when you get a nutjob like this, statistical data makes no difference. This guy was on dope, on meth, what ‘those people’ think is low-level, non-violent meth- there’s your sign," Sheriff Judd stated.

Judd added that Riley's girlfriend, who is cooperating with the investigation, says Riley suffered from PTSD and depression, but was not violent until now. She said Riley went to Orlando last weekend to do security at a church and when he came back he said he could talk to God.

According to the girlfriend, Riley told her that God spoke to him about helping victims of Hurricane Ida. She said he went out and bought a lot of supplies, but was acting erratic and purchased $1,000 worth of cigars for Hurricane Ida victims. 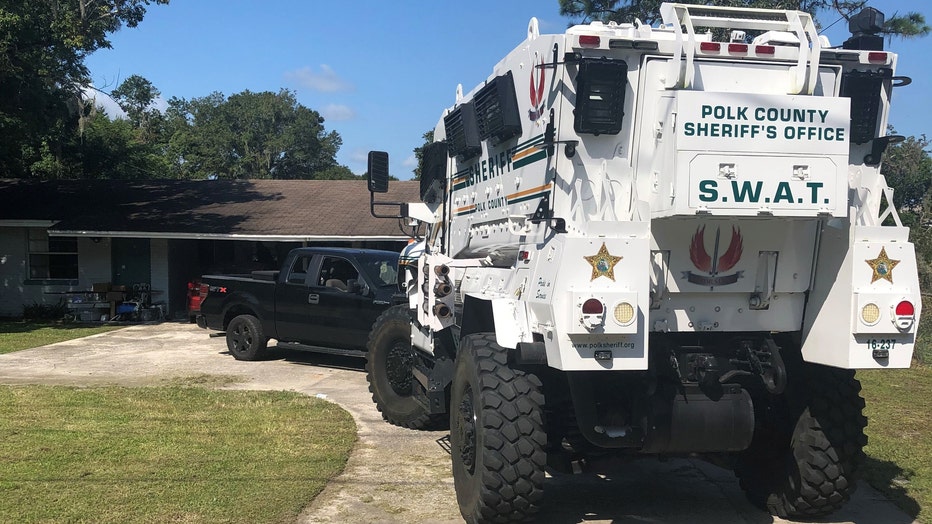 On Saturday, she said he came home and said he saw a man on a lawnmower and his daughter was going to kill herself and he needed to save her. The girlfriend told him that he cannot talk to God and he replied with, "there's no room for doubters in my life." She said it was the first fight they got into like that and he retreated to his ‘mancave’ and she went to bed. When she woke up around 6:30 a.m. on Sunday, he was gone. She turned on his GPS and his location was North Socrum Loop Road in Polk County. Then she began to hear media reports about a shooting on that street. Sheriff Judd says she contacted Riley's parents and then spoke with deputies.

Sheriff Judd said Riley was playing games with detectives when they were questioning him. According to Sheriff Judd, Riley told the detectives that he was a survivalist and he was on meth.

Riley has been treated and released from the hospital and is currently in custody.