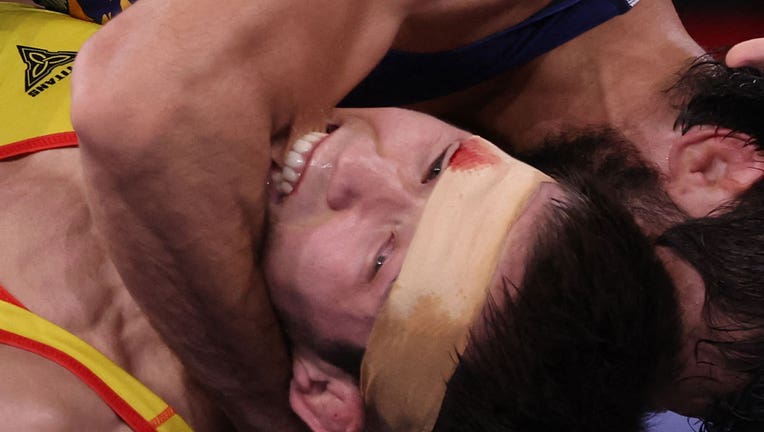 Kazakhstan's Nurislam Sanayev bites India's Kumar Ravi as he wrestles him in their men's freestyle 57kg wrestling semi-final match during the Tokyo 2020 Olympic Games on August 4, 2021. (Photo by JACK GUEZ/AFP via Getty Images)

A wrestler from Kazakhstan was caught on camera biting another wrestler during an Olympic wrestling competition.

Nurislam Sanayev was in a Tokyo 2020 Olympic 57-kilogram freestyle semi-final match against India's Ravi Kumar on August 4, 2021, at the Makuhari Messe in Tokyo when he put his teeth to work.  Photos showed him biting Kumar on his arm.

It didn't help.  Kumar went on to win the match to head to the gold medal match.  He was left with a huge teeth mark on his bicep after the match.

The bite was noted by angry fans back in Inda.

Kumar was defeated by the Russian Olympic Committee’s Zavur Uguev 7-4 in the finals.  Kumar was trying to become India’s first Olympic gold medalist in the sport but did take home the silver medal.

Sanayev went on to win the bronze. He defeated Bulgaria’s Georgi Vangelov 5-1.