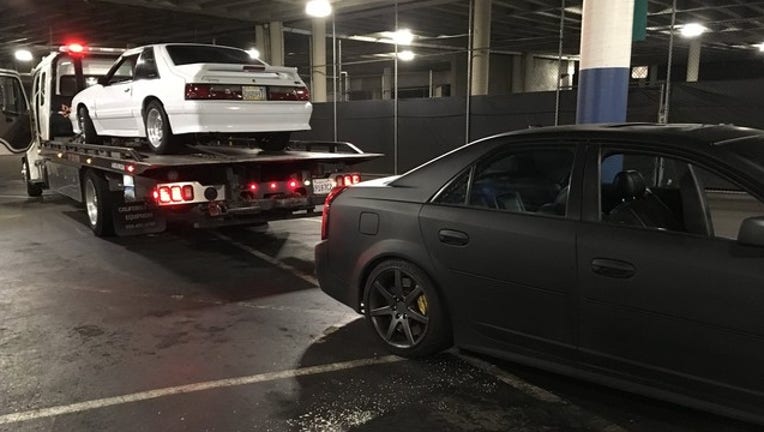 OAKLAND, Calif. (BCN/KTVU) - Oakland police will have extra officers on duty through Monday night paying special attention to breaking up and warding off dangerous "sideshow" gatherings of rubber-burning cars and those who enjoy watching them.

Through Sunday afternoon, Oakland police had arrested one person, issued 10 citations and impounded four cars involved in sideshows very early Sunday morning, centered in the area of 42nd Avenue and Interstate Highway 880, a locale sometimes referred to as "the pit."

About 100 cars were gathered there and then split up into several smaller gatherings in the area, Oakland police Officer Johnna Watson said.

Those four vehicles, Watson said, will be impounded for 30 days.

"It will cost a couple of thousand dollars to get these cars out of 30-day hold," Watson said.

Joining the OPD for this weekend's sideshow enforcement have been the California Highway Patrol and the Alameda County Sheriff's Office.

The CHP lent a helicopter to the effort.

"We are able to quickly disrupt (the sideshows) by sending units to key locations in the city," Watson said.

The Oakland enforcement efforts have picked up since April 14, when sideshow participants at 42nd Avenue and International Boulevard set both a truck and a bus on fire.

"A lot of resources go to illegal sideshow enforcement - resources that could be used for other things," Watson said.

The idea, Watson said, is to help drive sideshows out of town.

"A majority of these people come from outside the City of Oakland to start illegal sideshows."

And they've become a regional issue, she said, with recent events in Vallejo, Richmond and unincorporated Martinez.