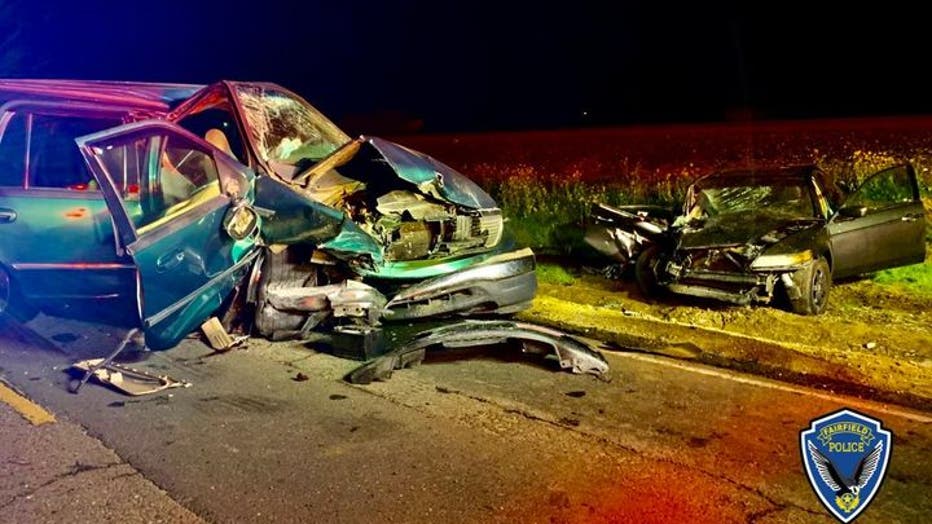 Shortly before 10:30 p.m., a large group involved in sideshow activities was making its way toward Fairfield on Vanden Road, where police said 23-year-old Christian Placencia, driving at a high rate of speed, tried to pass another vehicle and ended up slamming head-on into a car unrelated to the group and going the other direction.

Police said a female passenger in Placencia's car had to be extracted and was transported to a hospital with major injuries. Placencia and the victim in the other vehicle went to the hospital with moderate injuries.

Prior to the crash, officers were out in force, working with neighboring agencies to monitor areas that have been known gathering spots for sideshows.

"Officers responded by moving large groups of vehicles out of parking lots and encouraging them to get back on the freeway," police said.

Investigators said a group moved out of Fairfield and then gathered at a location in Vacaville, before traveling southeast to another spot in unincorporated Solano County. The group was returning to Fairfield, when the head-on occurred.

The crash prompted the closure of Vanden Road for several hours. But police said it did not stop people from continuing to take part in Saturday night’s sideshows, which at one point led to a violent confrontation with law enforcement officers.

"Despite the collision, the group continued to drive onto Walters towards Highway 12 through Suisun," police said.

Ultimately a group of several hundred people shut down Pennsylvania Avenue at Highway 12. Police said officers staged in the area and the Highway Patrol moved in to help break up the crowd, which then began throwing objects at officers and pointing lasers at them to obstruct their vision.

Eventually, the crowd dispersed, and police said the motorists moved out of Fairfield to participate in sideshows in other parts of the Bay Area.

Fairfield police called the activities that led to the crash "senseless acts and disregard for human life," and they had a warning for those who chose to participate in such dangerous events: "Sideshows have no place in our community, and Fairfield Police Department will continue to work with Bay Area Law Enforcement to deter and shut down such events."

Placencia faces charges including a felony for reckless driving causing injury, police said. Investigators urged anyone with information about the weekend’s sideshows to contact the Fairfield Police Department.