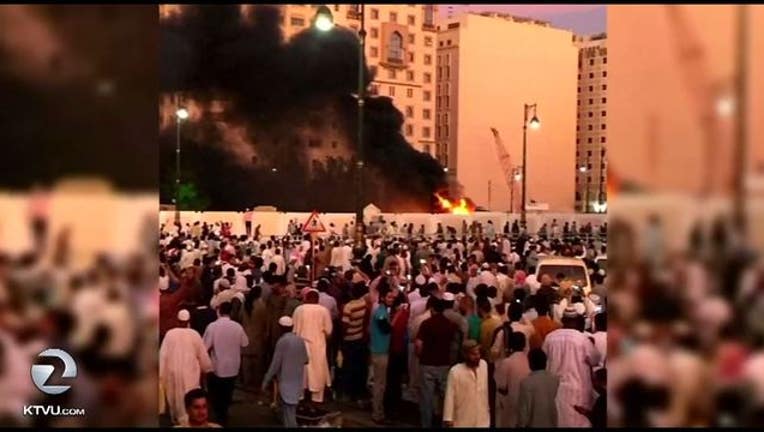 The first attack happened just outside the U.S. Consulate in Jeddah, another at a Shiite mosque in the eastern city of Qatif, and a third explosion happened in Medina at one of Islam's holiest sites.

The bomb attack in Medina brought death and violence to a place of peace and prayer. The suicide bomber detonated explosives in a parking lot near the mosque where the Prophet Muhammad is buried. Thousands of worshippers were there for sunset prayers as the holy month of Ramadan comes to a close Tuesday.

In Silicon Valley, at the Muslim Community Association in Santa Clara, Sara Abdelrahman said her brother had been in Medina a few days ago.

"He was just there, yeah, so it could have happened to anyone you know. Like, you don't know who could be there at any time," said Abdelrahman.

She and other Bay Area Muslims say they're angered by the recent terror attacks.

At another Muslim center, Rali Abdullah of Castro Valley said she was heartbroken to see the news.

"It's an international place for prayer. I have friends who are there right now, so I tried to you know, contact them but I haven't been able to. Everybody goes there to Medina. That's the most peaceful place," Abdullah said.

Earlier in the day, near the U.S. Consulate in Jeddah, a suicide bomber wounded two security guards. Saudi officials say the bomber was a resident from Pakistan. The Interior Ministry said security forces found six explosive devices at the scene.

Several hours later, a car bomb exploded near a Shiite mosque in Qatif, an area populated by the kingdom's Shiite minority. Saudi officials said they found remains of three bodies, possibly belonging to the attackers.

In a statement, U.S. Ambassador Joseph Westphal wrote, "I condemn, and all decent people condemn, these attacks.  All of us deserve the right to worship in peace, and those who would transform this holy time into an occasion for hatred and bloodshed deserve our strongest condemnation."

The bombings are the latest in a string of attacks during the last week of Ramadan that has seen violence ripple through the Muslim world.

On Monday, a vigil in Iraq was held for victims of the Sunday July 3rd truck bombing in Baghdad that killed at least 157 people and wounded nearly 200 others.

That followed Friday's July 1st attack in Bangladesh, where gunmen killed 2 police officers and 20 foreigners at a Dhaka restaurant. Five of the gunmen died, one was captured after government forces launched a counterattack to rescue the hostages inside. The attack is being linked to a local extremist group with ISIS ties.

At the South Bay Islamic Association center in San Jose Monday night, there were prayers for peace and unity on this July Fourth.

"We are thankful to God for the independence that our country achieved on the Fourth of July, but at the same time we pray that we get independence from those perpetrators," said Najib Azhar, a former SBIA board member.

"We must persevere all of us, Muslims and non-Muslims alike, that we must see that these perpetrators do not put a wedge between us," Azhar said.

No one has claimed responsibility for Monday's attacks in Saudi Arabia. Saudi officials are investigating whether the attacks were coordinated.