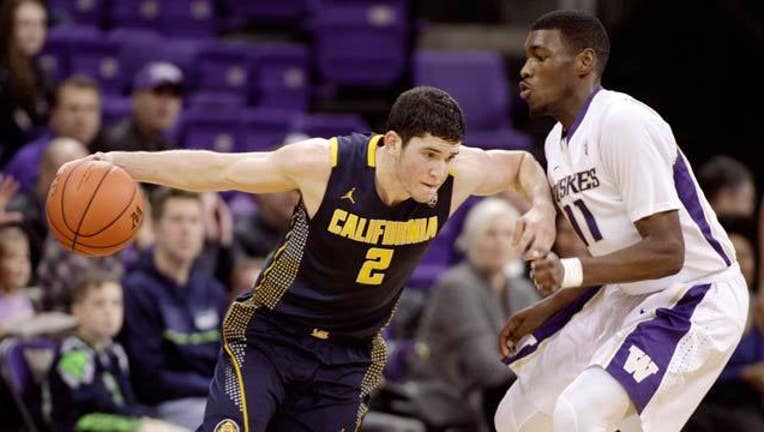 SEATTLE (AP) — Sam Singer was originally looking to drive, but a jab step created space and the sophomore let the ball fly from the top of the key.

He knew right away the ball was going in the hoop.

Singer hit a 3-pointer with five seconds left to lift California to a 90-88 win over Washington on Sunday.

"I was in a little bit of a slump, pretty much this whole year," Singer said. "But I kept working, put my head down, kept getting shots up in the morning, after practice, stuff like that. It feels great to have it all pay off and finally hit a three, especially the time that I hit it."

During a timeout prior to the game-winning shot, the Bears had called a play in preparation to face a man defense. When the Huskies came out in a 2-3 zone, California stuck with its original call. Singer caught the ball at the top and originally was going to drive to the hoop, thinking defender Andrew Andrews was going to jump into him hard. When his jab step created space, Singer took the shot he is known for around the California program.

Singer's shot came after Nigel Williams-Goss gave Washington an 88-87 lead, its first since early in the first half, with a short jumper at 19.5 seconds.

California, led by Mathews' 23 points and Tyrone Wallace's 21, had fended off the Huskies for most of the second half. Washington tied the game on four occasions before Williams-Goss' jumper.

The Huskies closed to within 87-86 with 1:18 left and forced Mathews to miss an off-balance jumper, but Mike Anderson immediately turned the ball over. Wallace was fouled on the ensuing inbounds, but missed the front end of a one-and-one, giving Williams-Goss, who had a game-high 31 points, the chance to put the Huskies in front.

But Singer hit the 3-pointer and Williams-Goss was well off the mark with a long jumper at the buzzer.

"Any time you lose on a game-winning shot it's tough, but we know that the game didn't come down to that shot," Williams-Goss said. "They shot 60 percent in the game. If we play better defense and keep guys in front of us, we're not even in that position. It's unfortunate that he hit the shot, but more than that we got to look at ourselves and say what we could have done in the first 39 minutes to not get to that point."

With just eight healthy scholarship players after the dismissal of Robert Upshaw from the team earlier this week, the Huskies again used a seven-man rotation. As it did in a loss to Stanford earlier in the week, Washington sorely missed the nation's leading shot-blocker, playing just two forwards - Shawn Kemp Jr. and true freshman Donaven Dorsey.

The Huskies went to a five-guard lineup on several occasions, one which California took advantage of by using 6 foot 10 David Kravish in the post. Kravish scored four straight points and commanded heavy attention as part of a first-half California run which gave the Bears a 13-point lead.

"I just thought Dave did a great job of really keeping us sound and making those guys respect us on our drives on the perimeter," California coach Cuonzo Martin said.

Kemp did a good job controlling the paint when he was in the game, and added two monstrous second-half dunks, as the Huskies looked to get him the ball in the post. But Kemp wasn't much help on the glass, and finished with just two rebounds in 23 minutes.

Washington: The Huskies shot 53.2 percent, hit eight 3s and only had seven turnovers but were outrebounded 38-22.

California appeared to have gained control of the game with a 40-27 lead with just less than three minutes left in the first half. The Huskies ended the first half on a 14-3 run, though, capped by a corner 3-pointer from Williams-Goss as time expired.

The run was keyed by consecutive 3-pointers from Darin Johnson, who had been reluctant to shoot from the outside. The Bears responded by having Johnson's defender sag to the middle, congesting the lane.

With a noon start and the hometown Seattle Seahawks playing in the Super Bowl, a sparse crowd was on hand at Alaska Airlines Arena. Even with Washington offering free admission to students wearing Seahawks gear, the student section was barely half full.

California: The Bears return home to host USC on Thursday.

Washington: The Huskies are at Oregon on Wednesday.