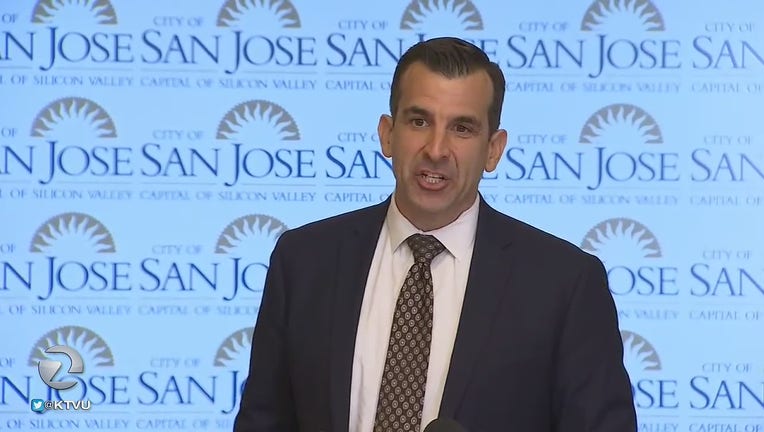 SAN JOSE, Calif. - After a month of pressure and community outcry, Mayor Sam Liccardo on Monday quietly dropped his push for a "strong mayor" initiative that would extend his term by two years and increase his powers.

In a memo released Monday -- a day before the San Jose City Council was set to vote on the controversial plan -- Liccardo proposed creating a charter review commission to consider changes and instead pursue a November ballot measure that would only move mayoral elections to presidential years. The plan would no longer extend his term to 2024 or increase his powers.

"In recent weeks, several organizations have urged that we slow the process of charter reforms designed to lead to a more effective, accountable, and representative government," Liccardo wrote in the memo.

"Given what has become a highly contentious political environment surrounding these efforts -- they're right. We need to slow this down, to enable more outreach and community engagement."

The original plan, which drew the ire of five of Liccardo's council colleagues and dozens of community leaders, would've awarded him two more years in office and allowed him more powers, including hiring and firing the city manager and department heads. It was narrowly approved in a 6-5 vote by the City Council after nine hours of debate starting on June 30.

The City Council planned to hash out the measure's language on Tuesday in another high-stakes showdown.

Now, Liccardo suggests returning to the City Council in spring 2022 -- his last year in office -- to pursue a November 2022 ballot measure that would "align mayoral authority" with the residents' expectations for a major city.

He did not outline what additional powers the mayor should have, and instead, appears to leave that decision in the hands of the public in 2022.

"At the end of the day, our city belongs to its residents," Liccardo wrote. "I believe now as much as ever that our residents deserve to have the power to hold their government accountable. Let's move forward together in 2022 with long-overdue reforms."

Liccardo said the controversial strong mayor measure was meant to be a compromise after an initiative from labor leaders -- called the Fair Elections Initiative -- failed to gather enough signatures. That measure, however, had no language about increasing Liccardo's powers or extending his term. At the time, Liccardo opposed that measure.

The plan fell apart after city unions and five prominent councilmembers -- Magdalena Carrasco, Sergio Jimenez, Sylvia Arenas, Raul Peralez and Maya Esparza -- opposed the mayor's push to increase his authority and extend his term. They claimed the measure was an unvetted power grab by Liccardo and criticized him for failing to do any community outreach on the plan.

"Since I first issued a memorandum in response to this hastily done deal, I have said we should be slowing down and utilizing the Charter Revision Commission," Peralez said. "This should have been the mayor's direction after hours of opposition back on July 1, but thanks to continued pressure from many community members and organizations, I'm certainly pleased with the opportunity we'll have in front of us tomorrow."

Peralez called the original measure politics at its worst in an op-ed for this news organization.

"I am happy to hear that Mayor Liccardo is reconsidering the strong mayor initiative," Carrasco told San JosT Spotlight. "It was a very bad idea from day one because it was a backroom deal and more importantly because of the negative consequences on our most vulnerable communities."

Carrasco said the five Latino councilmembers pushed hard to make sure their voices were heard.

"Pulling this from the ballot to have more community input is a good first step," she said. "We look forward to working with the mayor to make a better San Jose that's just and equitable and ensures that the political status quo respects the rich historic diversity of our city."

Terry Christensen, a political science professor at San Jose State University, is in favor of a strong mayor system "in theory," but said the council shouldn't make a decision based on what's best for other cities and should think carefully about San Jose's specific needs.

"Most big cities do have a strong mayor, because they need that kind of leadership to deal with the complex problems that they have," Christensen said. "That's what Liccardo was talking about when he first began advocating for this. He feels like he's in a position where a lot is expected of him. But he doesn't actually have the authority to be the kind of leader that people want."

Christensen noted that Liccardo's power under the current system makes him a mere "exalted member of the council."

"Maybe we need more than that," he said. But for now, Christensen supports Liccardo's decision to give strong mayor talks room to breathe. "I think they were rushing, pushing it through too fast and that it really is something that the community should have time to contemplate in some depth," he said.

City union leaders who opposed the strong mayor initiative said they support the changes unveiled by Liccardo on Monday.

Mason said that if the City Council tries to expand the mayor's powers, they should consult with the community first.

"That's what we've asked for in the very beginning, was a study, like any other major charter change, and that we will then see what the community and the other stakeholders think about additional powers," Mason said. "I think it's too early to say what our position would be because we don't know what the community is going to say, all we know is the community did not want this at this time."

Although some unions, such as the San Jose Police Officers' Association and the Mechanical, Electrical, Plumbing and Sprinkler Fitters trade unions, supported the initiative -- creating a rift in the labor camp -- Mason said this was a step toward gaining consensus among labor in San Jose.

"We're a family in labor and sometimes families have fights," Mason said. "Sometimes they become more public than we like but there's always a way to find a way back to the dinner table and to break bread together and I'm confident that will happen in this case."