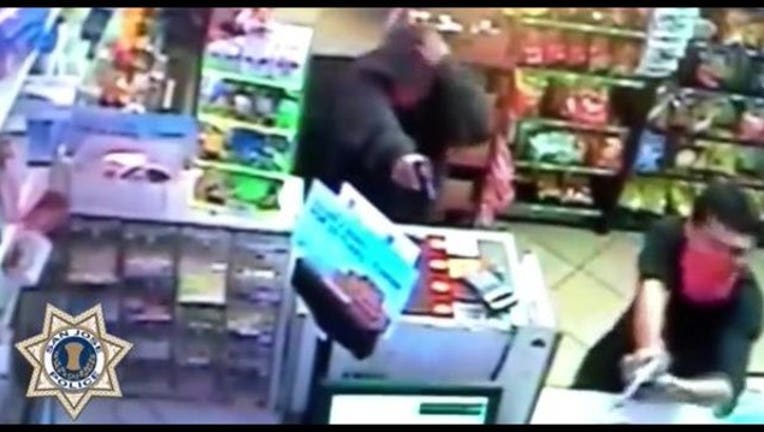 SAN JOSE, Calif. - The San Jose Police Department is asking for the public's assistance in identifying and locating the two robbery suspects shown in the video.

Police say one man assaulted the clerk and demanded money. Another man then shot the clerk causing a non-life threatening injury. Both men fled and were last seen running southbound from the store.

The first suspect is described as a Hispanic man, 16-25 years old, approximately 5'11", 140 lbs, wearing a black shirt, blue jeans, black/white shoes, with a red bandana covering his face, and carrying a handgun. He possibly has an unknown tattoo on his right forearm.

The second suspect is described as a Hispanic man, 16-25 years old, approximately 5'11", 160 lbs, wearing a gray hooded jacket, tan pants, black/white shoes, with a red bandana covering his face, and carrying a handgun.

Anyone with information regarding this incident is urged to contact Detective Mike White #4104 of the San Jose Police Department's Robbery Unit at (408)277-4166.

People wishing to remain anonymous can call the Crime Stoppers Tip Line, (408) 947-STOP (7867), or click the "Submit a Tip" link below. Anyone providing information leading to the arrest and conviction of the suspect may be eligible for a cash reward from the Silicon Valley Crime Stoppers.