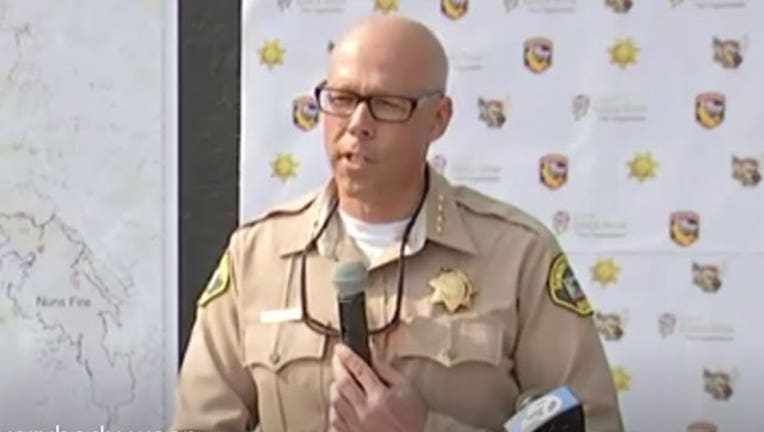 SANTA ROSA (BCN)-- Sonoma County Sheriff Rob Giordano today challenged implications that a Sonoma Valley man who was arrested for arson over the weekend could be responsible for some of the fires that have been burning in the North Bay since Oct. 8.

Giordano responded to a press release issued Wednesday by Thomas Homan, the Acting Director of the federal Immigration and Customs Enforcement about Jesus Fabian Gonzalez.

Giordano said the press release was "inaccurate, inflammatory and damages the relationship we have with our community."

On Sunday, the sheriff's office arrested Gonzalez, 48, for felony arson, which occurred at Maxwell Farms Regional Park in the Sonoma Valley where Gonzales was sleeping, Giordano said. Deputies recognized Gonzalez who told the deputies he lit the fire to keep warm.

He was arraigned Wednesday in jail and his next court date has not been set. The Sonoma County Superior Court is closed until Monday because of the fires.

ICE sent a request on Oct. 16 to detain Gonzalez for 48 hours past his scheduled release date from the jail, but the detainer was not signed by a judge and the sheriff's office could not legally honor it, Giordano said.

"ICE has the ability to obtain a warrant for anyone they are interested in like we do everyday in this county. If ICE obtains a warrant I can legally hold the person and would be happy to do so," Giordano said.

Gonzalez will remain in the Sonoma County Jail until his arson case is adjudicated and Ventura County will then prosecute Gonzalez, Giordano said.

In his press release, ICE Acting Director Homan said, "Once again, a non-cooperative jurisdiction has left their community vulnerable to dangerous individuals and preventable crimes."

"The residents of Sonoma County, and the state of California deserve better than policies that expose them to avoidable dangers," Homan said.

"Non-cooperation policies - now enshrined in California state law - ensure only one thing: criminals who would otherwise be deported will be released and left free to re-offend as they please," Homan said.

While Homan did not specifically say Gonzalez is suspected of starting any fires in the Bay Area, as reported in some media, he said the sheriff's office's action "is especially troubling in light of the massive wildfires already devastating the region."

Giordano said Cal Fire is investigating the cause of the Tubbs Fire, which has caused 23 deaths in Sonoma County, and other fires in the North Bay.

"There is no indication that Gonzalez had anything to do with these fires and it appears highly unlikely," Giordano said.

"ICE attacked the Sheriff's Office in the midst of the largest natural disaster this county has even experienced," Giordano said in his press release.

"ICE's misleading statement stirs fear in some of our community members who are already exhausted and scared," Giordano said.

The Sheriff said he will work with ICE cooperatively and within the sheriff's office's policy and the law.

"Despite ICE's misleading statement, we will continue to protect and serve our community members with the strength and compassion they deserve. I hope to end this senseless public confrontation with these facts
so that I may focus on the fire recovery," Giordano said.