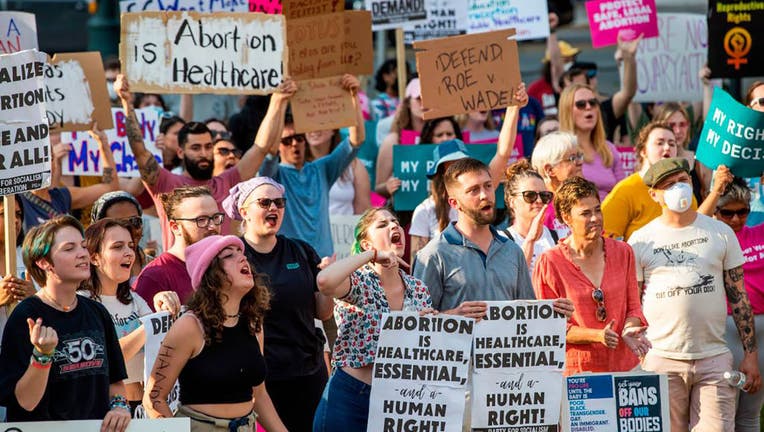 Protesters show their support for legal abortion at the South Carolina Statehouse in Columbia on May 2, 2022. (Joshua Boucher/The State/Tribune News Service via Getty Images)

COLUMBIA, S.C. (AP) - A South Carolina Senate committee voted Tuesday to remove exceptions for rape and incest from a proposed abortion ban setting up a showdown among Republicans wary of passing such a restrictive bill.

Democrats helped set up the fight, choosing not to vote with three moderate Republicans who wanted to keep the exceptions in the bill.

The same bill without the exceptions appeared to fail in the more conservative state House last week before some Republicans maneuvered through a series of votes to allow abortions for rape and incest victims up to the 12th week of pregnancy.

The Senate Medical Affairs Committee vote 9-8 with two Republicans joining all Democrats — to send the bill to the full Senate, where debate is expected to begin Wednesday morning. The exceptions could be restored during that debate.

Democrats also refused to vote on other proposals by Republican Sen. Tom Davis, who has said for weeks the bill needs to be modified from a total ban before he can support it.

They included increasing access to contraceptives and including birth control as part of the state's abstinence-based sex education as well as assuring that a doctor can perform the abortion if it is determined a fetus has a medical condition that won't allow it to live outside the womb.

Democrats are not going to help Republicans out of a box of their own making by making "an awful bill a very bad bill," Senate Minority Leader Brad Hutto said.

"We think by highlighting the fact a bunch of extreme, Republican men are trying to control women’s decisions in South Carolina — they need to own that. The governor needs to own that," Hutto told reporters.

Republicans told their Democratic colleagues their strategy was shortsighted.

"We heard a lot of talk about protecting women's rights. It looks like when they had a chance, they didn't," Republican Sen. Michael Gambrel said.

Several Republicans senators have said they cannot support the bill without the exceptions for pregnancies caused by rape and incest. There are 30 Republicans and 16 Democrats in the state Senate.

Senators will get another chance to change the bill Wednesday, including adding the exceptions back or any amendments that were rejected at Tuesday's meeting.

Indiana Gov. Eric Holcomb announced that he had signed Senate Bill 1 within an hour of its passage in the state legislation. The bill outlaws abortions almost entirely in the state of Indiana with some exceptions. The Indiana Senate voted 28-19 to accept Senate Bill 1 after the bill passed the House earlier in the day – making the legislature the first in the nation pass such restrictions since the U.S. Supreme Court opened the door by overturning Roe v. Wade.

The bill bans all abortions in South Carolina except when the mother’s life is at risk. Before they were removed, the bill also included exceptions for pregnancies caused by rape and incest. In those cases, the doctor would have to tell the woman the rape will be reported and her name given to the county sheriff within 24 hours of the procedure. The bill would have only allowed abortions in those cases up to 12 weeks after conception.

The proposal also starts child support payments at the date of conception and requires a father to pay half of pregnancy expenses, including the mother's share of insurance premiums. The father of a child conceived by rape or incest must also pay the full cost of mental counseling from the attack.

South Carolina currently has a ban on abortions once cardiac activity in a fetus is detected, which is usually about six weeks. But that law has been suspended as the South Carolina Supreme Court reviews whether it violates the state’s constitutional right to privacy. That leaves South Carolina’s older 20-week abortion ban as the current benchmark.

Abortion bans have had mixed success in state legislatures since Roe v. Wade was overturned. Indiana passed a ban in August that goes into effect later this month with the rape, incest and life of the mother exceptions. West Virginia’s Legislature could not agree on stricter rules during a special session in July.

And lawmakers in South Carolina suddenly started paying much closer attention to Kansas when nearly 60% of voters rejected a ballot measure that would have allowed the state’s Legislature to ban abortion. The states voted for Republican Donald Trump in nearly identical percentages in the 2020 presidential election.

Davis and Sen. Sandy Senn, who voted against the bill in committee, have said they can't support it as written. Another Republican senator, Katrina Shealy, said the state's current law is fine. Other senators have suggested privately that the General Assembly didn't need to rush into a special session and could have waited to see how the six-week South Carolina ban and total bans in other states worked out.

Davis told the committee he thinks the rights of a mother who is pregnant to control her own body have to be balanced with the rights of fetuses to their lives, so he considers both a ban on all abortions or allowing abortions any time during pregnancies too extreme.

Davis also said if the state is going to require more women to have babies, then they owe it to them to give them better prenatal care, their children better educational opportunities and birth control options so they don’t get pregnant.