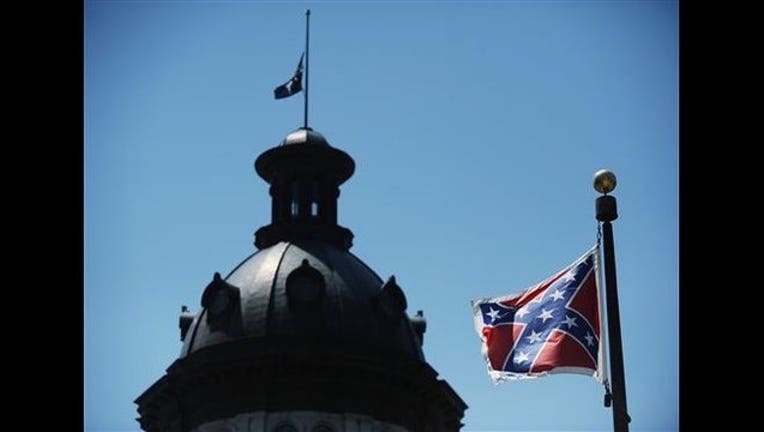 COLUMBIA, S.C. (AP) — More than 50 years after South Carolina raised a Confederate flag at its Statehouse to protest the civil rights movement, the rebel banner will be removed Friday in a state where such a reversal seemed unthinkable a month ago.

The flag will be pulled down from the Capitol's front lawn and the flagpole it flies on during a ceremony at 10 a.m. Friday, said Chaney Adams, a spokeswoman for Republican Gov. Nikki Haley. Then, the banner will be taken to the Confederate Relic Room for display.

Haley will sign the bill — which passed the state House early Thursday after 13 hours of debate — at 4 p.m. Thursday in the Statehouse lobby. The measure requires that the flag come down within 24 hours of her signature.

After the House passed the bill, there were hugs, tears and high fives in the chamber. Members snapped selfies and pumped their fists. But even among the celebrations, there was sadness.

Hours after the vote, Republican Rep. Jonathon Hill said he feared the move could be part of a regional or nationwide campaign targeting Confederate and Civil War-era history.

"Hopefully it ends here, and we move forward, and we can put all of this behind us," said Hill, one of 27 House members who opposed removing the flag on a key vote. He said he won't attend Friday's ceremony because of obligations in his district.

After the Civil War, the flag was first flown over the dome of South Carolina's Capitol in 1961 to celebrate the 100th anniversary of the war. It stayed as a protest to the Civil Rights movement, only moving in 2000 from the dome to its current location.

The push that would bring down the Confederate flag for good only started after nine black churchgoers, including state Sen. Clementa Pinckney, were gunned down during Bible study at the historic Emanuel African Episcopal Church in Charleston on June 17. Police said the white gunman's motivation was racial hatred. Then three days later, photos surfaced of the suspect, Dylann Roof, holding Confederate flags. He is charged with nine counts of murder and hasn't yet entered a plea.

"I am 44 years old. I never thought I'd see this moment. I stand with people who never thought they would see this as well," said House Minority Leader Todd Rutherford, who called the victims martyrs. "It's emotional for us not just because it came down, but why it came down."

Republican Rep. Rick Quinn, whose amendment appeared it might at least delay the flag's removal for several hours, was happy too after getting a promise that lawmakers would find money for a special display at the Relic Room for the Confederate flag that was about to be removed as well as the one that flew over the Statehouse dome in 2000 when a compromise was passed to move the rebel banner to its current location.

"It was done in a way that was a win to everyone," said Quinn, who voted for the bill.

The back-to-back votes came around 1 a.m. Thursday after more than 13 hours of passionate and contentious debate.

As House members deliberated well into the night, there were tears of anger and shared memories of Civil War ancestors. Black Democrats, frustrated at being asked to show grace to Civil War soldiers as the debate wore on, warned that the state was embarrassing itself.

Changing the Senate bill could have meant taking weeks or even months to remove the flag, perhaps blunting momentum that has grown since the church massacre.

Republican Rep. Jenny Horne reminded her colleagues she was a descendent of Confederate President Jefferson Davis, and scolded fellow members of her party for stalling the debate with dozens of amendments.

She cried as she remembered Pinckney's funeral and his widow, who was hiding with one of their daughters in a church office as the gunman fired dozens of shots.

"For the widow of Sen. Pinckney and his two young daughters, that would be adding insult to injury and I will not be a part of it!" she screamed into a microphone.

She said later during a break she didn't intend to speak but got frustrated with fellow Republicans.

Opponents of removing the flag talked about grandparents who passed down family treasures and lamented that the flag had been "hijacked" or "abducted" by racists.

Rep. Mike Pitts, who remembered playing with a Confederate ancestor's cavalry sword while growing up, said that for him the flag is a reminder of how dirt-poor Southern farmers fought Yankees not because they hated blacks or supported slavery, but because their land was being invaded.

Those soldiers should be respected just as soldiers who fought in the Middle East or Afghanistan, he said, recalling his own military service. Pitts then turned to a lawmaker he called a dear friend, recalling how his black colleague nearly died in Vietnam.

Black lawmakers told their own stories of ancestors. Rep. Joe Neal talked about tracing his family back to four brothers, brought to America in chains to be bought by a slave owner named Neal who changed their last names and pulled them apart from their families.

"The whole world is asking, is South Carolina really going to change, or will it hold to an ugly tradition of prejudice and discrimination and hide behind heritage as an excuse for it," Neal said.

Other Democrats suggested any delay would give Ku Klux Klan members planning a rally July 18 a chance to dance around the Confederate flag.

Instead, Democrats were using a line Gov. Haley often says, calling it "a great day in South Carolina."

The governor issued her own statement. "It is a new day in South Carolina, a day we can all be proud of, a day that truly brings us all together as we continue to heal, as one people and on," she said.