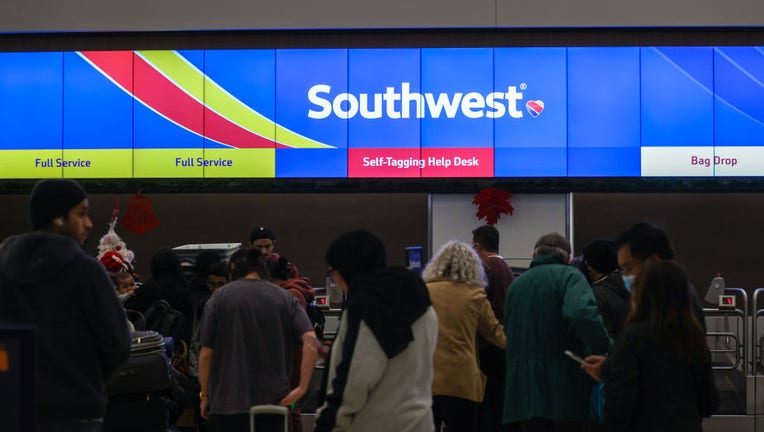 Thousands of Southwest Airlines flights were delayed or canceled nationwide on Monday, leading to growing criticism of the airline from disgruntled passengers and the federal government.

The airline canceled 2,886 flights on Monday, or 70% of scheduled flights, amid a winter storm impacting portions of the country, according to flight tracking website FlightAware. Every airline has had to cancel or delay flights over the last several days, but Southwest's totals are particularly high.

Of the more than 160 flight cancelations and more than 340 delays at Los Angeles International Airport that left passengers stranded as they attempt to return home after Christmas, 106 of the cancelations and nearly 30 delays were from Southwest flights, according to FOX 11.

Southwest said they are rebooking as many customers as possible and that people who have had flights canceled may ask for a refund or receive a credit, although rebooking depends on open seats on available flights.

Passengers at LAX said the earliest the airline could rebook their flight was December 31. Southwest Airlines' website shows there are no flights available departing LAX for Sea-Tac (SEA), New York (LGA) or San Francisco (SFO) through December 31.

And in Chicago's Midway International Airport, more than 300 flights were canceled as of 5 p.m. local time.

Passengers are frustrated with the airline and have said they did not learn of the problems until arriving at the airport for their flights. More than half of the Southwest flights at that airport were canceled Monday.

Southwest delayed 48% of flights on Sunday and 16% on Monday, and the airline has already canceled 60% of its scheduled flights for Tuesday.

Long lines at Orlando International Airport amid thousands of cancellations

Thousands of flights are cancelled or delayed across the U.S., including at Orlando International Airport. FOX 35 Orlando's Randi Hildreth gave LiveNOW from FOX's Josh Breslow a look around Orlando.

Now, the U.S. Department of Transportation is criticizing Southwest, saying the rate of canceled flights is "unacceptable."

"USDOT is concerned by Southwest Airlines’ disproportionate and unacceptable rate of cancellations and delays, as well as the failure to properly support customers experiencing a cancellation or delay," the department said in a statement. "As more information becomes available, the department will closely examine whether cancellations were controllable and whether Southwest is complying with its customer service plan, as well as all other pertinent DOT rules."

Southwest declined to comment to FOX News Digital about criticisms from passengers and the Department of Transportation, but pointed to an earlier statement in which the airline expressed "heartfelt apologies" and said it is working to "urgently address wide-scale disruption" with safety at the forefront.

"With consecutive days of extreme winter weather across our network behind us, continuing challenges are impacting our Customers and Employees in a significant way that is unacceptable," the airline said.

"We were fully staffed and prepared for the approaching holiday weekend when the severe weather swept across the continent, where Southwest is the largest carrier in 23 of the top 25 travel markets in the U.S.," the statement continued. "These operational conditions forced daily changes to our flight schedule at a volume and magnitude that still has the tools our teams used to recover the airline operating at capacity."

Southwest also said it will continue operating a reduced schedule by flying about one-third of its schedule for the next several days.