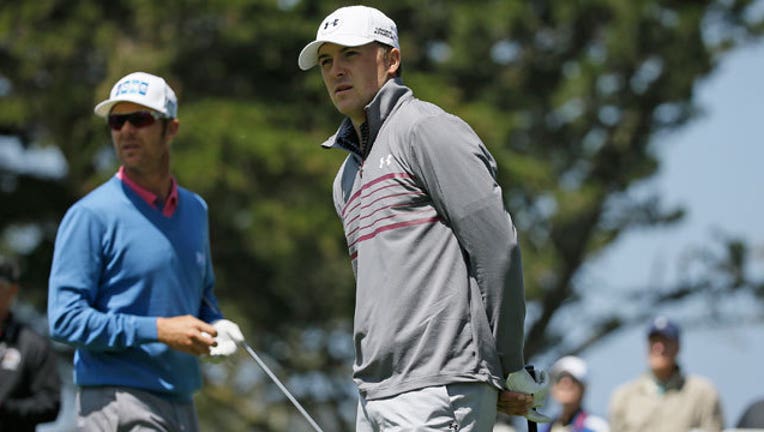 SAN FRANCISCO (AP) — Even with a new format, the objective didn't change in the Match Play Championship.

And neither did the emotions.

Masters champion Jordan Spieth, still equipped with that sporty short game, made seven birdies in 16 holes and had an easy time against Mikko Ilonen of Finland. Rory McIlroy, the top seed, made only one birdie and had an even easier time in beating Jason Dufner.

"Match play, you just need to beat the person that's in front of you, and I did that today," McIlroy said. "Now move on tomorrow."

Except with the new format, everyone moves on.

Unlike last year, Spieth and McIlroy could only celebrate a good start to a tournament that won't have any clarity until players start packing their bags. Round robin has replaced single elimination. No one really advances until after Friday — the player with the best record from each of the 16 four-man groups.

Defending champion Jason Day struggled off the tee and lost to Charley Hoffman. Justin Rose lost to Mark Leishman. Henrik Stenson and Jimmy Walker lost in extra holes. Matt Kuchar lost when Ben Martin made a hole-in-one on the 17th hole and they matched pars on the 18th.

Instead of going home, they have some hope.

But even without single elimination, one aspect of this World Golf Championship hasn't changed. There was plenty of agitation.

Ian Poulter was in no mood to talk after making only one birdie — on the 13th hole — in losing to Webb Simpson on the 16th hole. Neither was Walker, who went 19 holes with Gary Woodland. Adam Scott could leave fast enough after getting blown out by Francesco Molinari.

"Nobody wants to lose," Kuchar said. "I can assure you of that."

Kuchar never trailed in his match, and they were all square going to the long par-3 17th. Martin hit a hybrid into a cool breeze from about 235 yards that rolled toward the hole and swirled around the cup before dropping for an ace.

"I'd say under the circumstances, that's probably the best shot I've ever hit," Martin said.

He tried to keep his emotions guarded, knowing there was still a par 5 to play. Kuchar missed a 5-foot birdie putt that would have extended the match.

The 32 losers still had two more matches, but Thursday's round became even more critical. It's possible they can be eliminated Thursday. It's possible their Friday match will be meaningless. And yet all of them can still advance, although they will need some help.

"A lot has to work out now," Kuchar said.

Day never trailed over the final 53 holes when he won the single-elimination version last year in Arizona. The Australian fell behind with a bogey on the fourth hole against Hoffman, and this time he never caught up. And now, he has some catching up to do.

"Obviously, I need to go out there and win the next two," Day said. "And whatever happens, happens. If I sneak through, I sneak through. If not, then it's my own fault for losing. It's a different format, and I'm looking forward to seeing how it goes the next couple of days."

Spieth played as though nothing had changed from a year ago. He told caddie Michael Greller not to check the painted dots on the greens that would indicate the pin positions for the Thursday rounds.

"I wanted us to look at it like it was win or go home," Spieth said. "I think I did see him checking on a couple of them. But I wanted that to be our mindset. There's going to be a lot of 2-1 scenarios in each group, so it's best not to worry about anything else."

Spieth had few worries on a mild day of sunshine. He took only eight putts through six holes and building a quick lead. Ilonen holed a bunker shot on the par-3 ninth, and then rolled in a 20-foot birdie putt at No. 11 to get to within one shot. Momentum was on his side.

Spieth hit wedge just over a bunker to 4 feet for birdie, and then his 7-iron had just enough to finish pin-high next to the hole at the back of the 13th green.

"I played solid," Spieth said. "I think I made six birdies and a bogey? I'd take that the rest of the week."

Rose, coming off a victory Sunday in New Orleans, still wasn't sure what to think about the new format.

"Maybe I'd rather go home," he said. "I don't feel very hopeful right now, but I have a shot. So I guess that's a good thing."

— Hunter Mahan, one of five past champions in the field, had the shortest day in his 7-and-6 win over Stephen Gallacher of Scotland.

— Adam Scott had a birdie on the first hole and not another one the rest of the way. Francesco Molinari, who got into the field when Tim Clark chose not to play because of injury, beat Scott on the 14th hole.

— Kevin Na was 2 up with two holes to play when Joost Luiten birdied the 17th and 18th, and then the Dutchman won with a par on the first extra hole.

— Paul Casey won the longest match of the day, beating Chris Kirk in 22 holes. Casey made a 25-foot birdie putt on the 19th hole (the par-5 first), and Kirk halved the hole with a 10-foot birdie.