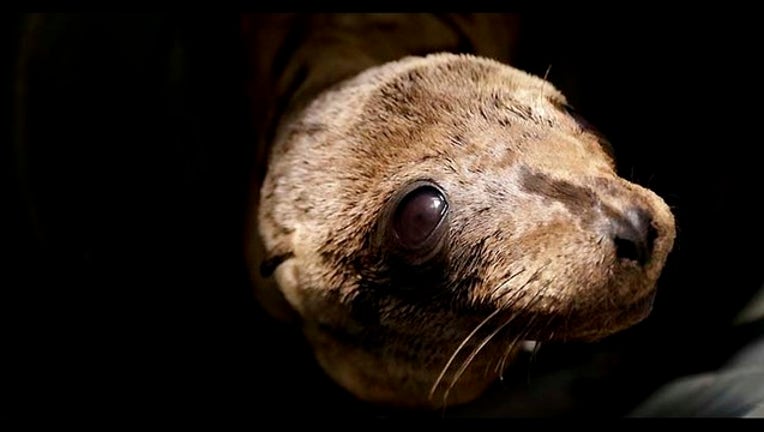 LAGUNA BEACH, Calif. (AP) — The starving sea lion pup was so tiny that it looked like a rock at the base of the seaside cliff until it struggled to raise its head as humans approached.

It bleated weakly as volunteer Brennan Slavik eased it into a crate for transport to a rescue center, where it peered from a child's playpen with woeful eyes made enormous by an emaciated frame.

At almost a year, the pup weighed just 23 pounds — a third of what it should — and staff quietly took it to a private room, euthanized it and moved on.

It's a scenario playing out daily in California this year as rescue centers struggle to keep up with hundreds of sick and starving sea lion pups washing up along the coast. More than 1,650 pups have been rescued since January from beaches, but also from inside public restrooms, behind buildings and along railroad tracks.

It's not unusual to have some sea lions wash up each spring as the pups leave their mothers, but so far, the number of stranded babies is more than five times greater than in 2013, the worst season in recent memory.

"These animals are coming in really desperate. They're at the end of life. They're in a crisis ... and not all animals are going to make it," said Keith A. Matassa, executive director at the Pacific Marine Mammal Center, which has taken in 285 pups this winter compared with 28 during the same period last year.

The situation is so bad that Sea World suspended its sea lion show so it can focus on rescue efforts. The theme park has treated 400 pups — more than twice the number it would care for in a typical year — and constructed two temporary pools to house them.

Scientists aren't sure what's causing the crisis, but suspect that warmer waters from this winter's mild El Nino weather pattern are impacting the sea lion birthing grounds along the Channel Islands off the Southern California coast.

The warm water is likely pushing prime sea lion foods — market squid, sardines and anchovies — further north, forcing the mothers to abandon their pups for up to eight days at a time in search of sustenance.

The pups, scientists believe, are weaning themselves early out of desperation and setting out on their own despite being underweight and ill-prepared to hunt.

Sea lions wouldn't normally start showing up in large numbers until April or May but this year, rescue centers began to get calls in December, said Matassa.

"They're leaving with a very low tank of gas and when they get over here, they're showing up on the beach basically ... starving to death," said Justin Viezbicke, a coordinator with the National Oceanic and Atmospheric Administration's California Stranding Network.

For rescue centers like the one in Laguna Beach, that translates into round-the-clock, back-breaking work for dozens of volunteers who've arrived from all over the U.S. to help.

The center in one of Southern California's premiere beach communities has rescued more than 213 pups since the beginning of the year and has treated ones that weighed as little as 14 pounds at eight months old.

Pups that should be gaining 20 to 40 pounds in a two-month period have put on just 2 pounds, Matassa said.

On a recent day, in the course of two hours, five suffering animals came into the Pacific Marine Mammal Center. One was brought in by a police officer, three more came in with an animal control team and the fifth was Slavik's rescued pup that had been called in by a couple walking along beach.

Harried volunteers moved urgently along a narrow hallway between pens as they unloaded each one, wrapped it in a towel and performed a battery of tests. Most of the animals were so weak they barely resisted.

Crates holding animals awaiting assessment were crammed into every corner, including the laundry room, as those already housed in communal pens barked and bleated in a deafening racket as mealtime approached.

Each incoming pup has its temperature taken and is weighed, measured and given a blood sugar test before the team decides if they can save it.

Those that make the cut are tube-fed a gruel of pureed herring, Pedialyte, vitamins and milk three or four times a day after starting out with a simple broth of hydrating fluids and dextrose.

Those that graduate to whole fish are playfully called "feeders" and those that can once more compete for fish tossed into a pool are called "fighters."

The goal is to get the pups strong enough to swim free again — but the volunteers who nurse them back to health may never know if they make it in the wild.

Only a handful will be fitted with expensive tracking devices. The rest are tagged with a number and fall off the radar unless they are rescued again.

"The tricky part is we're putting them back into the same environment that they just came from. And that's going to be a challenge for them," Viezbicke said.