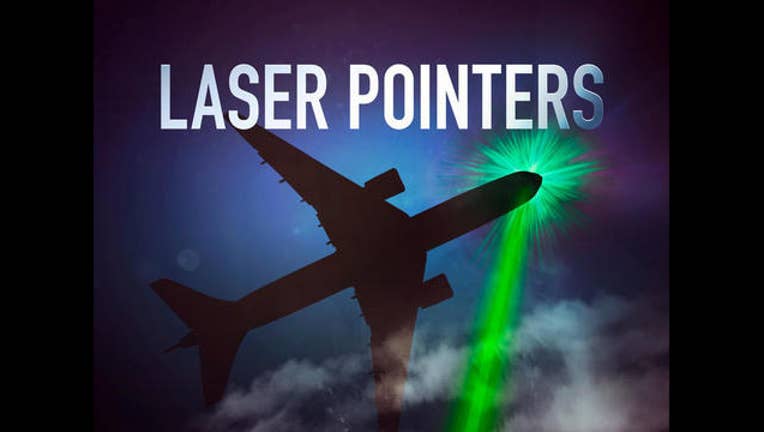 LANSING, Mich. (AP) -- Michigan State Police pilot Jerry King was flying his state plane back to the Lansing airport after a mission when he saw a green pulsing light in the night sky.

Suddenly, he was blinded by a bright flash, much like staring into a camera flashbulb as it goes off, and he was unable to see for several seconds.

"It'll seem like 10," said King, who was shaken by the experience. "If you lose control of the aircraft, that's it. It's not like a co-pilot's going to take over."

The cockpit of the single-engine plane was hit by a laser beam directed by someone on the ground.  Such incidents once happened occasionally to pilots, as laser devices became commonly available to amateur astronomers, construction engineers and others, but now are reported at least 7,000 times a year.

Michigan is poised to join a growing list of states enacting new laws to combat increasingly frequent laser attacks and put those responsible in prison. Twenty-two states now have passed such laws, most in the last few years.

The Michigan legislation was approved unanimously by the Senate Tuesday and could be referred to Gov. Rick Snyder for his signature as early as next week. It would make "lasing" an aircraft or train a felony punishable by five years in prison.

Though there have been no known air crashes caused by laser strikes, some pilots have been injured, and authorities are alarmed by the danger of pilots temporarily blinded as they are landing or taking off at airports. King sustained a flash burn in his left eye, requiring a trip to an ophthalmologist and a course of eye drops.

Pointing a laser at an aircraft is currently a federal crime punishable by up to five years in prison and a $250,000 fine, but enforcement has been difficult in part because of the complicated coordination necessary between federal and local officials. Only 70 people have been charged between 2012 and 2016.

Authorities believe the state laws will make it easier to quickly deploy police to the site of a laser attack.

State police helicopter pilots in some cases can swiftly head to where the beam is originating and alert patrol cars for assistance. Police armed with high-tech cameras and GPS trackers can be used in places where attacks are most frequent, such as around airports.

"We could prosecute them at the state level right then. We don't have to contact the FBI and wait for agents to be able to have time to do that and a U.S. attorney who is involved with high-level matters to worry about this," said Sgt. Timothy Fitzgerald, legislative liaison for the state police. "Once we start enforcing this, I think we're going to see these incidents go way down."

Lasers have become more powerful and cheaper in recent years. Popular green lasers cost as little as $10, and are more visible than red ones.

Hobbyists use them to point at stars and construction crews use them for leveling. Some of the people who point them at aircraft are pranksters, but others deliberately target law enforcement aircraft involved in police chases and surveillance. Three of the four full-time pilots in Michigan's aviation unit have been struck by lasers.

In February, state police arrested a man suspected of repeatedly shining a laser at one of its helicopters and three passenger jets on approach to the Detroit Metropolitan Airport.

"That's actually how they honed in on him. As he keeps shooting it, they keep narrowing his location," Fitzgerald said.

A week later, a Delta airliner was lasered while approaching the Gerald R. Ford International Airport in Grand Rapids.

Recently, Michigan extended the authority of airport police to respond to laser attacks beyond airport boundaries.

"When you have pilots testifying that it's very hazardous," more has to be done to stop the attacks, said Rep. Laura Cox, a sponsor of the new Michigan legislation. "We don't want any crashes."